Chickens love to drink. Fortunately, their favorite beverage is cool clean water. During summer’s inferno their panting helps them stay cool but to stay hydra
www.scoopfromthecoop.com

Chickens can’t hydrate from ice or snow and must have liquid water available. During extreme cold a bucket or waterer freezes solid in just a few hours.

For centuries cold climate chicken keepers had to deliver buckets of water to the coop several times a day then retrieve, and thaw ice filled containers. That remains an effective way to keep liquid water in the coop but constantly delivering water several times a day is wearisome.

Fortunately, there are easier ways to keep coop water liquid no matter how low the temperature sinks...

The steady increase in the price of protein feed ingredients and the retraction of antibiotics from diets has encouraged nutritionists to search the alternatives for protein source and functional feedstuffs that can substitute the role of antibiotic growth ...

It is generally known that seeds of tropical fruits are rich in phytochemicals that may be essential to control and modulate the population of pathogens in the gastrointestinal tract of humans and animals...

Papaya seed is agro-industrial by-product that is rich in protein and exhibits the growth-promoting effect, antimicrobial and antiparasitic activities, and immunomodulatory and antioxidative activities that are worthwhile as a functional feedstuff for substituting the role of antibiotic growth promoters for poultry.
Last edited: Jun 17, 2021 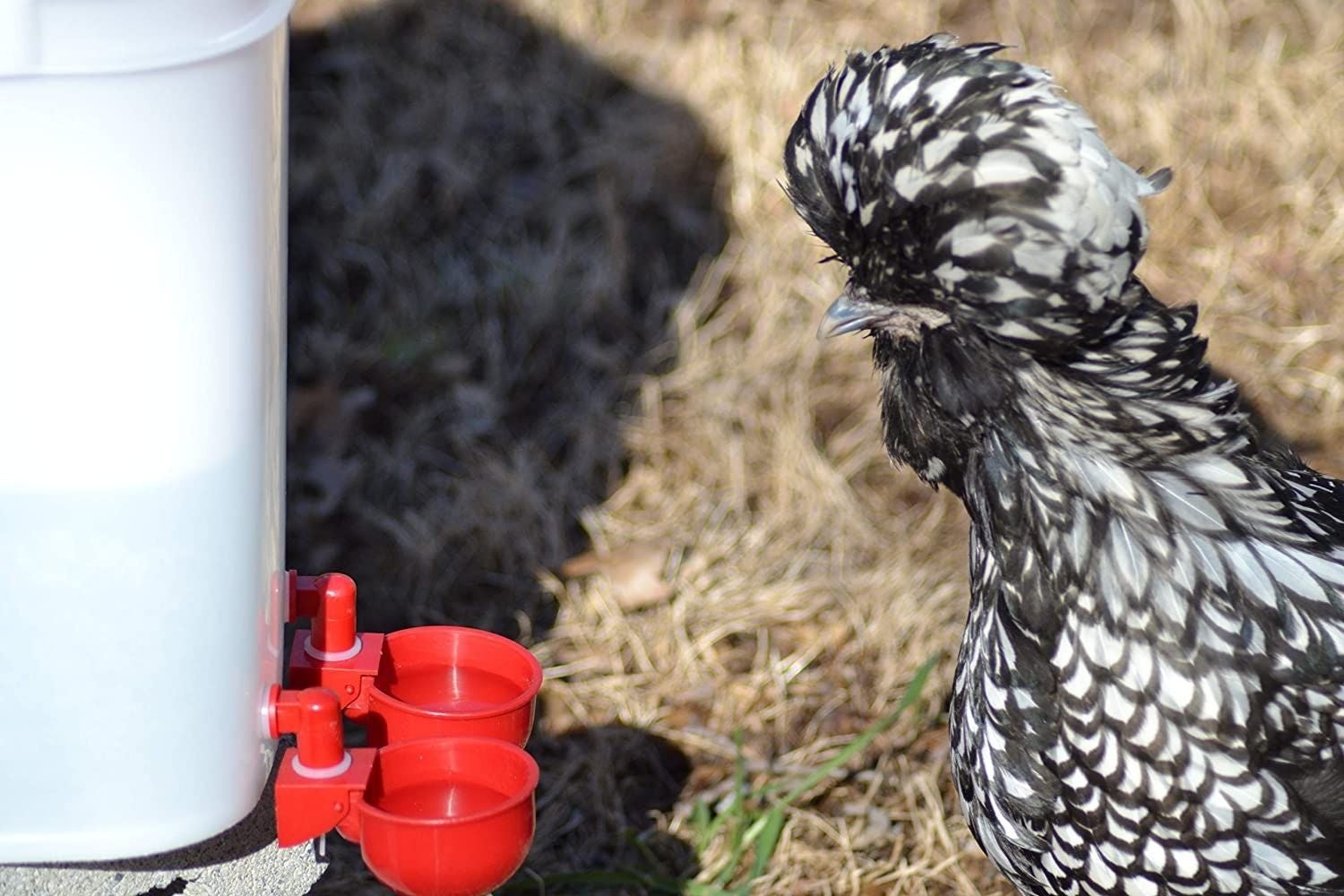 The Best Chicken Waterers of 2022

Supplying your chickens with ample, easily accessible fresh water is key to their health. This buyer’s guide has top picks for the best chicken waterer.

Time to Feed Your Breeders

What is the optimum time of day to feed growing and adult hens and roosters? As with most questions, the answer is "it depends" and this situation certainly applies to feeding breeders. For growing birds the variables are ability to observe feeding behavior, and potential effects of heat stress. With adult birds we have the added factors of eggshell quality and conflict of time associated with mating or nesting...

Breeder hens consume their feed in 2-6 hours each day. This large variation in feed clean-up time relates to diet energy level, feed texture and perhaps most importantly, environmental temperature. In hot climates breeders often take much longer to eat feed, and this is especially true of high-yield strains. Most managers consider this extended feeding time to be advantageous, because it ensures more even allocation of feed across the flock where even the most timid birds have time to eat...

Early morning feeding in breeders is usually recommended because all associated factors and consequences of this practice are positive for the bird and the production of settable eggs. The only concern is with mechanical feeders where there is a temptation to feed too early in the morning, and before staff are present to observe bird activity. 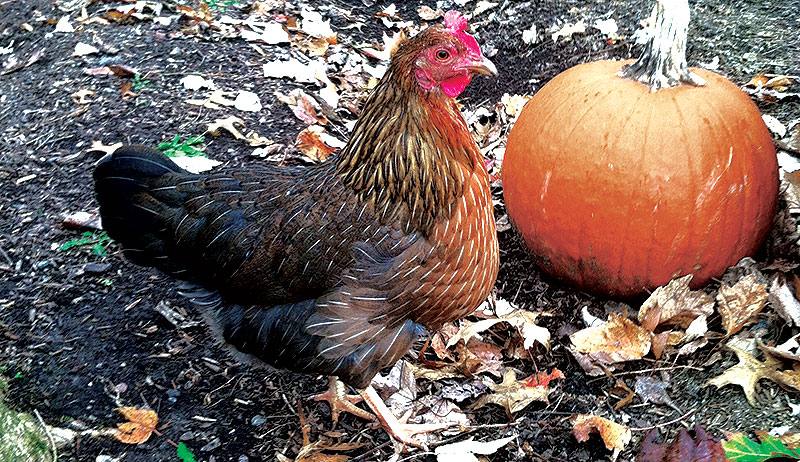 What Every Chicken-Keeper Should Know About the Crop - Hobby Farms

New chicken-keepers sometimes mistake the crop for a tumor. Learn where the crop is located, what it does and what can go wrong with it.

Why does a chicken have a special food storage pocket at all? The answer relates to the chicken’s unenviable status as a prey animal. Chewing food is time-consuming, and the more time spent in open fields or pastures foraging and chewing, the greater the risk of being located and eaten by a predator.

The crop is part of a digestive system that lets chickens ingest food quickly, stash it in this take-out container and break it down into smaller pieces after having reached a safe location. One might say the chicken is the original fast-food consumer.

Trauma scissors -- which are very sharp but relatively safe to use -- are my favorite backyard chicken accessory since I discovered their chicken benefits by accident (after no longer needing them as a caregiver).

I mostly use them for trimming chicken butt feathers. (Something you never realize when you get chickens, is that when they diarrhea, they can get "chicken butt.")

I also use them now for my one chicken with a scissor beak to trim off a little on the long, askew bottom beak (which is like nail trimming for a dog with black nails -- you have to cut a little at a time to be careful to not cut the quick or even the chicken's tongue if she sticks it out).

In the Amazon reviews, one person said they used the trauma scissors to cut chicken wire.
Last edited: Apr 7, 2022 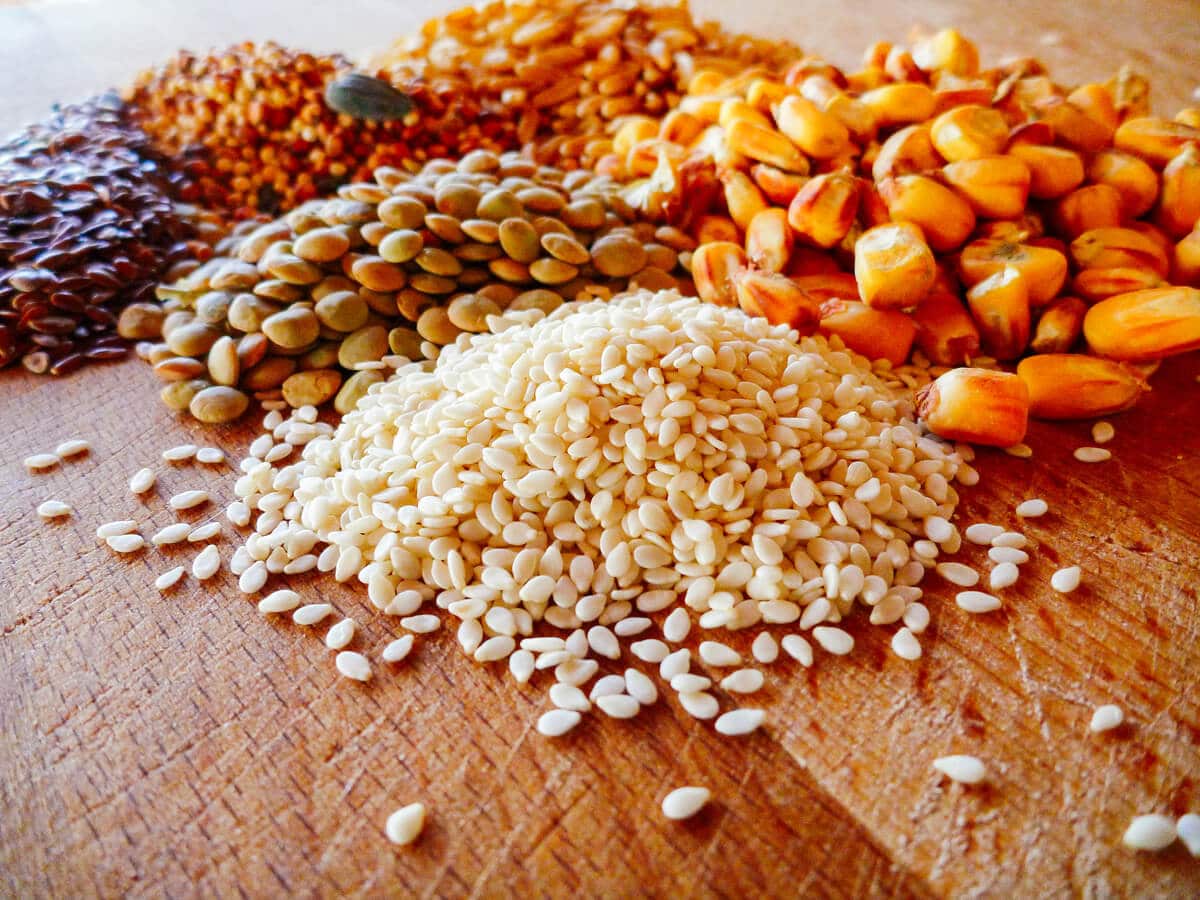 Update: I also have a soy-free corn-free version of my homemade whole grain chicken feed! For easy formulating, download Garden Betty's Chicken Feed Calculator to manage costs, calculate protein content, and custom mix your feed on the fly. More than nine years ago, I started mixing my own soy-fr 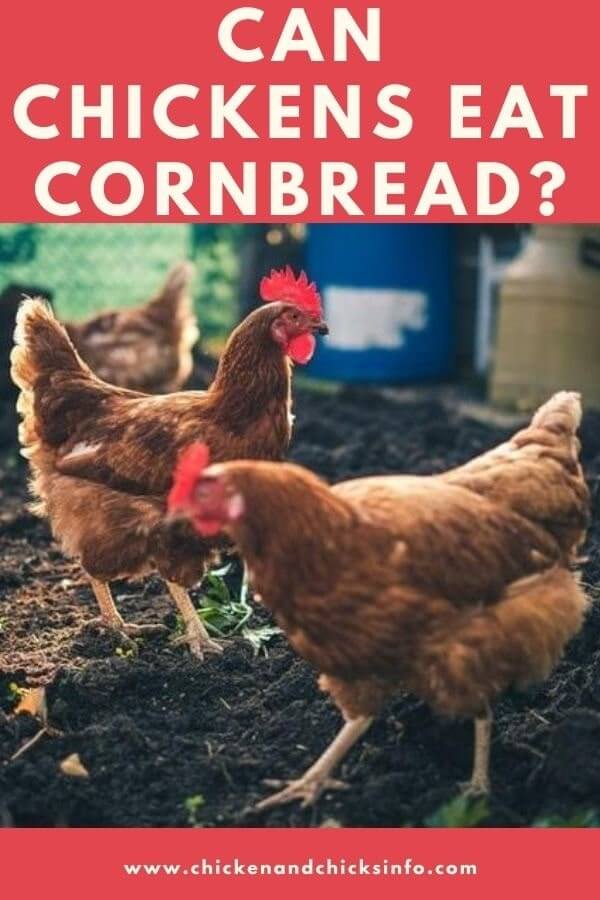 Can chickens eat cornbread? Cornbread is fine for chickens in moderation. There is some decent nutrition in cornbread, and I suggest a chicken-friendly recipe.

All you need is:
Mix up all the ingredients and pour the mixture into two baking dishes. Place them in a preheated, around 425 F should do, and bake for around 20-25 minutes or until you can see it’s cooked.

JustAnswers provides a paid service to talk to vets about chickens another other poultry:

Use of Medicinal Mushrooms in Layer Ration

The extensive use of antibiotics in the poultry industry to increase production performance has led to human health hazards. The use of natural herbs as antibiotic substitutes has been reported in the poultry feed industry. Therefore, the objective of ...

Biosecurity is the key to keeping our nation’s poultry healthy. USDA’s Defend the Flock education program offers free tools and resources to help everyone who works with or handles poultry follow proper biosecurity practices. These practices will help keep your birds healthy and reduce the risk of avian influenza and other infectious diseases. Biosecurity is everyone’s job. Become a Flock Defender today and help us protect all flocks!

Bird flu is highly contagious in domestic flocks, and a major outbreak is underway in the US. A veterinary scientist explains what consumers need to know. 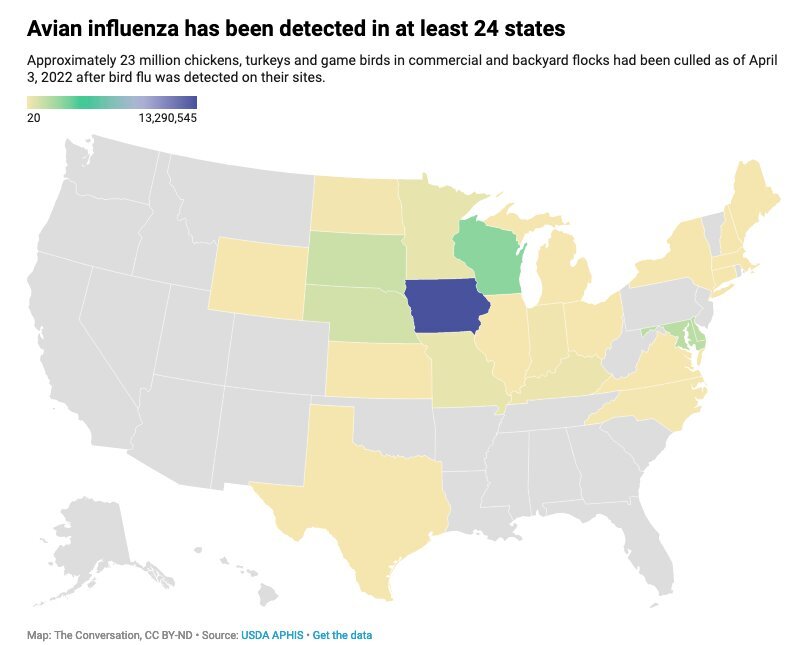 Brahmas are the largest-size breed I have, and with their thick layers of feathers, are considered winter chickens, with feathers covering their feet. However, they do just as well as my other chickens in the summer.

Like other larger chicken breeds, they are way more prone to bumblefoot. So it is important to make sure they have mud-free areas during periods of rain. Muddy areas can be easily covered with pine/wood pellets, which are sold as horse bedding. Brahmas may also be more prone to sour croup. One of them died a couple years ago with sour croup, so I rarely give my chickens human treats or even bread.

Not only are Brahmas naturally larger than most chickens, they also have a big appetite like most meat birds. Brahmas are a hybrid breed used for both meat and eggs. Of all the hens to free range (at least occasionally), these are the ones since they need more exercise to balance their caloric intake.

Below is a recent picture (three of my five Light Brahma hens during their free-range time): 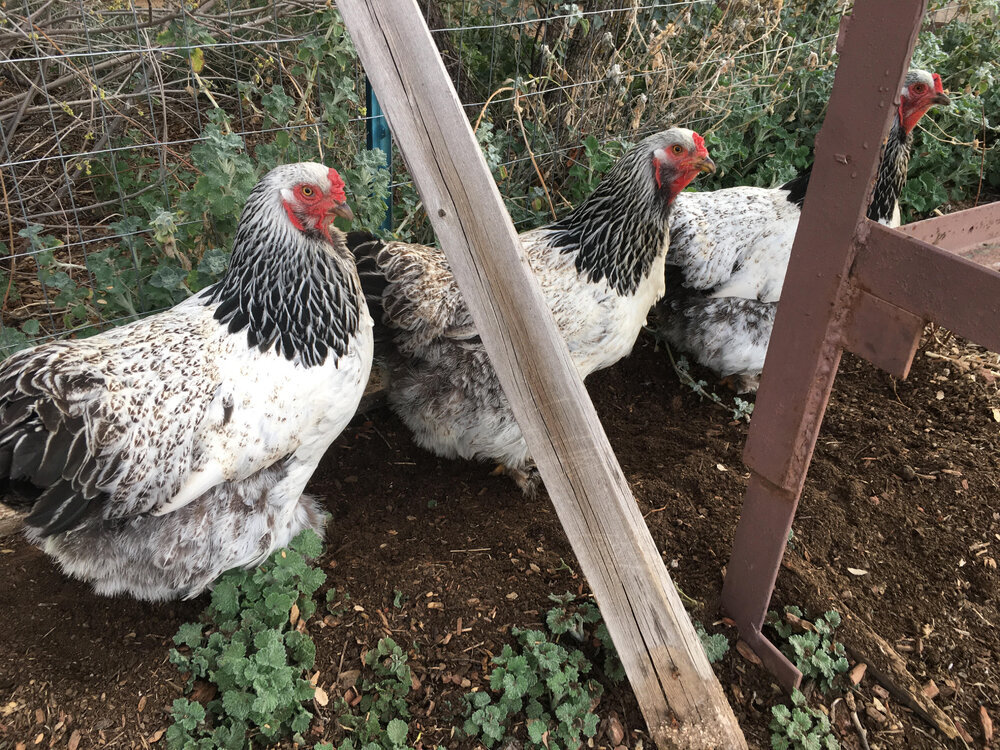 Some historical info at Wikipedia: 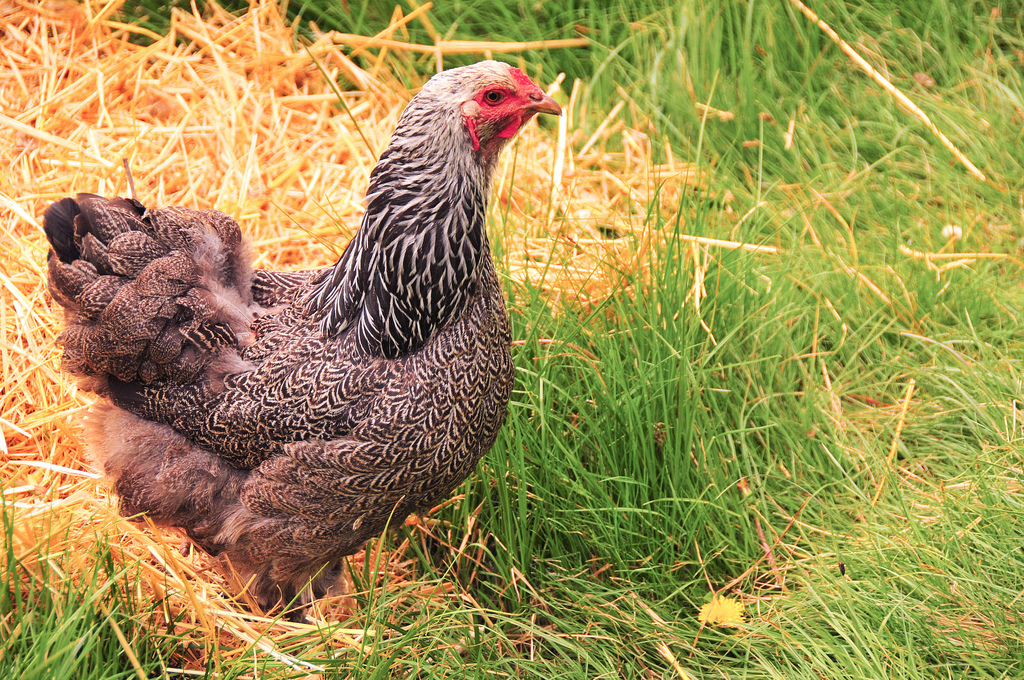 The Brahma is an American breed of chicken. It was developed in the United States from birds imported from the Chinese port of Shanghai...

Brahmas were first exported to England in December 1852, when George Burnham sent nine "Gray Shanghaes" to Queen Victoria as a gift. The Dark Brahma variety was developed by English breeders from this stock, and later re-exported to the United States.

The Brahma was an important meat breed in the United States from the 1850s until about 1930. It is a good winter layer of large brown eggs, which weigh approximately 55–60 g.
Click to expand... 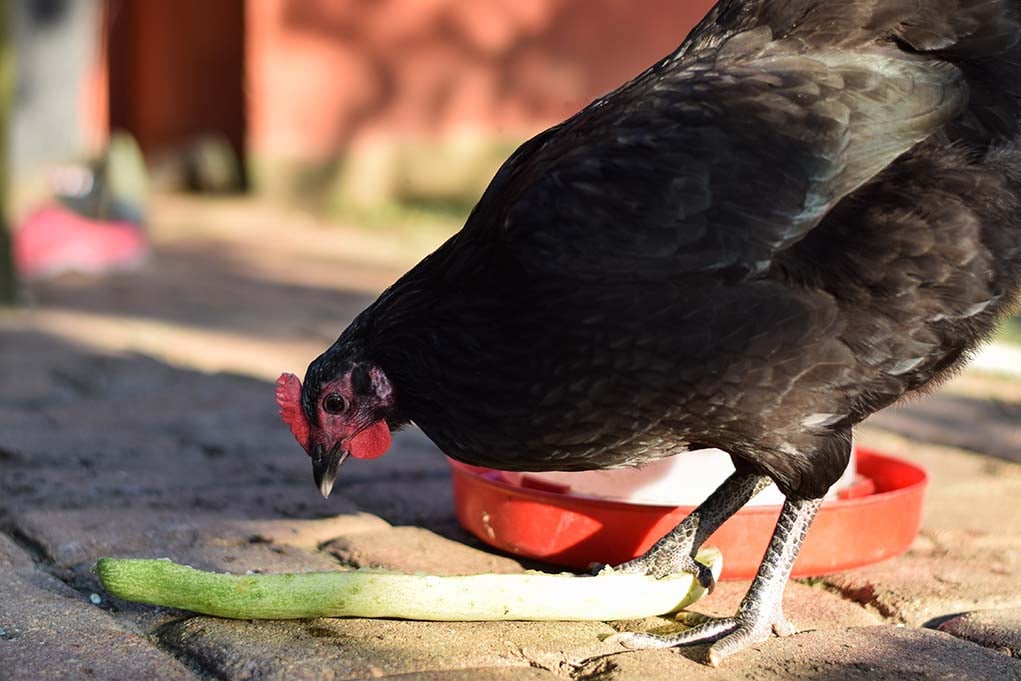 I love nothing more than spoiling my chickens with leftovers and homemade treats. Like me, you might be feeding your chickens to death?

An excessive intake of fatty foods such as suet (flock blocks) and sunflower seed can cause Fatty Liver Hemorrhagic Syndrome. It is as nasty as it sounds, and it can kill your hen without much warning...

Typically hens who suffer from this disease are usually 20% or more overweight and are laying hens...

It really is a vicious cycle- the hen becomes obese, doesn’t want to exercise, so they eat more. They also tend to lay oversized eggs.

Oversized eggs may sound great – who doesn’t love a large egg? However, these oversized eggs can cause egg binding, a potentially fatal occurrence in the hen.

The largest directory listing of veterinary practices who treat chickens, ducks and other pet poultry.

The two silkie hens I have will do a purring-like sound when brooding over eggs. (They originally lived in someone's house as pets, but the lady who owned them couldn't take them to her new house.)

And, of course, all of the chickens will run to you if you shake a bag of treats
Last edited: May 5, 2022

As evidence of how unwanted roosters are (mostly due to their noise and aggressiveness), one guy drove four hours to deliver/rehome one to a new home--for free.

Like a lot of rural backyard chicken people, I like rooster sounds but not the rooster personality. As "protectors," roosters will attack the hand that feeds them. I always use a 5-gallon water bucket to create a wall between me and a rooster. Even a small silkie rooster is just as aggressive in personality, if not more so, than a big rooster. (Especially in the old days when backyard chickens were more for meat than they are now, roosters were obviously the first to go to the dinner plate.)

On the positive side, roosters will hilariously make a big deal about any treat you give them--as a way to attract hens.
Last edited: May 8, 2022

Fenbendazole is the only broad-spectrum dewormer FDA approved for chickens (both layers and broilers).

Piperazine only kills roundworms but is also FDA approved. 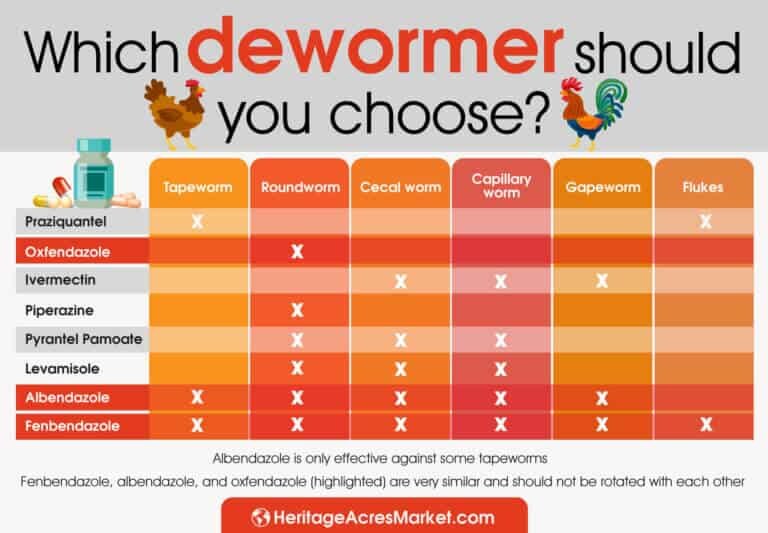 Everything You Need To Know About Chicken Combs

The vast majority of chickens have combs. Why is that? The chicken combs are very unique and important part of the chicken as you will learn.

Combs that are pale or shrunken may indicate that something is wrong with your bird. It may mean she is anemic (think lice and mites), is overloaded with worms, has heat exhaustion, or is molting...
Last edited: May 20, 2022
You must log in or register to reply here.
Share:
Facebook Twitter Email Link