Cross Beak / scissor beak can be severe, but many times, this beak malformation is not hazardous to your chicken's health.
blog.mypetchicken.com

Cross beak is one of the first signs to look for in poor genetics, along with twisted toe and stiff leg in your chicks. The main cause for this type of poor gentics is usually line breeding (father to daughter and mother to son or brother/sister consectutively). To prevent these types of defects from croping up you should observe good animal husbandry practices.
Last edited: May 30, 2022

I was freaking out when I first learned about chicken mites and lice There is a lot of blissful ignorance when people get chickens for the first time. 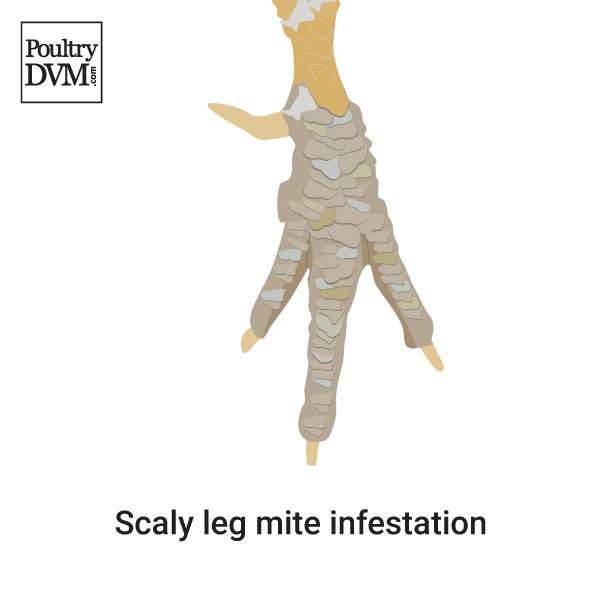 Scaly leg mites (Knemidocoptes mutans) are a relatively common ectoparasite found in adult backyard chickens, turkeys, and pheasants worldwide. These mites are extremely tiny (not visible to the naked eye) and will spend their entire lives (10 to 14 days) burrowing tunnels underneath the... 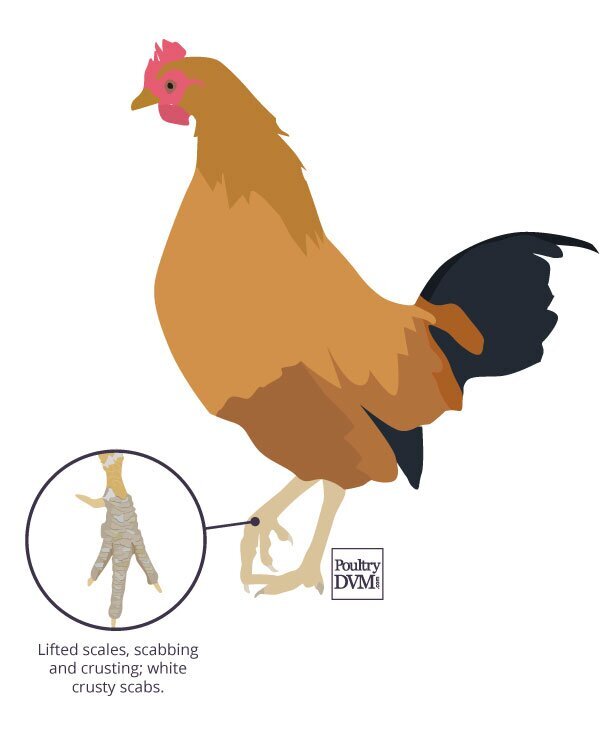 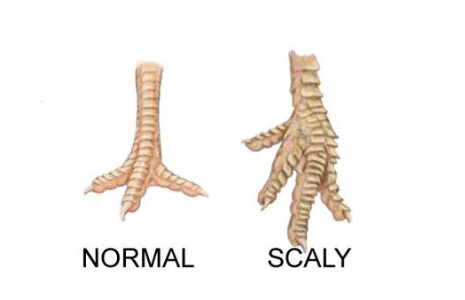 The scaly leg mite (Knemidocoptes mutans) is a tiny pale gray round creature, only about 1/100-inch in diameter. Despite its small size, in large numbers

Scaly leg develops gradually and is more likely to be obvious in older chickens, but it also affects young chickens kept with old chickens.

How well do Guineas fowl deal with winter cold, snow and ice?…

Guinea fowl are extremely hardy and will cope with the whole range of climates but they don't have the same adaptation in their legs to preserve body heat that chickens and ducks do. Chickens and ducks have fine networks of blood vessels in the legs that are able to work as heat exchangers.

My local feed store started selling a new chicken spray. And now my chicken coops smell luxurious! Other anti-parasite sprays will neutralize odors but this one really smells great too: 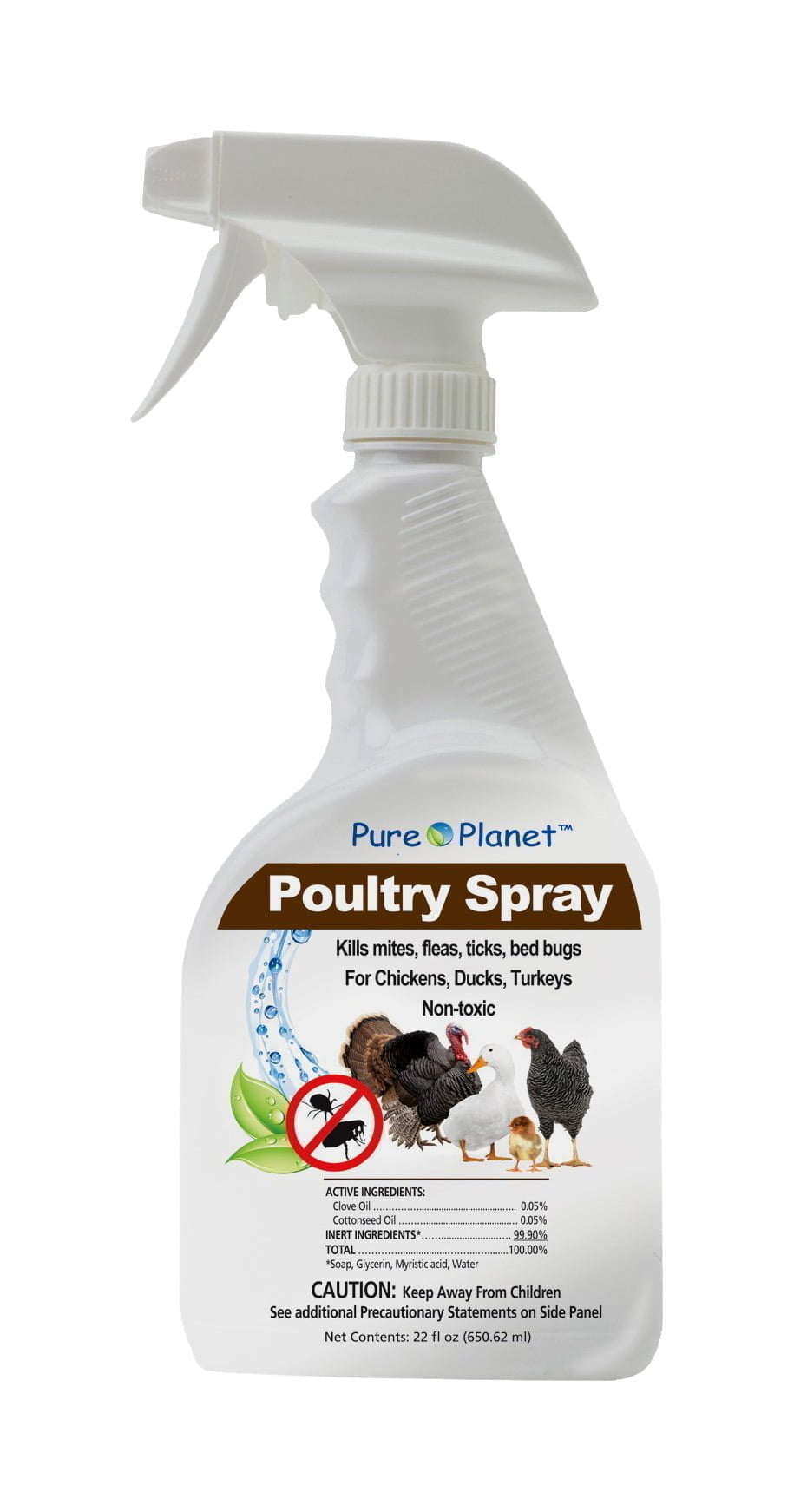 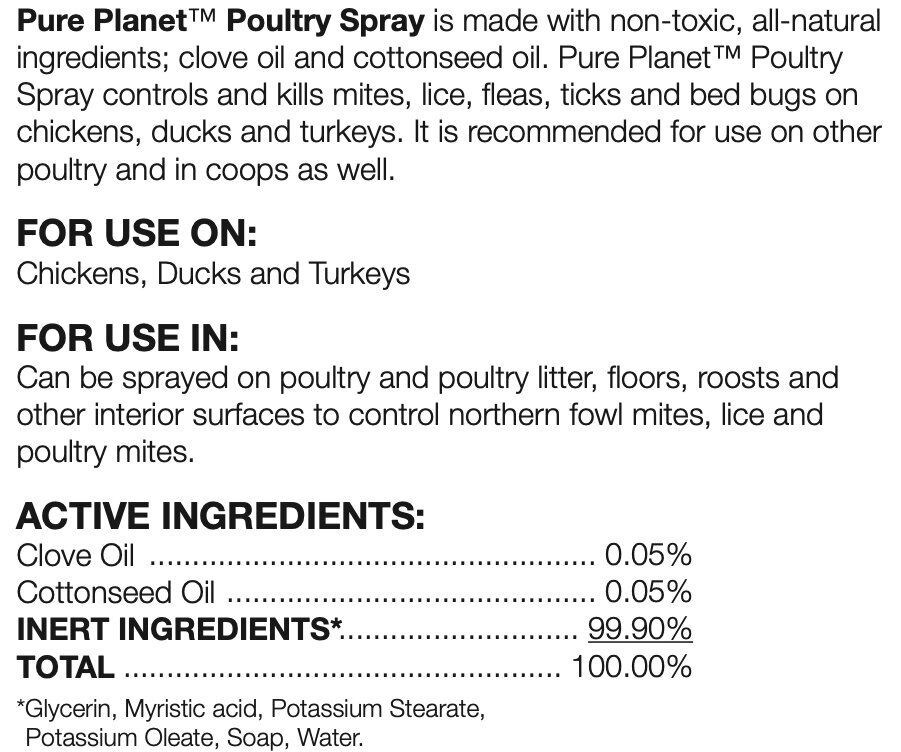 Roosters are Delightful! Why Stop at Just One?

At some point or other, we’ve all heard someone complain that roosters are too loud and too noisy. But when you understand that a rooster’s crowing signals that all is well in the world…

In summary, the main methods of keeping multiple roosters include:

I just talked to a lady in my county who breeds rare chickens as a hobby. She says her adult Ameraucana rooster (which is rare because it is lavender) is so docile that he will eat out of her hand. I believe her since my Ameraucana hens are the most docile chickens I have.

The mature Bantam rooster I have is less aggressive now that he has free range, but he still wants to fight me every week or so when I pass by him -- until I reach for a broom On the positive side, he is the most beautiful chicken I have.
Last edited: Jun 20, 2022 Clean Water: An Important and Often Neglected Step for Happy and Healthy Chickens

Clean Water: An Important and Often Neglected Step for Happy and Healthy Chickens

One way to help our chickens stay cool is to supply them with cold water. Ingestion of cold water serves as a heat sink in the digestive track thereby lowering core body temp. Keeping the water cold can be as simple as putting ice cubes in the water daily. The benefits are numerous and pay dividends with respect to egg production.

Specifically, chickens that are hot will not eat their normal ration. Consequently, in the summer many chickens do not get there normal ration and allotment of Calcium and Phosphorous which are essential for egg production. In addition, poor appetite can contribute to depressed growth and poor mineralization resulting in rickets in young birds and ostemalacia in older birds which can furthermore result in bone fractures. In addition, these type of deficiencies result in reduced egg production and soft shelled eggs which are more fragile and hence crack more often.

Neoplasia or lymphoproliferative disease was the most common primary diagnosis and involved 42% of the total birds autopsied; 63% of these cases were diagnosed as Marek’s disease or leukosis/sarcoma. Bacterial, parasitic, and viral organisms were commonly detected, involving 42%, 28%, and 7% of the birds autopsied, respectively, with 2 or more organisms detected in 69% of birds. Our findings demonstrate the importance of educating flock owners about disease prevention and biosecurity practices. 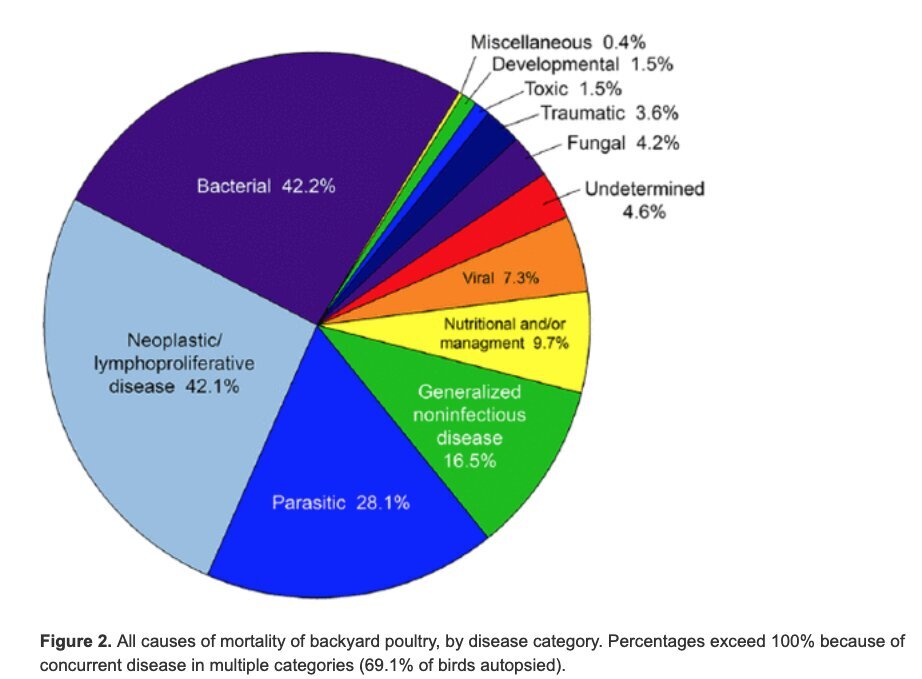 Freezing watermelon or other chopped fruits/veggies with water into an ice block works well to keep hens cool and busy without excessively filling them up. Feeding hens layer rations in the early morning or late evening when temperatures are lower will aid in increasing feed consumption.

Even if you aren’t able to be home during the day, ice blocks or frozen bottles can be placed out in the morning, and misters and fans can be set up on a timer to come on automatically when temperatures begin to climb. With just a little help, backyard birds can make it through the high temperatures of summer unscathed.

A limping chicken is no minor issue in a backyard coop. Often, this is a sign of bumblefoot. Bumblefoot is a bacterial infection or abscess of the foot. Treatin

Use gloves to examine or treat birds suspected of having bumblefoot, because the staph or other bacteria that cause the abscess can infect humans. Put the bird in a cage with clean, soft litter such as pine shavings. Isolate the bird from other chickens because the bacteria could infect them too.

In early stages, administering antibiotics may be all that’s needed. Several registered antibiotics are available for chickens: lincomycin and amoxicillin are two common ones. Many can be purchased at farm stores, or you can ask a veterinarian where to get them. Read and follow the label directions to determine the correct dosage and find out how to administer the antibiotic to birds. You must give the antibiotics for the full time the label directs.

Excerpted from my favorite chicken book:

It is very hard to catch guinea fowl, even in their coops. A trick I learned by accident since I didn't have a net: Water them a little with a hose. The water on their feathers makes it harder for them to fly away.

Guinea fowl are very loud and active throughout the day and evening, so most of my neighbors are quite aware of them. On the positive side, I haven't seen any snakes anywhere: 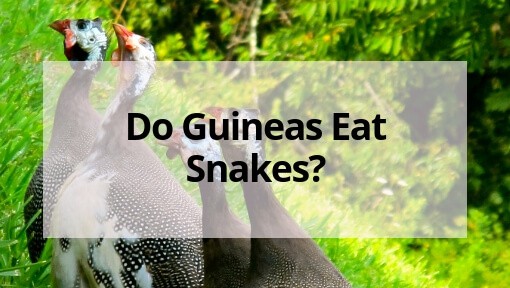 A major pro for guineas is that they will take care of your snake problem. Find out the truth- do guineas eat snakes for real??

guinea has string on its foot, help pls!!

ok one of my guinea males has a cotton string on his toes on the inside of his foot, we got the rest off but its still on these 2 toes and he wont let us help get it off or pick him up what should we do? i was thinking a sedative so we could pick him up and cut it lose? its really starting to...

"Throw all feed sack strings in an empty bag or trash can immediately or you will see it around a bird's foot."
Last edited: Jun 25, 2022

Receptors which respond to noxous stimulation (nociceptors) have been identified and physiologically characterised in many different part of the body of the chicken including the beak, mouth, nose, joint capsule and scaly skin. Stimulation of these nociceptors produces cardiovascular and behavioural changes consistent with those seen in mammals and are indicative of pain perception...

Changes in motivation can reduce pain-related behaviours and it has been hypothesized these motivational changes act by way of altering the attention of the animal away from the pain (Gentle, 2001). The degree of pain suppression ranged from marked hypoalgesia to complete analgesia and these shifts in attention not only reduced pain but also significantly reduced peripheral inflammation (Gentle and Tilston, 1999).

Foot pad dermatitis was identified as a welfare concern by the Alberta broiler industry. However, there are no published studies...

Foot pad dermatitis was identified as a welfare concern by the Alberta broiler industry.

Mean prevalence of foot pad dermatitis for each assessment method was 28.7% (on-farm).

Legislation mandating use of pine shavings on farm is recommended, but emphasis should be placed on ensuring producers are assessing foot pad dermatitis on-farm.
Last edited: Jun 25, 2022 How to Transport Chickens: 4 Tips that Reduce Poultry Stress Chances

Learning how to transport chickens in a way that preserves health and maintains high poultry productivity requires minimizing the chances of poultry stress.

"Using small crates that can hold two or three chickens is the best way to move your flock. The snug quarters will prevent movement during transportation and the company of other chickens will keep them calm."
Last edited: Jun 25, 2022 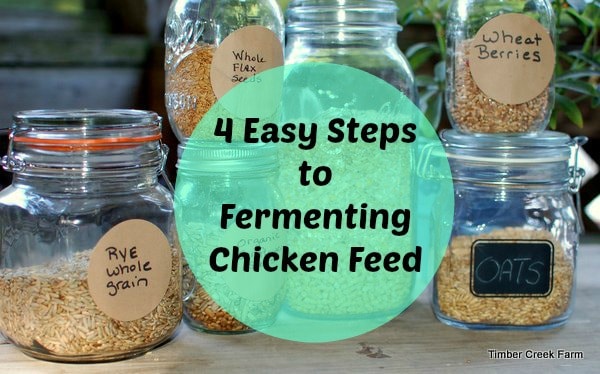 Fermenting chicken feed is one of the easy things you can do to increase the available nutrients from commercial feed. Only four easy steps to healthy grain

Vetster vets and techs who mention poultry in their profile: 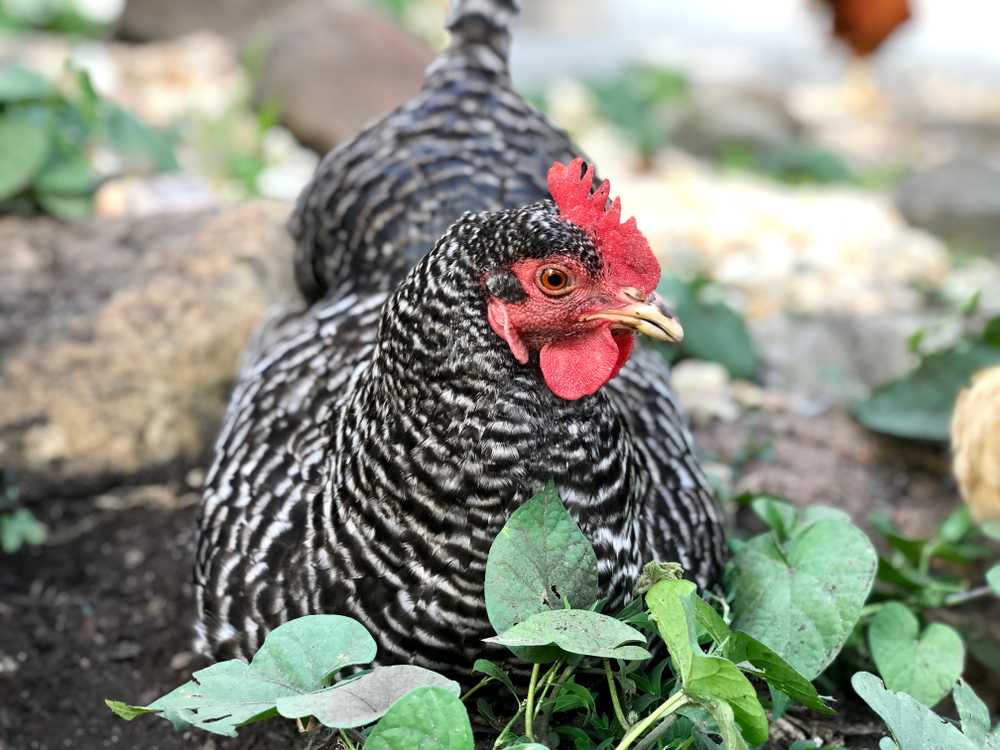 Keeping Chickens Taught Me How to Give a Cluck

Our family’s backyard chickens, acquired in the early days of the pandemic, have shown me how to slow down and rethink my moral principles.

"Because of their presence, I have learned a new rhythm. I have slowed down my tempo." New version of the OFFSP manual | Chicken Farmers of Canada

Chicken Farmers of Canada has published a revised version of the Raised by a Canadian Farmer On-Farm Food Safety Program manual. This represents the first major update to the OFFSP manual since 2014.

"In 2021 Chicken Farmers of Canada released a new food safety program that provides more flexibility for cleaning and disinfection routines on the farm. This video explains the new options and also talks about the importance of downtime and waterline cleaning and what to do when health issues do come up."
Last edited: Jul 17, 2022