Brain scans reveal why it is so difficult to recover from OCD and hint at ways forward
by Annemieke Apergis-Schoute
The Conversation
March 7, 2017

We often refer to people who are extremely neat or organised as “a bit OCD”. But the reality of living with obsessive compulsive disorder is a very different and serious matter.

People with the brain disorder struggle greatly with recurrent, intrusive thoughts (obsessions) and unwanted urges to repeat safety-seeking behaviours over and over again (compulsions). Common examples are exaggerated fears of contamination or causing injury – leading to excessive washing or checking. It is easy to see why that causes extreme distress and interferes with everyday life.

In some cases, people with OCD are tormented with agonising taboo thoughts, for example the fear that they will sexually abuse a child even though they have no desire whatsoever to do so. This is coupled with the compulsion to seek reassurance, for example by avoiding children or checking newspapers in case they have been accused. Such people are often too ashamed to disclose their symptoms, worrying about being punished or judged to be “insane”. When listening to such patients it is clear their torment is real, with day after day spent enduring irrational fears and repeating seemingly purposeless behaviours.

A standard treatment for OCD involves exposure and response prevention (ERP). This involves the patient confronting their worst fears while learning to not perform their compulsions. For example, it may include touching a toilet seat and not being allowed to wash your hands. This treatment is often combined with comparatively high doses of selective serotonin re-uptake inhibitor (SSRI) drugs – typically three times higher than that needed to treat depression. Together this can help many patients with OCD, but far from all. So why is OCD such a debilitating disorder and why can it be so hard to treat? Our new research offers a clue – and some hope for those struggling.

Naomi Fineberg, who leads a specialist clinic for patients with OCD, sees many for whom daily life is difficult and who continue to struggle with their disorder despite treatment. According to her, about 40% of patients fail to respond to individually-tailored treatments. What’s more, many are left with residual troublesome symptoms such as continuing obsessive thoughts or relapse.

Such patients may still fall into depression and suicidal behaviour after treatment, becoming so overwhelmed by their obsessive compulsive behaviours that they end up neglecting their family, work, friends and health. OCD in its most severe form disrupts even the most basic self-care activities, such as eating or drinking – sometimes resulting in the need for long-term hospitalisation or residential care.

OCD on the brain
The new study from our team here at the University of Cambridge, published in the Proceedings of the National Academy of Sciences, is now beginning to show why this is. We compared 43 OCD patients with 35 healthy control participants in an experiment designed to investigate why patients with OCD struggle to learn that not performing their safety behaviours is in fact “safe”. We did this by examining their ability to flexibly adjust their reactions to changes in threat while inside an fMRI scanner, which measures brain activity by tracking changes in blood flow, at the Wolfson Brain Imaging Centre.

We showed the participants two angry faces, of which one was sometimes paired with a mild electric shock to the wrist, making it threatening. Recordings of tiny changes in sweat indicated when participants were expecting a shock. To test flexible updating of threat we also reversed the stimuli so that the “safe” face became the threatening one and vice versa. The experiment tests the individual’s ability to learn when a stimulus is safe and so not to expect a shock. By reversing the stimuli, we introduced ambiguity as both faces had by then been associated with the possibility of a shock. 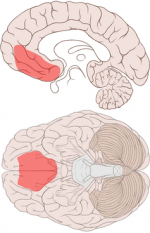 Patients with OCD could initially learn which face predicted threat. But once this had been reversed they were unable to differentiate between the new and the old threatening stimulus – they treated both as threatening. We think this is because they never really learned that one of the faces was truly safe – something which was reflected in their brain activity. Unlike in the healthy participants, there was no signal from the OCD patients’ ventromedial prefrontal cortex, a brain area that normally signals safety.

The results suggest that OCD patients are likely to have difficulty learning when situations are safe in everyday life – and that this has to do with differences in the brain. This has great relevance for the current psychological treatment of OCD, in which patients are expected to learn that not performing excessive and compulsive safety behaviours is in fact “safe” and therefore unnecessary. Current exposure therapies may only teach patients how to deal with their compulsions rather than truly learning that the situations they are so scared of are not actually dangerous. This means that obsessive thoughts can persist, and that it is possible for compulsive behaviour to return in future stressful situations.

The research follows another recent study published in Biological Psychiatry, which discovered a lack of communication between specific brain areas in patients with OCD. In particular, it found disrupted connectivity between neural pathways that connect the front of the brain with the basal ganglia, which are critical for flexible thinking and goal-directed behaviours that we know are impaired in OCD patients and are likely to contribute to the difficulty of overcoming the drive to perform needless compulsions.

An avenue for improving future treatment for OCD would be to explore better learning in patients that not performing compulsive safety behaviours is truly safe. This could be achieved by boosting rewards in therapy for not performing safety behaviour or possibly with the help of certain drugs that can enhance the positive experience of not having to perform the compulsions. 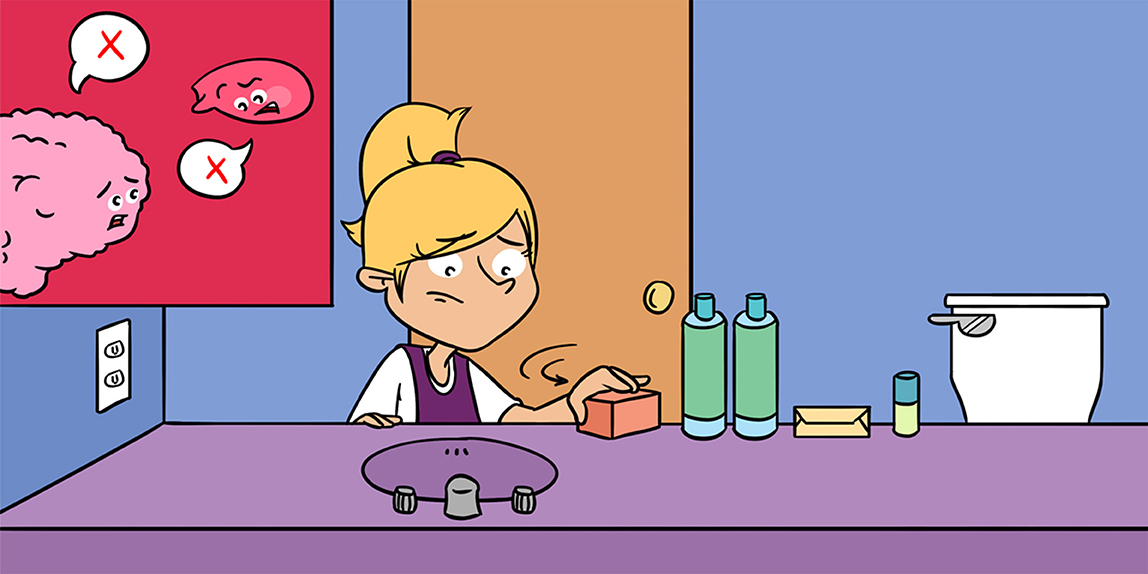 What Is Obsessive Compulsive Disorder?

Obsessive-compulsive disorder is a brain disorder characterized by unwanted and repetitive thoughts that cause intense worry (called obsessions) and/or by repetitive behaviors that patients perform to try to relieve the suffering caused by obsessions (called compulsions). Treatments exist and...

OCD is a brain disorder caused by multiple factors that are not completely known nor understood. In some cases, OCD is genetic (inherited through the mother’s or father’s genes), but in other cases it is related to certain infections (in rare situations, some children develop obsessive symptoms after a severe throat infection, for example), traumatic events (such as threatening situations, abuse, or bullying), and/or chronic stress [2]. We already know that OCD is not caused by anything that the patient or his/her parents did “wrong.”

In OCD, the communication system between parts of the brain, namely the orbitofrontal cortex and the basal ganglia, is disrupted and the brain makes mistakes when processing and prioritizing information.

The orbitofrontal cortex is responsible for using information from the senses to make decisions, and anticipating the result of our life choices. In OCD, this region is hyperactivated and detects errors and dangers where there is not anything wrong.

The basal ganglia controls movements and thinking, and acts as a control system that filters and stops anxious thoughts. In OCD, the basal ganglia fail to control the errors and dangers wrongly identified by the orbitofrontal cortex, which makes the patient overwhelmed by his or her thoughts and actions (Figure 1). 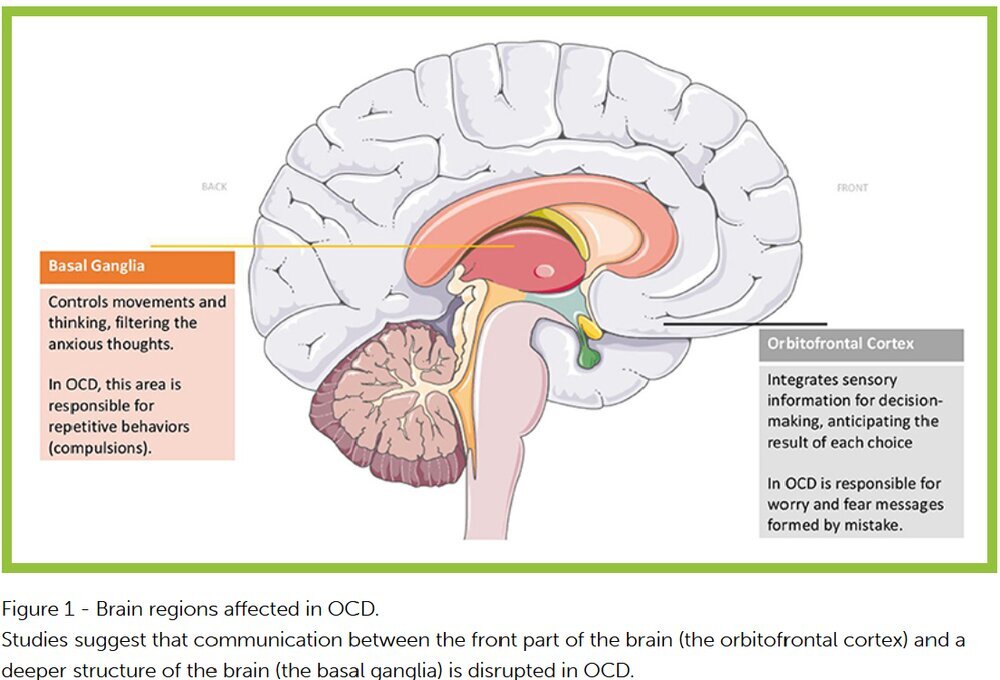 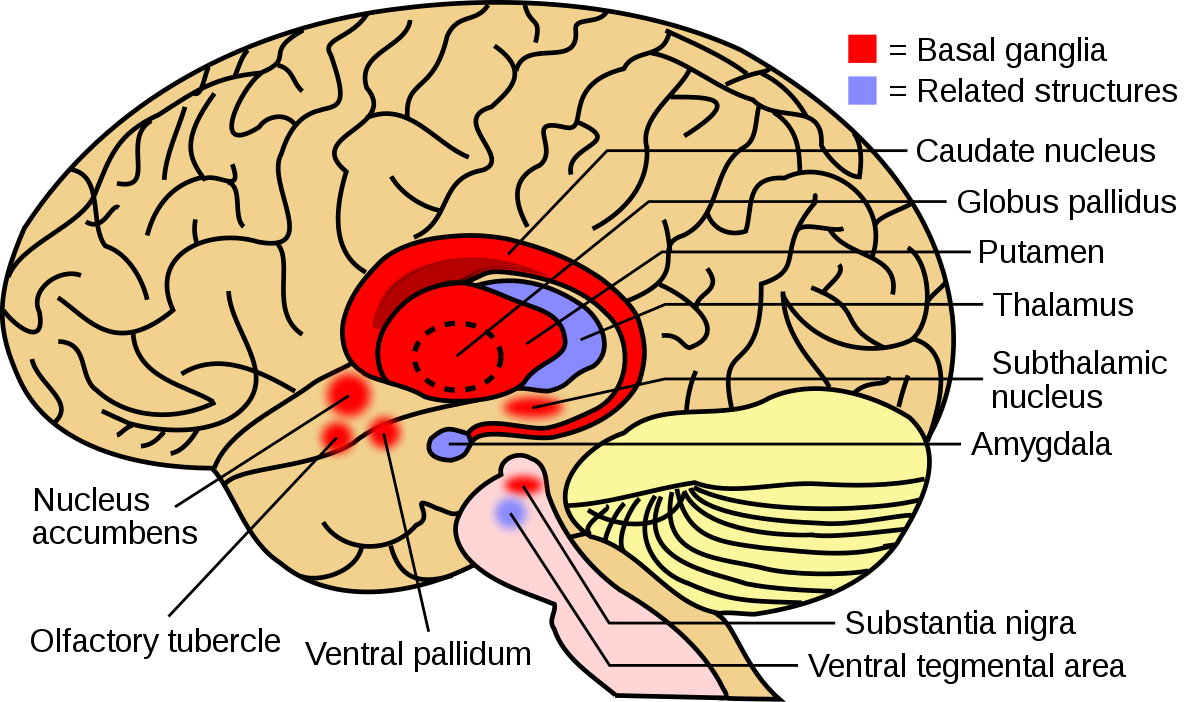 Though motor disorders are the most common associated with the basal ganglia, recent research shows that basal ganglia disorders can lead to other dysfunctions such as obsessive–compulsive disorder (OCD) and Tourette syndrome.

Since the realization that syndromes such as Tourette syndrome and OCD are caused by dysfunction of the non-motor loops of basal ganglia circuits, new treatments for these disorders, based on treatments originally designed to treat movement disorders are being developed.

The cortico-basal ganglia-thalamo-cortical loop (CBGTC loop) is a system of neural circuits in the brain. The loop involves connections between the cortex, the basal ganglia, the thalamus, and back to the cortex. It is of particular relevance to hyperkinetic and hypokinetic movement disorders, such as Parkinson's disease and Huntington's disease,[1] as well as to mental disorders of control, such as attention deficit hyperactivity disorder (ADHD),[2] obsessive–compulsive disorder (OCD),[3] and Tourette syndrome.[4] 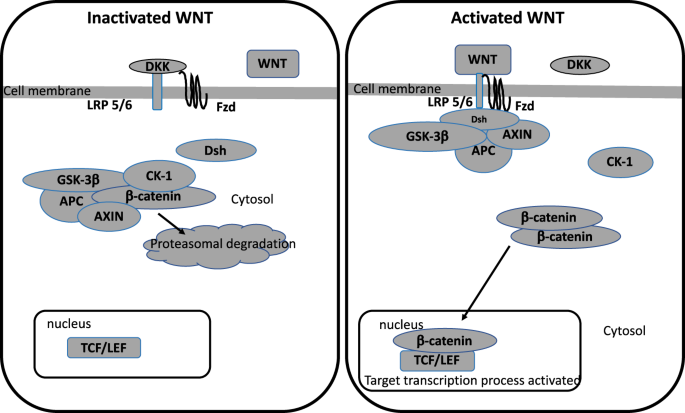 The role of inflammation in OCD has been strengthened by the higher rate of anti-basal ganglia antibodies (ABGA) in patients with primary OCD versus control subjects. Moreover, significantly increased levels of cytokines and inflammatory agents have been observed in OCD patients, such as IL-2/4/6/10 and TNF-α, compared to controls. In a recent study using positron emission tomography (PET) imagery, the presence of inflammation in the cortico-striatal-thalamo-cortical circuit was shown to induce microglial cell activation in OCD patients...

In low doses, lithium may appear to be interesting against OCD because of its potential inhibitory effect on oxidative stress, inflammation, and the glutamatergic pathway.
Last edited: Oct 1, 2021

A striking change OCD patients repeatedly describe following treatment with deep brain stimulation (DBS) of the ventral anterior limb of internal capsule (vALIC) is an immediate increase in self-confidence. We show how the DBS-induced changes in self-confidence reported by our patients can be understood neurocognitively in terms of active inference...

Furthermore, we have observed that when DBS stimulation parameters are set too high, the patient behaves more impulsively, a sign of excessive self-confidence...

Self-confidence is reduced in OCD. The person’s power to act in the world is severely diminished by their illness. OCD patients anticipate dangers such as contamination, and threats such as causing harm to others, or performing actions they find morally repugnant [6]. The reduced self-confidence our patients report is the result of their actions being driven by their anticipation of threat and danger. We suggest that DBS increases self-confidence by allowing the patient to again be open to other possibilities for action and not only those that relate to their fear and anxiety...

We hypothesise that people with OCD weigh the precision of their action policies, in part, based on their fearful and anxious mode of relating to the world. This has the consequence that their anxious anticipations are in the driving seat when it comes to selecting the action possibilities that drive their behaviour (Box 1). The effect of DBS is to restore the context-sensitive weighing of precision expectations. This allows the person to better anticipate what is relevant to them, and thus to once again be open to the many action possibilities of significance to them. It is the recovery of their readiness for and grip on the world that accounts for their increased self-confidence...

As long as precision is high for anxious anticipations, this will result in the person focusing only on the dominant affordance(s) relating to their anxious state of anticipation. When anxiety reduces, the person is once again open to dealing with the many other action possibilities the environment makes available. The result of this openness and readiness for the world is increased self-confidence.
Last edited: Thursday at 12:52 PM
You must log in or register to reply here.
Share:
Facebook Twitter Email Link