DBT: The Best Tool We Have for Self-Harming and Suicidal Teens

‘The Best Tool We Have’ for Self-Harming and Suicidal Teens​ 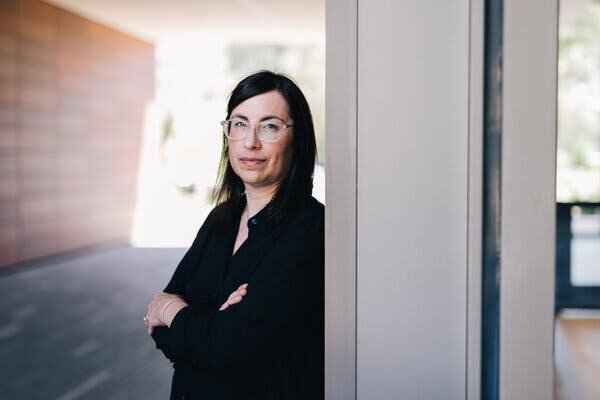 “There’s no medication for suicidal behavior,” said Michele Berk, a psychiatrist at Stanford University. “The patient needs to learn other behavioral skills that the medication does not teach you.” Credit: Anastasiia Sapon for The New York Times

This article examines the increase in anxiety, depression, self harm and suicide among U.S. adolescents. Parents and teenagers dealing with these issues can find resources here.

Each approach can benefit a particular subset of people. But for teenagers at acute risk for self-harm and suicide, health experts and researchers increasingly point to dialectical behavior therapy, or D.B.T., as an effective treatment.

“As of this moment, it’s probably the best tool we have,” said Michele Berk, a child and adolescent psychiatrist at Stanford University.

In a 2018 study in the Journal of the American Medical Association, Dr. Berk and her colleagues found that D.B.T. led to sharper drops in suicidal attempts and self-harm among adolescents than a more generalized therapy did. A 2014 study by researchers in Norway found a similar effect, noting that the therapy also has a relatively low dropout rate, and concluded that “it is indeed possible for adolescents to be engaged, retained, and treated” using D.B.T. The therapy is also identified as a key evidence-based treatment by the American Academy of Pediatrics. If anything, Dr. Berk said, D.B.T. “is not available enough.”

Dialectical behavior therapy is a subset of cognitive behavioral therapy, which aims to reframe a person’s thoughts and behavior. D.B.T. focuses initially on behavior and raw emotion, helping the individual surmount moments of crisis and understand what prompted the behavior in the first place.

D.B.T. is intensive. The fullest version of the program, which can take six months to a year to complete, has four components: individual therapy for the teenager; group therapy; training for teenagers and their parents to teach emotional regulation, and phone access to a therapist to help during a crisis.

The initial step is to teach a patient to recognize the feelings in the body when dangerous impulses arise, like “a lump in the throat, racing pulse, tense shoulders,” said Jill Rathus, a psychologist practicing in Long Island. In the 1990s, Dr. Rathus was part of a team that adapted the adult version of D.B.T. for use by adolescents and their families.

Patients then learn to put those feelings into words. It is vital, Dr. Rathus said, to “put language” to a physical and emotional experience; this engages parts of the brain, like the prefrontal cortex, that help regulate emotions. In young people, these brain regions are not fully developed and can easily become overwhelmed.

The next step is to learn to lower the arousal state with specific, often simple techniques: splashing the face with cold water, doing brief but intense exercise, putting an ice pack on the eyes — to “tip the body chemistry,” in the language of D.B.T. 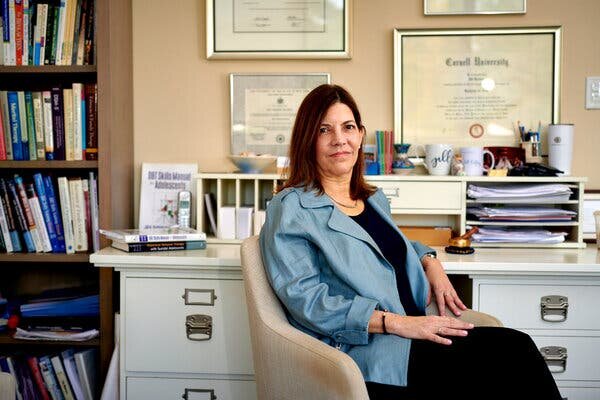 Jill Rathus, a psychologist in Great Neck, N.Y. “The mistake parents make, even well-meaning and loving parents, is to minimize the feelings,” she said. Credit: Gabby Jones for The New York Times

The intensive nature of D.B.T. reflects the difficulty of the challenge it confronts: regulating the emotions of teenagers who are so overwhelmed that they struggle to reason. At that age, Dr. Rathus said, the adolescent brain is often not developed enough to process the flood of incoming news and social information.

“The brain just goes into overload, flooded with high emotional arousal,” Dr. Rathus said, “and you can’t learn anything new, can’t process incoming information and so suggestions of what to do or to try just bounce right off you.”

This is why teenagers appear to their parents to be unable to hear suggestions for curbing their dangerous impulses, no matter how well-intended or compassionate the delivery, Dr. Rathus noted. Some adolescents are unable to start D.B.T. without a medication, like an antidepressant or anti-anxiety drug, to calm the brain enough for treatment to take hold.

Medication is a source of tension among experts in adolescent mental health, who note that drugs can be too easily prescribed, or prescribed in combinations with unknown side effects. But they can be vital as one tool to stabilize an adolescent.

“The medication really helps take the edge off,” said Dr. Berk of Stanford. “But there’s no medication for suicidal behavior. The medication is for depression and anxiety, and the patient needs to learn other behavioral skills that the medication does not teach you.”


Not without a cost​

Therapists trained in dialectical behavior therapy can be expensive and hard to find, and are often booked solid.

Rates vary by state and provider, but clinicians said it is not uncommon for a single hour of individual counseling to cost $150 to $200 or more, with group therapy roughly half that cost. Over six months, treatment can cost as much as $10,000 for someone paying out of pocket. But the out-of-pocket expense can also vary widely depending on the type of insurance plan being used, and whether or not the treatment is covered by Medicaid, the state insurance plan.

Only two states — Minnesota and Missouri — provide broad support for D.B.T., according to Anthony DuBose, the head of training for Behavioral Tech, an organization that trains D.B.T. therapists. He cited another reason for the relative scarcity of D.B.T. counseling: Some therapists fear that the therapy is too intensive and might overtake their available time. “We need to convince mental health providers they can do this,” he said.

The up-front costs can be worth it in the long run: Several studies compiled by researchers at the University of Washington suggest that D.B.T. interventions, while initially costly, can reduce the need for expensive, repeated emergency room visits. According to the university’s Center for Behavioral Technology, D.B.T. is cost-effective, and “accumulating evidence indicates that D.B.T. reduces the cost of treatment.” 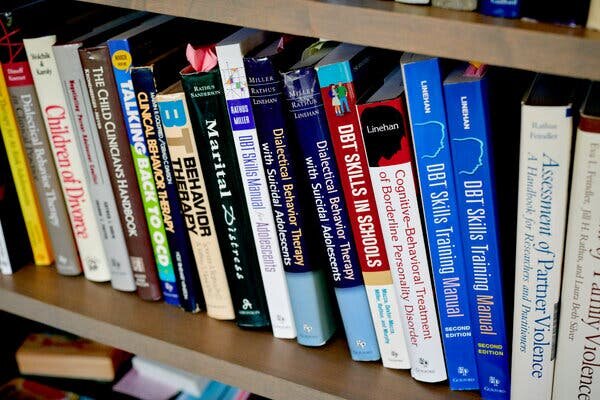 Slimmed-down versions of D.B.T. exist, and they may also work for adolescents experiencing self-harm and suicidal tendencies, experts said. But, these experts cautioned, many of these emerging variations have not been studied with the same rigor as the fuller treatment.

Anecdotally, adolescents who have had some D.B.T. or C.B.T. training appear better equipped to deal with distress and suicidal feelings, according to Dr. Stephanie Kennebeck, a pediatric emergency room doctor at Cincinnati Children’s Hospital who has researched therapeutic approaches to suicidal impulses.

Dr. Kennebeck said she had witnessed the value of the training firsthand in cases when adolescents arrived at the emergency room overcome by their intense emotions. Teenagers who had not had therapy and had no training to fall back on often needed to be kept at the emergency room longer, until they could be placed in a treatment program, Dr. Kennebeck said. She added that she felt more comfortable sending a child home if they had some sense of how to navigate difficult emotional situations.

“Those patients who have already had some C.B.T. or D.B.T. have the ability to name what their emotion is, tell me how their emotion can translate into what they’re going to do next,” Dr. Kennebeck said. “That is invaluable.”


Therapy for parents, too​

In D.B.T., the adolescent isn’t the only one learning. Parents are trained to validate the feelings of their teenagers, as irrational as those feelings may seem.

“The mistake parents make, even well-meaning and loving parents, is to minimize the feelings,” Dr. Rathus said. Telling a distraught adolescent “to just go for a walk, or focus on schoolwork, is like telling them to climb Everest.”

She said that the adolescent cannot hear the words, and they quickly “learn not to trust” strong feelings or emotions. Parents take group classes where they are guided to understand what teenagers are going through and taught specific ways to address the distress.

Valerie, an executive in Silicon Valley, described her family’s experience with D.B.T. (She asked that her last name not be used to protect their privacy.) Midway through 2021, Valerie’s 12-year-old daughter grew increasingly distraught; once a solid student, she began acting out in school, suffered seemingly uncontrollable meltdowns and became obsessed with her appearance and weight.

The girl started D.B.T., and Valerie took the parental instruction, which taught her more effective ways to respond to her daughter, she said — for instance, by first validating the girl’s painful feelings rather than immediately proposing a solution.

If her daughter is afraid to deal with a difficult subject or teacher in school, Valerie tries to reframe the fear: “I’ll say, ‘OK, you’re going to have this bad experience. So, beforehand, get some good sleep, have some good snacks, arrange to meet a friend after, bring a little fuzzy bear to class.’”

Valerie added: “It’s like filling up your gas tank before you go on a long trip.” She said the concepts were ones she had begun to adopt in her own life as she examined “worry thoughts,” such as, “Will I be lonely after I sell my business?”

She said that her daughter was improving. “It’s helped her get out of feeling hopeless or stuck in things,” Valerie said. “She’s catastrophizing things less” and “no longer going down rabbit holes she can’t get out of.”
You must log in or register to reply here.
Share:
Facebook Twitter Email Link