Eating breakfast won’t help you lose weight, but skipping it might not either

Eating breakfast won’t help you lose weight, but skipping it might not either
by Monique Tello, MD, MPH, Harvard Health Blog
April 19, 2019 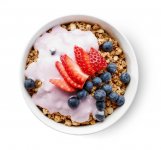 Yet another study has dispelled the popular “you have to eat breakfast” myth, and I’m thrilled. The breakfast cereal aisle is the most nutritionally horrifying area of the supermarket, crawling with sugary carbs in all shapes and flavors, all disguised as health food.

What does research tell us about eating breakfast?
A plethora of intermittent fasting studies suggest that extending the overnight fast is indeed associated with weight loss, but also more importantly, with improved metabolism. Overnight fasting of at least 16 hours (which really isn’t that extended) allows blood sugar and insulin levels to decrease, so that fat stores can be used for energy. This makes physiologic and logical sense: Our bodies can’t burn fat if we keep filling it with fuel. The idea that having a meal first thing in the morning revs up the metabolism isn’t based in reality.

So where did the “breakfast is good for you” myth come from? Wasn’t it based on research? Yes, but it was not the right kind of research. Observational studies produce interesting observations, and that is all. At the population level, people who regularly consume breakfast also tend to be a healthier weight. That doesn’t mean that breakfast has anything to do with it. It may be that people who regularly consume breakfast also tend to have daytime schedules (no night shifts), or higher socioeconomic status (can afford breakfast), or generally more consistent habits than those who don’t. These are all more important variables associated with healthier weight, and observational studies don’t reveal any of that.

What do the strongest studies say?
So how do you properly study the effect of eating breakfast (or not) on weight? You’d want to conduct a randomized controlled trial (RCT) evenly dividing participants into breakfast vs. no-breakfast groups, and then measure specific outcomes, like daily calorie intake and weight. RCTs are experiments where you can control for confounding variables, and thus feel more confident about drawing conclusions. (Having said that, RCTs can have other issues, and we’ll go into that.)

Researchers from Melbourne, Australia looked at a number of RCTs on breakfast and weight and/or total daily energy intake, and pooled the results. They found 13 studies in all that met their criteria: they had to define breakfast content and timing, and had to have been conducted in high-income countries (to be more comparable).

Are there flaws in these studies?
The authors do point out that the RCTs had flaws. Participants knew what experimental group they were in. The studies used various groups (college students, hospital staff, general public); featured different foods (crisped rice, wheat flakes, oatmeal); and had widely varying follow-up times. The RCT comparing a high-protein, high-fiber breakfast with nothing has yet to be conducted.

Still, in the end, the authors conclude: “While breakfast has been advocated as the most important meal of the day in the media since 1917, there is a paucity of evidence to support breakfast consumption as a strategy to achieve weight loss, including in adults with overweight or obesity.”

What’s the bottom line on eating breakfast?
Having said all this, if you love love love your breakfast, and you’re healthy, then enjoy! If you’re struggling with a metabolic medical problem, consider a breakfast of water, tea, or coffee and then have a healthy lunch. Or, at the very least, try not to eat close to bedtime. Whatever your preferred schedule, try to stretch out the time between meals, and give your body a chance to burn fat. Your metabolism will thank you!

And, of course, every body is different.

Re: Eating breakfast won't help you lose weight, but skipping it might not either

...There may also be a potential downside to intermittent fasting. A smaller percentage of participants were asked by the researchers to come on-site for more advanced testing, including changes in fat mass, lean mass, fasting glucose, fasting insulin and so on. Through those measurements, researchers discovered people who engaged in time-restricted eating seemed to lose more muscle mass than the control group. Weiss says the outcome wasn't definitive, but he is hoping to conduct further studies down the line.

There’s also a need for further studies to show whether intermittent fasting is safe for people over 60, or those with chronic ailments like diabetes and on medications.

Still, Weiss isn’t yet ready to write off intermittent fasting entirely -- there may be benefits around fasts during different times of day. Weiss’ study had participants skip food in the morning. He didn’t study the effects when it came to missing meals at night.

But for now, he won’t be recommending it to his patients.