Herbal Treatments for Psychiatric Illness: Their Prevalence and Efficacy

Surveys have suggested that 8%?10% of those suffering from an anxiety disorder seek relief in herbal supplements and treatments, and the number may be quite a bit higher, says Dr. Alexander Bystritsky, director of UCLA?s Anxiety Disorder Program. ?Herbal treatments for a variety of psychiatric treatments are seeing increasingly wide-spread use,? he says. Many factors have contributed to the surge in use of herbal treatments for psychiatric problems, including availability. ?These treatments are classified as dietary supplements,? he says, ?so they don?t have to pass FDA approval. They?re available over the counter at almost any health store, and they?re now easily acquired over the internet as well.? Herbal treatments can be effective, but patients who are also taking medication prescribed by a psychiatrist or primary care doctor often don?t apprise their doctor of their herbal treatment. ?Many patients use these treatments surreptitiously, either because they?re ashamed to tell their clinician, or because they just don?t think their clinician needs to know,? Dr. Bystritsky says. ?A large portion of the general populace mistakenly equates ?natural? and ?herbal? with ?safe.? Many of these supplements are safe, but they?re also psychoactive, and that makes the possibility of drug-drug interactions a real concern, especially when so many clinicians are blind to their patients? use of these supplements.? While herbal supplements aren?t patentable, and so don?t attract the same research dollars as pharmaceuticals, Dr. Bystritsky stresses the importance of their further study, not only to establish which supplements demonstrate efficacy under what circumstances, but to better protect patients from possible DDIs as well.

Common Herbal Psychiatric Treatments
While there are a veritable host of herbal supplements being used for psychiatric purposes, the most common in the American psychiatric population are St. John?s Wort (used for depression), passion flower (used as a sleep aid and to combat anxiety), valerian root (also used to aid in sleep and combat anxiety), SAM-e (used as a stimulant and antidepressant), and Omega 3 fatty acids (used as mood stabilizers). ?There is promising data suggesting that some of these supplements show efficacy,? Dr. Bystritsky says, ?but clinical results are scarce and sometimes mixed.? For example, a number of German studies have clearly demonstrated St. John?s Wort?s efficacy in treating depression, but no American studies have been able to replicate the results. However, American studies have demonstrated efficacy for omega-3 fatty acids in treating mild bipolar disorder. Open studies have also looked into valerian root?s uses as a sleeping agent and SAM-e?s value as a stimulant and antidepressant, but Dr. Bystritsky believes that much more effort needs to be put into testing herbal treatments. ?The effects, and the side effects, of these drugs need to be tested. They are readily available, hardly checked by the FDA, and more and more are being found and marketed.? Patient safety is a major issue, Dr. Bystritsky says, but better understanding these potentially useful supplements could also lead to discovery of new and effective methods of treating a variety of psychiatric illnesses. While he wouldn?t currently recommend any particular herbal treatment over its psychopharmaceutical counterpart, he believes there might well come a time when particular herbal treatments could be preferred treatment for specific presentations of psychiatric illnesses.

The NIH recognizes the importance of this issue, and has recently formed a new branch, the National Center for Complementary and Alternative Medicine (NCCAM) to promote and fund studies of herbal (and other) alternative treatments for a variety of diseases and disorders. http://nccam.nih.gov

Drug-Drug Interactions With Herbal Treatments
?Many herbal treatments are psychoactive,? Dr. Bystritsky says. ?Further, unlike manufactured pharmaceuticals, most of them have multiple modes of action. This coupled with the fact that many patients neglect to inform their psychiatrists that they are taking herbal treatments?and, conversely, many patients neglect to tell their homeopaths that they?re taking psychopharmaceuticals?produces real danger for DDIs.? For example, St. John?s Wort is actually a weak MAOI, and can interact with other serotenergic drugs. ?Imagine a treatment-refractory patient taking St. John?s Wort without telling their psychiatrist,? Dr. Bystritsky says. ?The psychiatrist might well keep upping the dose of an SSRI like fluoxetine, and if the patient is upping his or her own dose of St. John?s Wort as well, he or she could easily end up with serotenergic syndrome.? Dr. Bystritsky also warns that many herbal treatments have possibly treatment-complicating blood-thinning properties, and that elderly patients who take a lot of drugs should be particularly careful, as herbal treatments are likely to interfere with their properly metabolizing other drugs. Clinicians need to be aware which herbal treatments are popular in their patient community, and they need to be familiar with the methods of action and possible drug interactions of those treatments.

Conclusion
Dr. Bystritsky believes that herbal supplements might some day have a valuable place in clinicians? (particularly primary practitioners?) armamentariums. That will take more research, and it has been slow to come. For now, clinicians need to make themselves more familiar with herbal treatments, and need to determine whether their patients are taking them. ?Every patient should be asked whether they use herbal remedies,? Dr. Bystritsky says. ?There?s a one in ten chance any patient is using one, and a chance that if they are it could lead to a DDI.? Further exploration of the effects of these poorly understood, but promising, herbal treatments could reap great benefit for a wide range of patients with psychiatric illness. 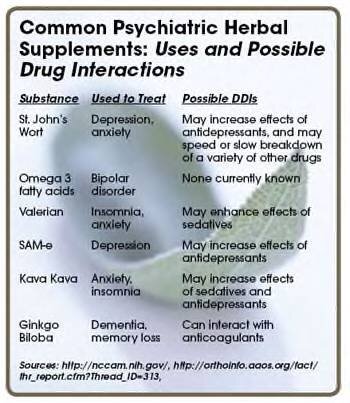