My OCD Diagnosis Was a Blessing, Until it Became Too Central to My Life

My OCD Diagnosis Was a Blessing, Until it Became Too Central to My Life​

Five years ago, seemingly out of nowhere, my brain fell into an abyss of unrelenting intrusive thoughts — What if I harm myself? What if I harm others? What if I’m crazy? — each of which was accompanied by electric shocks of anxiety and full-on sensations of dread. It was, by far, the most terrifying, vexing and isolating period of my life. My first moment of relief came four weeks later, when I finally got in to see a psychiatrist.

"You aren’t suicidally depressed or experiencing psychosis," he told me. "You’ve got a severe case of obsessive compulsive disorder."

At first, the label was helpful. I went from drowning in a bottomless and unexplainable sea of terror to "having OCD". The label helped me make sense of my reality, pointed the way to a specific type of treatment (something called "exposure and response prevention") and made me feel less alone. During those first few months, dealing with my OCD dominated my life, and for good reason.

But as time passed, identifying too closely with OCD began to impede upon my progress toward feeling like myself again. As I embraced the idea of myself as a person with OCD, it came to dominate my thinking, overshadowing other aspects of my identity. The majority of my writing was about OCD. I’d work out to help my OCD. I felt imposter syndrome in my work as a coach because of my OCD It affected my parenting, as I became worried my child would have OCD too.

In other words, my sense of self became entangled with the diagnosis. Around 18 months after my initial diagnosis, the last phase of my therapy involved largely disconnecting from the label, which had started to contract my life instead of enlarging it.

Emotional and mental health labels are having a moment. Terms such as "trauma", "anxiety", and "on the spectrum" are more and more common, as shown by striking increases in Google searches for those words in the last couple of decades. And it’s not just the labels: The World Health Organization has warned that "mental health conditions are increasing worldwide", and urges countries to invest more in mental health treatment. During the Covid pandemic, demand for therapy has surged in the United States.

Though it is difficult to know exactly what led to this cultural shift, I suspect it reflects declining stigma around mental health and mental illness, our innate desire to find belonging and community in an increasingly polarized society, and the fact that there is a lot that is genuinely broken about the world we inhabit.

The stigma around mental illness has certainly not disappeared. But increasingly, mental health diagnoses are being embraced as identity statements.

The broad concept of neurodiversity, for instance, frames autism as an example of diversity among brains, wrote Simon Baron-Cohen, director of the Autism Research Center at the University of Cambridge, in Scientific American in 2019. “The notion of neurodiversity is very compatible with the civil rights plea for minorities to be accorded dignity and acceptance, and not to be pathologized,” he explained, adding that “it challenges the default assumption that autism itself is a disease or disorder that needs to be eradicated, prevented, treated or cured.” It has even become routine for people to include mental and emotional health labels in their social media bios: dad, lawyer, Knicks fan, neurodivergent.

To the extent that this further reduces mental health stigma and helps people find the care they need, it is welcome news. If a label makes people feel less alone — or even joyful at having a name to put to their discomfort and a community to identify with, as the actress Rachel Bloom sings of in a musical number about her character getting a borderline personality disorder diagnosis, from the TV comedy, Crazy Ex-Girlfriend — then that, too, is positive.

But there are also some serious downsides to fixating on these labels.

First, there’s a flattening of people’s unique or individual experiences. Just about anything can — and often does — fall under large umbrella terms such as "trauma", as Parul Sehgal wrote recently in The New Yorker. When we apply a category too broadly, it loses much of its meaning.

"Labeling an individual with a diagnosis can allow them to better understand their situation and access the support services they need to function," said Emily Johnson, a physician in Colorado Springs who practices at a clinic for adults with cognitive disabilities. "On the other hand, labels can carry stigmas and be constraining, unnecessarily confining people to certain boxes." And, she added, "if we were to assign a label to all of those individuals, the label would cease to be useful."

I’ve also noticed that when mental and emotional health labels are used casually, we all too often end up romanticizing mental illness — which, as anyone who has actually experienced it knows, is anything but romantic. In a 2018 essay in The Times, Rhiannon Picton-James wrote about $48 gold necklaces that spelled out "anxiety" and "depression" in trendy italic letters. "The problem with the prettification of mental illness is just how out-of-kilter it is with reality," she wrote. And she’s right: A necklace that honestly represents these conditions would perhaps instead depict a black hole that sucks the life out of you and interferes with everything you want to be present for. Not so pretty.

I am grateful that OCD was named and well understood when I was first diagnosed. The research I did and the treatment I got helped me recover. OCD will always be a part of me, but today, it is much less central to how I define myself.

Five years ago, when people misused the term, describing themselves self-deprecatingly or humble-braggily as "OCD" for keeping their pantry well organized, for instance, it made me extremely angry. I felt that the term was mine, and I was personally offended. Now, however, it doesn’t bother me at all. Of course people misuse the term OCD; it is a widely misunderstood condition. When this happens now, I try to educate if appropriate, and then I get on with my day.

We need categories and labels. Without them, it’d be really hard to make sense of the world and ourselves. And also, the labels we use to describe ourselves are inherently reductionist. Both of these things can be true at once. As Walt Whitman wrote: "Do I contradict myself?/Very well then, I contradict myself./(I am large, I contain multitudes.)"

“It’s part of the human condition that we create stories about ourselves and about the world around us. Our stories are often filled with limitations, and we proceed to live our lives inside those limitations."

The Cruelest Obsession: Obsessing about Obsessing

The Cruelest Obsession: Obsessing about Obsessing By Jonathan Grayson, Ph.D. Obsessive Compulsive Foundation If you have OCD, you know the torture of constantly trying to avoid a potential disaster or feared consequence, whether it is harm to you or your family, going crazy, being evil, or...

In obsessing about obsessing, the wishing ritual involves you imagining how much better life would be if you didn’t obsess. Your marriage and your work performance would improve. You wouldn’t be so easily upset. You would enjoy life more and so on. These imagings may have some truth to them, but then again they may not. You may have unrecognized relationship difficulties that need attention above and beyond your obsessing. Maybe your boss is difficult and you wouldn’t be any more tolerant if your OCD was under control. Life would be better if your OCD was under control, but probably not as good as your fantasy.
Last edited: Jul 3, 2022

I like this concept of the wishing ritual since it applies to other OCD themes, not just OCD about OCD. The common wish is for certainty, regardless of the subject matter:

Every person with OCD wants to be 100% certain of something.
Click to expand...

With OCD about OCD, one may wish for certainty about the diagnosis, the prognosis, and the treatments. One way out is to re-focus on more general matters, such as the human condition.

In harm OCD and contamination OCD, there can be an unrealistic/unaccepting wish for no one to ever get hurt or be in pain, which only increases the sense of responsibility/morality. At times, one may simply wish for absolute certainty that the oven is off (or the A/C is on for the pets) or for the irrational feelings of guilt to go away.

In relationship OCD, the wish is often for certainty about one's partner and the relationship.

In existential OCD, a common wish is spiritual/religious ("big picture") certainty. Personally, I had a very religious upbringing, relatively free of existential dissonance.

In prison OCD (that's what I call it anyway), one may wish for certainty that one will never be imprisoned, or a world where no one who is innocent goes to prison or prisoners are treated better anyway.

Overfocusing/overwishing/ruminating about anything can be understood as having an overactive "default mode network." By Buddhist monk standards, most people are guilty of this:

"The default mode network of the brain...it's a connected series of brain regions that are active during most of our waking hours when we're doing that thing that human beings do all the time -- which is obsessing about ourselves, thinking about the past, thinking about the future, doing anything but being focused on what's happening right now."

The neuropsychology of self-reflection in psychiatric illness

The development of robust neuropsychological measures of social and affective function—which link critical dimensions of mental health to their underlying neural circuitry—could be a key step in achieving a more pathophysiologically-based ...

Although aberrant DMN activity and connectivity at rest have been reported across a variety of psychopathological conditions (Broyd et al., 2009; Whitfield-Gabrieli & Ford, 2012), here we will focus on DMN dysfunction in the aforementioned psychiatric illnesses associated with excessive or deficient self-reflection, respectively.
Click to expand... 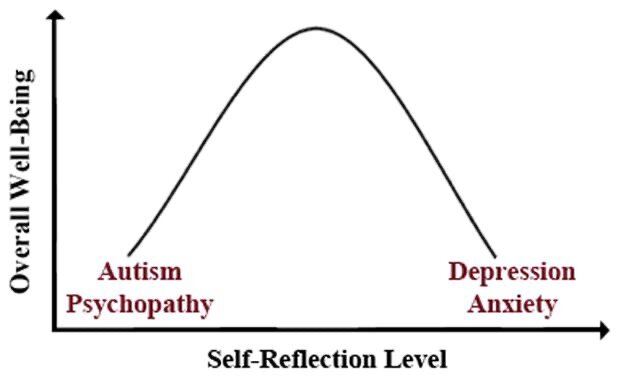