To the Bone: A new film about eating disorders 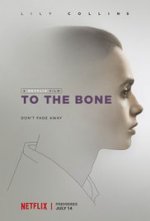 When Marti Noxon set out to make To the Bone, a film about a 20-year-old battling an eating disorder, she initially faced the question: Was the topic too niche?

The answer came in the form of a rousing premiere in January at the Sundance Film Festival, Netflix?s reported $8 million purchase of the film, a trailer that went viral with 54 million views in the first week and arguments over whether it glamorized excessive thinness. The film debuted on Netflix on Friday.

The film is loosely based on Ms. Noxon?s experience with an eating disorder. She and its star, Lily Collins, are among the 30 million Americans ? a third of them men ? who have struggled with one. Ms. Collins plays Ellen, an anorexia patient who enters her fifth eating disorder treatment center, an unorthodox group home run by a doctor played by Keanu Reeves.

Many of those reacting to the film?s trailer worried that watching it could trigger unhealthy thoughts in viewers who may be prone to eating disorders or already struggling with them. Indeed, some experts said that people who have had eating disorders should consider the state of their health before watching the film.

?If you don?t feel solid in your recovery, don?t watch it right now. It could be triggering at any part of your life if you aren?t feeling strong and solid in your recovery,? Dr. Dena Cabera, executive clinical director at Rosewood Centers for Eating Disorders said. ?It will always be there; you can look it up later.?

Others say the film may help spur action. Eating disorders have the highest mortality rate of any psychiatric disorder, and can affect individuals across every demographic.

?If the film helps raise awareness and more people seek treatment, that would be a success that we can be pleased with,? Dr. S. Bryn Austin, a professor at Boston Children?s Hospital and Harvard T.H. Chan School of Public Health, said. ?Eating disorders can be successfully treated, they just need to take the first step in reaching out for care.?

If you watch the film and recognize that a friend or family member exhibits some of the same behavior as the characters, Dr. Austin recommends approaching the discussion ?with care and love, not judgment,? and avoiding comments on weight or appearance. Professionals at eating disorder clinics around the United States recommend broaching the topic as soon as you identify concerning patterns.

?It?s painful for people to reflect on the past and see that they knew people were watching them and knew something was wrong but they were too scared to approach them,? said Bonnie Brennan, senior clinical director of adult services at Eating Recovery Center in Denver. ?I?d rather the person be mad at me for getting it wrong than to risk not saying anything and they have a life-threatening illness,? she said.

?I would caution parents: You need to watch this film with your child, get educated yourself and be aware that this is one story,? Dr. Cabera said, noting the diversity and complexity of different cases of eating disorders.

The New York Times asked readers to share their experiences with eating disorders. In less than 48 hours, we received more than 1,200 responses. Some described daily struggles, other celebrated full recoveries, and many spoke of their hopes of helping others by sharing their stories.

Here are some of their responses, edited and condensed. Some readers who submitted comments requested anonymity because of the sensitivity of the subject.

?She tried to explain how hard it was? ~ Anonymous, 42, Texas
As a parent, it was like being thrust back to the infancy stage in so many ways but with a heightened level of fear that you were failing at a parent?s primary responsibility ? to keep your child alive. All the research, therapy, family therapy, doctors? appointments, meal prep, and meal lessons (which was like having a second job) didn?t seem to matter. Because in the end, the difference between infancy and her being sick was one crucial factor ? her own agency ... she had to want to fight, too. Fight with all her will everyday, every hour, every moment for success to happen. It?s a bitter lesson as a parent.

Lisa Gorove, 56, Virginia
Ms. Gorove?s daughter, Caitlin Piper Gorove-Funk, died in 2016 after battling anorexia nervosa for 10 years. ?It?s an issue of an illness and a voice, it?s not a choice. That voice took a while to explain to other people, that Caitlin wasn?t doing this because she wanted to, it was that something had taken over. Her mind was consumed by the disease. She tried to explain how hard it was.?

?I held her and she died in my arms. I told her over and over and over again how much everybody loved her and that she could go. We did not have a funeral, we had a service that was beautiful on many levels. After her service, four people voluntarily went back to treatment.?

If parents recognize any behaviors portrayed in To the Bone, Ms. Gorove said: ?I would say immediately seek help. Don?t stop, don?t pass go, go to a doctor who knows eating disorders.?

A lot of people think eating disorders or addictions are a choice and they make that assumption and then blame the individual: ?Why don?t you go fix yourself?? It?s much more complicated than that, it?s a disease, and I hope that in five to 10 years from now people will look at mental injuries the same way they look at physical ones.

Shamma Pepper Fox, 16, New York
I am gay. I did not want my already awkward 14-year-old character to be mired by something as taboo and shameful as homosexuality. And, for all the crushes on girls I could muster up, I cannot control my sexuality.

But my weight, well, that is something easily manipulated.

Often people associate eating disorders with young women. But it is not unique to females, nor to queer males, like me. When not-talked-about and societally shamed, one cannot overcome such emotional struggles..

?I wanted to disperse into thin air? ~ Lucy Kelly, 21, New Zealand
After a summer of being sexually abused and a year of bullying and being isolated by my peers, compounded by years of depression and anxiety, I became fixated on this goal of being the thinnest. I wanted to be so thin that I turned into a little girl again ... I wanted to be so thin I would disappear. Before I could begin to comprehend what was happening, it had grown like a disease I was completely powerless to control or stop.

Shannon Wills, 23, San Diego
My eating disorder began when I was 13 years old, and was not managed until I was 19. It began with anorexia, and I worked my way through various other eating disorders through high school. It sucked all of the joy out of my life ? all of the personality out of my body ... But the minute my eating disorder developed, my voice was gone. That?s it, that?s what they really do; eating disorders steal your voice, steal the space that you occupy. I learned that I was not allowed to take up space, and that the best parts of me were the areas that I did not fill.

Lauren Lopez, 27, Brooklyn, N.Y.
My eating disorder started at 16, I?m now 27. It was an endless, exhausting pursuit to disappear. I wanted to disperse into thin air ... I eventually spoke less, felt less, physically became less. Almost like a child.

?Minimal public awareness? ~ Anonymous, 61, Michigan
I knew I was in trouble, although I was not willing to talk about it. And, even though my parents were concerned enough to take me to two doctors, it went undiagnosed. I began to binge and purge, my way of trying not to starve to death, but not willing or able to get back into healthy eating patterns. What I remember is an intense and overwhelming compulsive mental state, akin to addiction as I would imagine it.

This was in the 1970s and it was not recognized as readily as it would be now.

Misha, 25, Bayreuth, Germany
My experience with the disorder was confusing, among other things. I grew up in India at a time when there was minimal public awareness or discourse about eating disorders and the myriad ways in which they ravage a person?s body and mind ... People around me started discovering my secret years before I got better, but there was no socially acceptable way to get me professional help, so they didn?t try.

?Recovery is not a matter of willpower? ~ Kathy T, 36, Los Angeles
Eating disorders are far from glamorous. You don?t walk into a hospital and have Keanu Reeves waiting to console you. You feel like crap, smell like vomit, hide secrets, lose friends, lose hair, lose muscle mass, suffer from severe isolation and basically become a shell of your once happy, hungry self.

Recovering both physically and emotionally from my eating disorder took me many years. The worst thing I did was spend years ignoring it and not talking about it, when I could?ve been reaching out for professional help and personal support. Like many people with eating disorders, I never thought I could recover completely, but I am proud to say that it is possible, and I am proof of that.

Laura, 24, Florida
I want people to know that recovery is not a matter of willpower. And it certainly is not a matter of hearing an impassioned speech from a motivated therapist. As media consumers, we yearn for the redemption narrative ? the ravaged girl who is jolted out of her self-destruction by the right words delivered with enough passion. But the reality is that eating disorders are a complex web that cannot be swept away in one fell swoop.

Sondra Storm, 33, Oregon
U.S. culture is so messed up around weight and food that recovery from an eating disorder requires almost superhuman resilience. Diet and weight loss are discussed constantly, foods are categorized into ?good? or ?bad.? Employers increasingly have wellness programs that promote this kind of discussion at work. I am frequently complimented on my body and on what I eat by others. The compliments are always about how ?healthy? I am. I am not healthy, I am underweight and have an eating disorder.
You must log in or register to reply here.
Share:
Facebook Twitter Email Link