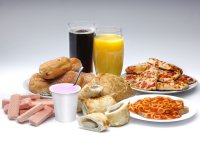 Certain foods may trigger inflammation in the body that can increase a person's risk for colon cancer, suggests a study published online Jan. 18, 2018, by JAMA Oncology.

Researchers followed the diets of more than 121,000 people (46,800 of whom were men) for 26 years. Participants recorded what they ate, and their diets were scored based on the amount of foods consumed that are linked to inflammation, such as red and processed meats, sugary beverages, and refined grains.

People whose diets were the most "pro-inflammatory" had a 44% greater risk of developing colon cancer compared with those who had low-inflammation diets, which often included high amounts of dark green leafy vegetables and whole grains. Even after adjusting for other cancer-causing factors, like high body mass index and less physical activity, the risk for developing colon cancer was still significantly elevated among those who had a pro-inflammatory diet.
Hakuna Matata — no worries, no trouble, take it easy

Doctors are learning that one of the best ways to reduce inflammation lies not in the medicine cabinet, but in the refrigerator. By following an anti-inflammatory diet you can fight off inflammation for good.

What does an anti-inflammatory diet do? Your immune system becomes activated when your body recognizes anything that is foreign—such as an invading microbe, plant pollen, or chemical. This often triggers a process called inflammation. Intermittent bouts of inflammation directed at truly threatening invaders protect your health.

However, sometimes inflammation persists, day in and day out, even when you are not threatened by a foreign invader. That's when inflammation can become your enemy. Many major diseases that plague us—including cancer, heart disease, diabetes, arthritis, depression, and Alzheimer's—have been linked to chronic inflammation.

One of the most powerful tools to combat inflammation comes not from the pharmacy, but from the grocery store. "Many experimental studies have shown that components of foods or beverages may have anti-inflammatory effects," says Dr. Frank Hu, professor of nutrition and epidemiology in the Department of Nutrition at the Harvard School of Public Health.

Choose the right anti-inflammatory foods, and you may be able to reduce your risk of illness. Consistently pick the wrong ones, and you could accelerate the inflammatory disease process.

The health risks of inflammatory foods
Not surprisingly, the same foods on an inflammation diet are generally considered bad for our health, including sodas and refined carbohydrates, as well as red meat and processed meats.

"Some of the foods that have been associated with an increased risk for chronic diseases such as type 2 diabetes and heart disease are also associated with excess inflammation," Dr. Hu says. "It's not surprising, since inflammation is an important underlying mechanism for the development of these diseases."

Unhealthy foods also contribute to weight gain, which is itself a risk factor for inflammation. Yet in several studies, even after researchers took obesity into account, the link between foods and inflammation remained, which suggests weight gain isn't the sole driver. "Some of the food components or ingredients may have independent effects on inflammation over and above increased caloric intake," Dr. Hu says.


Benefits of anti-inflammatory foods
On the flip side are beverages and foods that reduce inflammation, and with it, chronic disease, says Dr. Hu. He notes in particular fruits and vegetables such as blueberries, apples, and leafy greens that are high in natural antioxidants and polyphenols—protective compounds found in plants.

Studies have also associated nuts with reduced markers of inflammation and a lower risk of cardiovascular disease and diabetes. Coffee, which contains polyphenols and other anti-inflammatory compounds, may protect against inflammation, as well.

Anti-inflammatory diet
To reduce levels of inflammation, aim for an overall healthy diet. If you're looking for an eating plan that closely follows the tenets of anti-inflammatory eating, consider the Mediterranean diet, which is high in fruits, vegetables, nuts, whole grains, fish, and healthy oils.

In addition to lowering inflammation, a more natural, less processed diet can have noticeable effects on your physical and emotional health. "A healthy diet is beneficial not only for reducing the risk of chronic diseases, but also for improving mood and overall quality of life," Dr. Hu says. 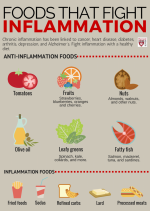 Hakuna Matata — no worries, no trouble, take it easy 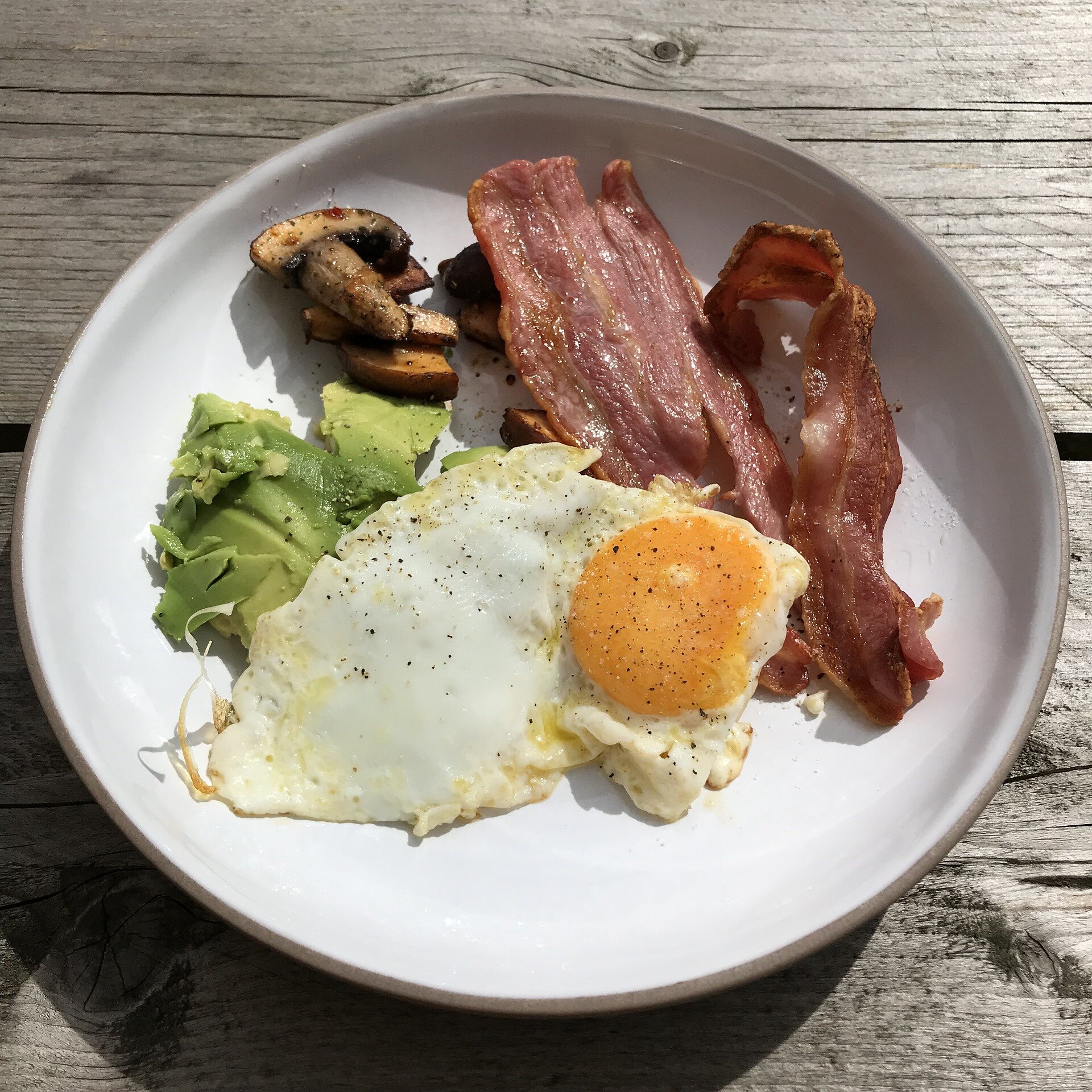 In the most comprehensive analysis yet of ketogenic (keto) diets, a review in Frontiers in Nutrition finds keto diets place pregnant women and kidney disease patients at risk of adverse health effects. The review, "Ketogenic Diets and Chronic Disease: Weighing the Benefits Against the Risks,"...

Restricting carbohydrate skews the diet toward cancer-causing foods. In fact, typical keto foods have been linked to an increased risk of heart disease, cancer, diabetes, and Alzheimer's—often the very diseases they are touted to help.
Last edited: Apr 14, 2022

Exactly. These fad diets including the Keto diets like Atkins are very dangerous yet still surprisingly popular — people relying too much on social media and advertisements to sell the products and not bothering to search for research studies about those products.
Hakuna Matata — no worries, no trouble, take it easy

How the Gut Talks (Rapidly! Insistently!) To the Brain

An astonishing array of brain functions demand a well-balanced microbiome. 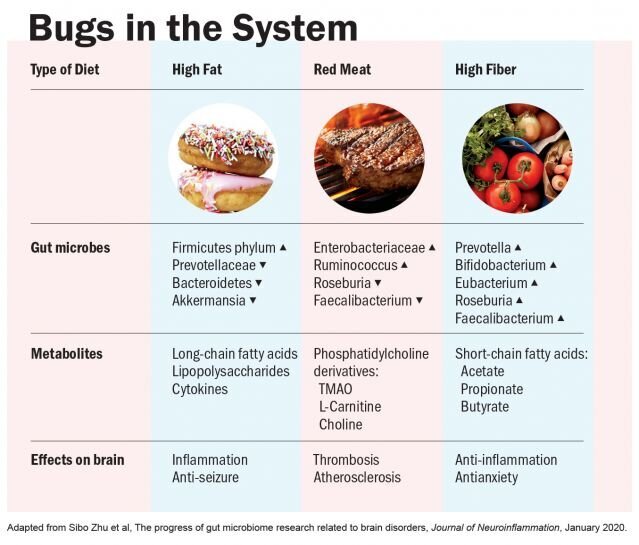 "Probiotics are most effective working in tandem with a plant-rich diet." 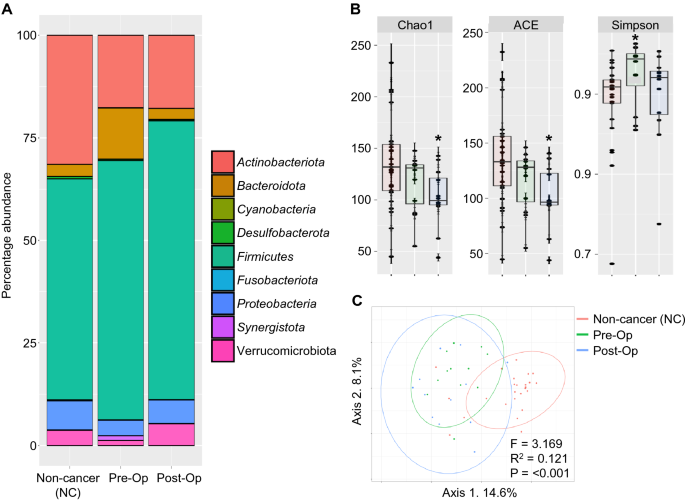 Alterations in co-abundant bacteriome in colorectal cancer and its persistence after surgery: a pilot study - Scientific Reports

There is growing interest in the role of gut microbiome in colorectal cancer (CRC), ranging from screening to disease recurrence. Our study aims to identify microbial markers characteristic of CRC and to examine if changes in bacteriome persist after surgery. Forty-nine fecal samples from 25...

There is growing interest in the role of gut microbiome in colorectal cancer (CRC), ranging from screening to disease recurrence. Our study aims to identify microbial markers characteristic of CRC and to examine if changes in bacteriome persist after surgery...

Microbiota associated with CRC progression such as Clostridium innocuum, Eubacterium brachy, Eggerthella spp. were also observed to be significantly abundant in post-operative CRC patients40,62,63. Further, we observed that curative surgery resulted in the reversion of some bacterial strains (i.e., Bacteroidetes spp.) to a “non-cancer” level but not others (i.e., Eubacterium coprostanoligenes group). On the other hand, certain bacterial groups which were found in equal abundance in NC patients were increased after surgery (i.e., A. muciniphila.). This illustrates a possible field-change in microbial composition in the colon of CRC patients, where there is persistence of oncogenic microbial species even after surgery.

One study looked at 249 patients with lung or kidney cancer, A. muciniphila was in 69% of patients that did respond compared with just a third of those who did not. Boosting levels of A. muciniphila in mice seemed to also boost their response to immunotherapy.

Strategies to promote abundance of Akkermansia muciniphila, an emerging probiotics in the gut, evidence from dietary intervention studies

Akkermansia muciniphila is a mucin-degrading bacterium commonly found in human gut. A. muciniphila has been inversely associated with obesity, diabetes, inflammation, and metabolic disorders. Due to its highly promising probiotic activities against obesity ...

Collectively, the increasing body of evidence from animal and human studies suggest that A. muciniphila is a highly promising probiotic, especially its potential for the prevention and treatment of diabetes, obesity, and their associated metabolic disorders, which is of great interest for future research and development...

Available evidence from animal studies showed that viable A. muciniphila or prebiotics (FOS) was able to consistently promote A. muciniphila abundance in the gut, suggesting a great potential for future development of dietary intervention approaches using viable bacterium or FOS for increasing gut A. muciniphila. Supplementation of B. animalis could also increase A. muciniphila by producing SCFA and facilitating mucin growth to feed the bacterium.

Metformin and antibiotics treatment (vancomycin) also significantly promote A. muciniphila abundance in the gut but these strategies are not suitable for general public. Rhubarb extract is promising but more research is needed to confirm its activity and another concern about Rhubarb is that it is not a typical dietary ingredient.

It should also be noted that to maintain A. muciniphila abundance in the gut one may want to avoid high-fat diet and heavy alcohol consumption, though the results were based on the measurement of relative abundance of gut microbials.
Last edited: Jul 11, 2022 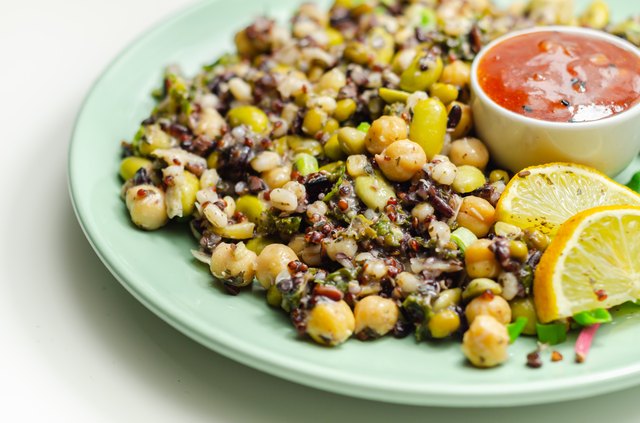 These Are the Best Carbs for Gut Health, According to Dietitians | Livestrong.com

There are many foods that benefit the gut. Find out which carbs for gut health are recommended most by dietitians to improve your digestion and overall health.

Potatoes are often dismissed as a healthy food option because they are high in starchy carbs, but in reality, they're full of important nutrients — especially when it comes to gut health.

Digestive health dietitian Jenna Volpe RD, LD, is a big fan of potatoes for gut health. Not only are they inexpensive, easy to digest and versatile in cooking, but "they contain resistant starch, which is a special type of prebiotic that helps feed lactobacillus and other probiotic microbes in the gut."

The results of this review suggest that the collective evidence supports plant-enriched diets vs KD [keto diet] for the reduction of cancer risk and the improvement of metabolic disorders in survivors. Additional prospective randomized clinical trials are needed to encourage use of dietary modification across the cancer continuum.