OT overload driving many nurses from the job

Charting the OT overload driving many nurses from the job​

As Canada's hospitals strain, data shows rise in overtime predates pandemic, but it has gotten worse since​ 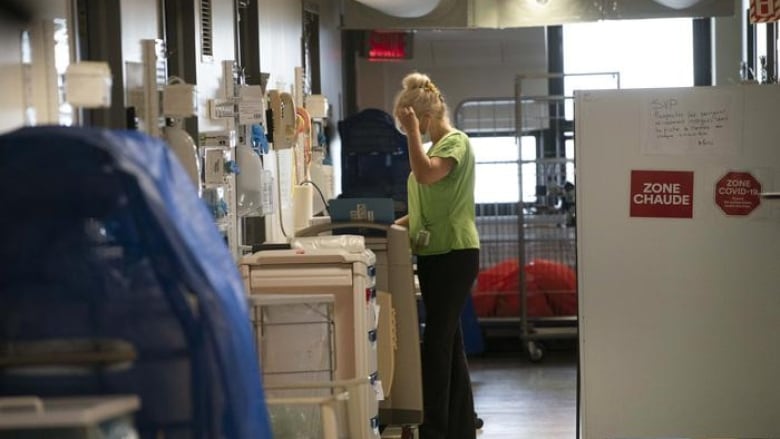 A nurse is seen working at a Montreal hospital last year. Data from Statistics Canada shows the increase in overtime among nurses started before the pandemic. (Ivanoh Demers/Radio-Canada)

After months without a break, Linda Boutillier, an emergency room nurse in Dartmouth, N.S., took a much-needed vacation earlier this summer.

But she received a call nearly every day to come back to help out. Soon after returning, she worked an 19-hour shift.
Boutillier had been on the schedule for 13 hours, but given the lack of staff, stayed on for another six.

"I feel guilty when I can't do it — because I know my team and I know the burden the patients are suffering," she said.
"I love my coworkers and I also care about my community. So when I can't be here, it makes me feel like I'm letting the system down and I'm letting my colleagues down."

Nova Scotia, in particular, saw one of the biggest increases in the proportion of nurses who did overtime during the pandemic, according to data from Statistics Canada compiled by CBC News.

As emergency rooms in some parts of Canada reduce their hours due to staffing shortages, and analysts warn the system is buckling under the strain, representatives for nurses say the signs of trouble were evident prior to the pandemic.

Linda Silas, president of the Canadian Federation of Nurses (CFN), said the reliance on overtime to fill staff shortages has had a detrimental effect on the profession. She said the lack of work/life balance drives many from full-time positions. "It's a vicious circle, but we have to stop it," she said. "We've been talking about the working condition, the poor working conditions of nurses for 10, 15 years."

Along with Nova Scotia, the amount of overtime required has been especially high in New Brunswick, Saskatchewan and British Columbia, the data shows, when compared to the national average.

September 2021 appears to have been an especially challenging month for Nova Scotia's health system, with 47 per cent of its nurses working extra hours that month, marking the highest reliance on OT of any province in any month throughout the pandemic.

Further data indicates those nurses who do work overtime are clocking more hours. In July, the average nurse doing overtime worked nine extra hours, the highest that figure has been since the first months of the pandemic.

A shortage of staff has resulted in closures of emergency rooms in parts of the country, including Ontario and Quebec.
Silas said a lack of nurses was apparent prior to the pandemic and now the need is even more acute.
Already, in 2019, a third of registered nurses – who make up the majority of the nursing workforce – were over 50, with many close to retirement, according to the CFN.

A recent survey of the federation's members found 94 per cent of respondents were experiencing burnout. Younger nurses said they were more likely to leave the profession.

Silas said many are tempted to leave full-time posts to work for agencies where they have a better schedule and pay.
"What we need to do is to fix the workplace," she said. "We have to make sure there's flexibility that they can get a day off and that we have a safe nurse-patient ratio."

While OT work among all health-care workers sharply increased after March 2020, the rate has since plateaued among non-nursing healthcare workers. The proportion of nurses clocking extra hours, however, continues to climb.

"It's important to recognize that we have a problem and we need to fix it right away," said Sylvain Brousseau, head of the Canadian Nurses Association.

Brousseau is also a professor at the Université du Québec en Outaouais and researches the working conditions of nurses. He said the increased overtime is a symptom of a problem in the system — OT is now built into the managing structure at many hospitals. "When you don't fix the problem, people are leaving the healthcare system," he said.

Boutillier, for her part, wants to see the nurses still on the job rewarded, with better pay and time off when they request it. "It's the work-life balance that we don't have. And that's not being respected," she said. "I feel like lately we're just a cog in a wheel, filling a flooded system."

For over two years, nurses and health-care providers have shouldered the enormous burden of the pandemic. Excessive workloads, chronic burnout and understaffing have pushed nurses and health-care workers past the breaking point. They are retiring early, switching to part-time employment or leaving their jobs or their profession altogether.

To help address Canada’s health workforce crisis and nursing shortages to deliver better outcomes for patients, CNA recommends that all levels of government work collaboratively to