Science Daily ? The ?default mode,? or baseline condition when the brain is idling, is not properly coordinated in patients with schizophrenia and this aberrant activity may be caused by poor connectivity between brain networks, a Yale School of Medicine researcher reports.

Co-author Godfrey Pearlson, M.D., professor of psychiatry, said he and his colleagues found that regions of the brain known previously to be individually abnormal in patients with schizophrenia, also function abnormally in concert in the default mode network.

?In addition, the extent of the default mode abnormalities correlated with the severity of auditory hallucinations, delusional thoughts, and attention deficits that are hallmarks of schizophrenia,? Pearlson said.

Although the exact role of the default network is unknown, it is thought to involve response to stimuli as well as self-referential and reflective activity that includes memory retrieval, inner speech, mental images, emotions, and planning of future events. 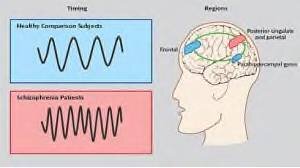 Although in normal comparison subjects, the network, as measured by its blood flow with fMRI, resonates slowly and regularly, in schizophrenia the activity is increased and more irregular and also correlates with positive symptoms. (Credit: Image courtesy of Yale University)​
Schizophrenia is a psychotic disorder that alters patients? perception, thought processes, and behavior as evidenced by hallucinations, delusions, disorganized speech or behavior, social withdrawal, and varied cognitive deficits. Episodic memory and attention are significantly impaired in schizophrenia.

The study included 21 patients with schizophrenia and 22 healthy subjects. The group performed a straightforward task while undergoing functional magnetic resonance imaging in which they were asked to detect an infrequent target sound within a series of standard and novel sounds. In the healthy subjects, the default mode network resonated slowly and regularly as observed by blood flow. In the patients with schizophrenia, the activity in the brain increased and was significantly more irregular, although they performed equally well on the task.

The study was supported by, among other funders, the National Institutes of Health in a MERIT grant to Pearlson.