Here is a template of what I suggested to management in which I have received more negative than positive responses:
EI
Employee Involvement
"This is the participation of employees discussing, brainstorming, and suggesting ideas for improvement, goal setting, and planning in order to help an organization fulfill its mission and meet its objectives. This involvement is based on the thinking that people involved in a process who know it best are more motivated to help themselves and the organization continuously improve."

"Corporations are for profit, use them like they use you."

Why many employees feel devalued even in booming job market
August 16, 2019

...For all the U.S. economy’s robust job growth, White and many people like him don’t feel much like beneficiaries of what is now the longest expansion on record. The kinds of jobs they once enjoyed — permanent positions, with stability, bonuses, pensions, benefits and opportunities to move up — are now rarer.

White’s evolution from employee to contractor is emblematic of a trend in the American workplace a full decade after the recession ended: The economy keeps growing. Unemployment is at a half-century low. Yet many people feel their jobs have been devalued by employers that increasingly assign a higher priority to shareholders and customers.

Economic research, government data and interviews with workers sketch a picture of lagging wages, eroding benefits and demands for employees to do more without more pay. The loyalty and security that many say they once felt from their employers have diminished, and with it some measure of their satisfaction.

Experts point to a sea change in the American job experience that began decades ago but has grown more visible across a wider spectrum of jobs. They see a confluence of forces squeezing workers — from globalization and workplace automation to a decline of labor unions, fiercer price competition and a growing use of outside firms and contractors...

In some cases, work is further outsourced to still other companies. Sometimes, workers are hired as contractors, who are technically self-employed yet often report to the same workplace as full-fledged employees.

An example is the hotel industry. Weil’s research found that many major brands have sold nearly all their real estate and shifted to a franchise system. The properties — now owned by private equity firms, investor groups and real estate investment trusts — pay a franchise fee to brands such as Hilton, Marriott and Hyatt.

They often then contract with a third-party management company to run the hotel. That company might hire staffing firms to provide housekeeping, maintenance and food service. In some cases, Weil said, it’s possible that not a single worker in a Hilton hotel is actually a Hilton employee, though they must adhere to Hilton’s standards.

“You might have 10 different employers, sometimes with overlapping authority, all in that building,” he said.

Uber and Instacart are other examples of the fissured workplace. So are universities that increasingly rely on adjunct professors and distribution centers that depend on independent contractors.

Some workers, Weil said, aren’t even aware that their employer isn’t actually the company where they report to work every day. They might realize it only when they lose their job or are injured at work and learn that they aren’t protected by the employment rules and safety protections that traditional workers are...

Scooby Doo suggests to the youth of America an alternative path for resistance against a greedy grown-up world, one achieved by outsmarting the enemy, rather than either fighting it or protesting it.
G 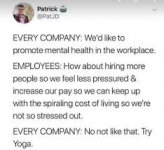 It’s a big company that turned huge profits, and executives decided to give every single employee an enormous bonus.

CNN reports Delta Air Lines is sharing $1.6 billion with its 90,000 employees. Each one will receive a check for 16.6 percent of their annual salary, which adds up to about two-months’ pay.

“Delta would be nothing without our 90,000 people,” CEO Ed Bastian commented on LinkedIn.

And it’s not the first time Delta has forked over a piece of the profits to its workers.

The Atlanta Journal-Constitution reports this is actually the sixth year in a row – but Delta is not alone.

According to CNN, a 2018 University of Chicago study found that 38 percent of American workers said their company shared profits with its employees.

The average amount, however, worked out to about 5 percent of their annual pay.

More Americans die every two weeks from drugs, alcohol and suicide -- "deaths of despair" -- than died in 18 years of war in Afghanistan and Iraq...

Important new research finds that 20 million Americans, particularly those with low levels of education, describe all 30 of the last 30 days as "bad mental health days."

...It is these working-class Americans, white and black alike, who have seen earnings collapse, family structure disintegrate and mortality climb. These Americans are earning less on average, adjusted for inflation, than their counterparts back in the 1970s.

"Our story of deaths of despair is essentially a long-run account of destruction of the working class," Deaton said.

No other industrial country treats its working class so badly. And there’s one big reason for that.

Among the three dozen industrial countries in the Organization for Economic Cooperation and Development, the United States has the lowest minimum wage as a percentage of the median wage — just 34 percent of the typical wage, compared with 62 percent in France and 54 percent in Britain. It also has the second-highest percentage of low-wage workers among that group, exceeded only by Latvia.

All this means the United States suffers from what I call “anti-worker exceptionalism.”

Academics debate why American workers are in many ways worse off than their counterparts elsewhere, but there is overriding agreement on one reason: Labor unions are weaker in the United States than in other industrial nations. Just one in 16 private-sector American workers is in a union, largely because corporations are so adept and aggressive at beating back unionization. In no other industrial nation do corporations fight so hard to keep out unions.

The consequences are enormous, not only for wages and income inequality, but also for our politics and policymaking and for the many Americans who are mistreated at work.

...In some respects, the pandemic is an equalizer: It can afflict princes and paupers alike, and no one who hopes to stay healthy is exempt from the strictures of social distancing. But the American response to the virus is laying bare class divides that are often camouflaged — in access to health care, child care, education, living space, even internet bandwidth...

Across the country, there is a creeping consciousness that despite talk of national unity, not everyone is equal in times of emergency.

“This is a white-collar quarantine,” said Howard Barbanel, a Miami-based entrepreneur who owns a wine company. “Average working people are bagging and delivering goods, driving trucks, working for local government.”

...A kind of pandemic caste system is rapidly developing: the rich holed up in vacation properties; the middle class marooned at home with restless children; the working class on the front lines of the economy, stretched to the limit by the demands of work and parenting, if there is even work to be had...

“Pre-existing social vulnerabilities only get worse following a disaster, and this is such a perfect example of that.”

...Health organizations have said that people over 70 are at drastically greater risk of dying from the coronavirus.

But the research on chronic health conditions suggests that the threshold may be as low as age 55 for people of lower socioeconomic status...

When inequality is high, the cost of living tends to rise, forcing more lower-income families to live paycheck to paycheck. At the same time, the decline of labor unions and the rise of part-time work means that low-income workers have fewer protections.

As a result, crises like coronavirus can deepen the gap between the haves and have-nots...

When a health crisis hits entire segments of society, it can set off a cycle in which declining economic status leads to rising rates of chronic illness. That, in turn, further depresses productivity and raises health care costs, leading to more poverty, which leads to more disease.

According to a 2010 study by a British biological sciences journal, Proceedings of the Royal Society B, whole communities can become caught in a “disease-driven poverty trap” in which “the combined causal effects of health on poverty and poverty on health implies a positive feedback system.”

...Research conducted during an influenza outbreak in New Haven, Conn., found that the rate of infection nearly doubled in census areas where a high proportion of residents live below the poverty line.

Because diseases do not respect the barriers that separate rich from poor, health inequality is a problem for everyone. A study from Delhi, India, one of the world’s most economically polarized cities, found that its slums served as citywide accelerants for an influenza outbreak.

“Public health isn’t just about your own personal health, it’s about the health of the public at large,” Dr. Errett said. “If there’s one person who can’t get treatment, that person is posing a risk to everyone.”

Book: Deaths of Despair and the Future of Capitalism

Arranged as a members-only union, the new organization won’t seek collective bargaining rights to negotiate a new contract with the company. Instead, the Alphabet Workers Union will only represent employees who voluntarily join, as reported by the New York Times. That structure will also allow it to represent all employees who seek to participate — including temps, vendors, and contractors (known internally as TVCs) who would be excluded by labor law from conventional collective bargaining.
You must log in or register to reply here.
Share:
Facebook Twitter Email Link