Sleep Situations and Your Growing Baby

Sleep Situations and Your Growing Baby
July 11, 2005
An article from BabyZone.com

Sleep! It's one of the most common issues concerning parents of young children. In addition to wanting to know how to get their child to be a better sleeper, moms and dads often have bedtime-related questions not always answered in articles addressing a child's sleeping patterns. Yet these questions are equally as important to a child's healthy development—and possibly a parent's peace of mind, too.
Read on for answers from trusted pediatricians on how to help your child sleep safely and, we hope, soundly!

How do I know how much sleep my child needs at different ages?
Like many human behaviors, sleep needs vary widely among individuals, and babies are no exception," says Dr. Karen Sadler, a pediatrician in the Boston area and Associate Instructor of Pediatrics and Boston University School of Medicine. "A newborn sleeps, on average, 16 hours per day, but this can range from 11 to 23 hours per day! Brand new babies have no day/night distinction, and the length of their sleep is limited by their hunger, requiring them to eat every 3 to 4 hours at max."

By age three to four months, most babies can manage a six- to eight-hour stretch at night, especially if they have reached a weight of 13 pounds; but, as Dr. Sadler explains, this pattern may not be stable. "Weeks after nice eight-hour nights, illness, teething, or the hunger of a growth spurt can disrupt a sleep pattern."
"At four to seven months, babies can sleep a solid eight-hour night, with two daytime naps of one to three hours," says Dr. Sadler, adding that by eight to twelve months, a ten- to twelve-hour sleep at night with one to two naps is the norm.

When can my baby sleep without a hat or without being swaddled?
"I don't recommend that babies sleep with hats at home unless they are small for gestational age, premature, or are struggling with weight gain," Dr. Jacobson says in response to the first part of this common question.

So what about swaddling? "Swaddling means different things to different people. In general, babies should wear one more layer of clothing than their parents. If, by swaddling, you mean wrapping tight, then think of swaddling as a comfort measure for the newborn and young infant. Parents should abandon it, when it no longer comforts the infant." Dr. Jacobson also suggests that in the first few weeks of life with a full-term child, parents might swaddle the baby below his or her arms, leaving the arms and hands free.

I know babies are supposed to sleep on their backs, but mine keeps turning over on his tummy. What should I do?
"I feel particularly passionate about this topic," says Dr. Eve R. Colson, M.D., Assistant Professor of Pediatrics at Yale University School of Medicine, and director of the Well Newborn Nursery at Yale-New Haven Hospital. "We recommend that all healthy newborns be placed on the back to sleep." She also suggests only putting babies to sleep in a safe environment and on a firm mattress, with no stuffed animals, heavy blankets, or pillows. "At about five months of age, the baby may learn to roll over," Dr. Colson adds. At this point, parents no longer have to flip their baby onto his or her back in the middle of the night. However, SIDS precautions should still be taken.

How do I know when to take the bumper pad and mobile off a crib?
Bumper pads are used during infancy as a cushion against the hard surfaces of a crib, but they can also be a safety hazard. "Parents should be sure that the pad is secured to the crib with at least six straps and that the straps are tied tightly. When a baby learns to pull to a standing position, pads and any other objects that can be used as a step to climb out should be removed," says Dr. Sadler.

She adds that a mobile should be securely attached to the side of the crib and hung high enough so that it remains out of a baby's reach. "It should be taken down when a child is five months old or learns to sit."

When can my child sleep with a blanket?
"The best sleep environment is consistent, quiet, dark, and has a steady, slightly cool temperature," says Dr. Sadler. "Blankets are not bad, per se, but can easily contribute to an overly constricted, over-bundled child. If a child is comfortable and warm enough in sleepwear alone, consider not using a blanket."

Dr. Sadler says if parents do choose to use a blanket for their sleeping child, the fabric should be thin, tucked into the mattress at the foot of the crib, and should come up only to a baby's chest. It should never cover a baby's head.

When can my child sleep with a stuffed animal or doll?
Perhaps your little one received the softest, sweetest teddy bear from her grandparents when she was born—you want her to enjoy it, but is it safe to put in the crib with her?

"Objects that are soft and fluffy—pillows, some blankets, stuffed animals, and toys—are not recommended for the young infant under about six months," cautions Dr. Sadler, explaining that if a child wedges his face into these items during sleep, it contributes to his risk of SIDS (Sudden Infant Death Syndrome). "The peak age for SIDS is between four and sixteen weeks."

"After eight months or so and into the toddler years, children can experience separation anxiety as their parents leave them to go to sleep. In this situation a toy or stuffed animal, as long as it is safe, can be the transitional object that a child uses to soothe himself in the absence of his parents," says Dr. Sadler.

How do I know when my child is ready to go to sleep without a bedtime bottle or nursing?
"There are two separate issues in this question," says Dr. Sadler. "The first is the need for food before sleep. Most infants 'fill up' before sleep, which enables them to maximize their night sleep stretch. A small pre-bed snack is appropriate right through the toddler years as part of a bedtime routine."

Using a feed to get to sleep is a separate issue, says Dr. Sadler. "After three to four months of age, when a child can usually sleep a six- to eight-hour night, it becomes important not to inadvertently teach a child to rely on a bottle or the breast to fall asleep." She recommends that children be fed, then put in their cribs sleepy but still awake. "This way, when they awaken at night, they won't demand a feed to transition back to sleep which disrupts the night for parents."

Is there a certain age when my child will stop needing a nap?
Just as all children are different, they vary widely in when they drop their daytime sleeping. "Some active one-year-olds are already not napping (or substituting quick 'cat naps' instead) while some five-year-olds are still sleeping after their morning kindergarten," says Dr. Sadler. "If provided a consistently structured day, however, most children are pretty good about getting the sleep they need. For the child who truly needs the sleep and isn't getting it, behavioral clues are crankiness, low energy or lack of focus."

When is it safe to turn off the baby monitor?
The short answer is when you are comfortable with turning off the monitor, says Dr. Sadler, reminding us that millions of the world's children are being raised without a monitor and are doing just fine.

Is the monitor being used for a newborn at night? "A typical infant monitor won't sound an alarm with lack of breathing, so it's really being used to tell parents when an infant is stirring," says Dr. Sadler. "Once parents can hear and identify cries without the monitor (which of course depends on the lustiness of the cry and the distance to the parents!), it's no longer useful."

"If the monitor is being used to bridge a distance—Mom is out gardening while her toddler sleeps in his crib, for example—it continues to be useful throughout the preschool years."
Hakuna Matata — no worries, no trouble, take it easy

David Baxter said:
I know babies are supposed to sleep on their backs, but mine keeps turning over on his tummy. What should I do?
"I feel particularly passionate about this topic," says Dr. Eve R. Colson, M.D., Assistant Professor of Pediatrics at Yale University School of Medicine, and director of the Well Newborn Nursery at Yale-New Haven Hospital. "We recommend that all healthy newborns be placed on the back to sleep." She also suggests only putting babies to sleep in a safe environment and on a firm mattress, with no stuffed animals, heavy blankets, or pillows. "At about five months of age, the baby may learn to roll over," Dr. Colson adds. At this point, parents no longer have to flip their baby onto his or her back in the middle of the night. However, SIDS precautions should still be taken.
Click to expand...

Learn how to safely put a baby to sleep and which products to avoid.

The U.S. Food and Drug Administration is reminding parents and caregivers not to put babies in sleep positioners. These products—sometimes also called “nests” or “anti-roll” products—can cause suffocation (a struggle to breathe) that can lead to death...

To reduce the risk of sleep-related infant deaths, including accidental suffocation and Sudden Infant Death Syndrome (SIDS), the American Academy of Pediatrics recommends that infants sleep on their backs, positioned on a firm, empty surface. This surface should not contain soft objects, toys, pillows, or loose bedding. 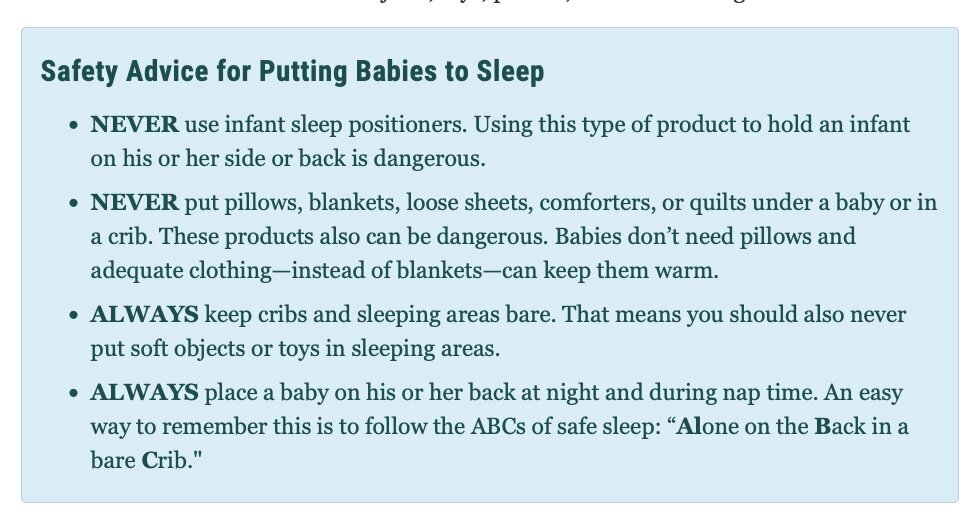 Last edited: Jul 28, 2022
Replying is not possible. This forum is only available as an archive.

The Bad Things That Happen When You Don't Get Enough Sleep