The Cycle of Pain: Transmuting Anger into Empathy

Understanding the Cycle of Pain: How to Transmute Anger into Empathy
by Joshua Kauffman, Tiny Buddha
June 4, 2018

“When we get angry, we suffer. If you really understand that, you also will be able to understand that when the other person is angry, it means that she is suffering. When someone insults you or behaves violently towards you, you have to be intelligent enough to see that the person suffers from his own violence and anger. But we tend to forget … When we see that our suffering and anger are no different from their suffering and anger, we will behave more compassionately.” ~ Thich Nhat Hanh

There is so much to be angry about every day because life is unfair.

My own situation right now is infuriating. I left my job and my home country in large part to return back to the US and help my mom care for my father. During that time, my mother’s frustration with her role as caregiver, along with the emotional stresses and practical limitations it placed on her, often boiled over into rage directed at me. This situation persisted for ten months.

Immediately after that, she herself became terminally ill, and now my role is caregiver. My whole life plan has had to change as a result, so my hopes of going back to my old life now need to take a backseat to my mother’s illness, which was brought about by her own behavior (smoking). For so many years I had asked her to quit, to which she reacted - you guessed it - angrily.

When it was clear she wasn’t doing well, I encouraged her to see a doctor. She got angry with me.

While in the hospital, she was frustrated at being confined to a bed. She took her anger and frustration out on me for that too.

Now, faced with difficult treatments and limitations on her lifestyle, she lashes out at me every day or two. Me - the only one at home with her, and the only one of her four children who has the will and/or ability to care for her in this way.

I’m not going to lie - it’s difficult to refrain from reacting in kind, and sometimes I do just that.

In my cancer caregiver support group, I found this is a common thread - people are angry, and they have difficulty directing and dealing with that anger.

One woman has a husband whose blasé attitude toward his cancer puts him in a lot of dangerous situations. This completely stresses her out because she is in a constant state of worry about his health and safety. But, rather than expressing these sentiments, she has internalized them, allowing anger to slowly fester.

It was a significant and therapeutic step for her to actually admit that she was angry. Her way of coping thereafter was to withdraw from her husband in order to preserve her own emotional well-being.

Another woman was angry because her husband, sick on-and-off with cancer for nearly twenty years, was also depressed through his illness, leaving her as the sole caregiver and breadwinner. Needless to say, her marriage was far from the storybook version she’d originally had in mind. Her way of dealing with her anger was to be productive - to be the best mother and caretaker she could be—and occasionally vent or break down to some trusted friends or our group.

There is nothing wrong or shameful about either of these two approaches. Both women have shown incredible fortitude in the face of difficult situations. Furthermore, their reactions were certainly much more constructive and peace-promoting than simply popping off and reacting temperamentally.

However, I have found it helps take me to an even more peaceful state to remind myself of the cycle of pain.

In this cycle, as succinctly described by Thich Nhat Hanh above, people act out in negative ways (e.g., aggressive, uncaring, etc.) as a result of inner pain. Even if that pain is difficult for us as outsiders to understand, it is there as a matter of fact.

Though it may help to intellectually understand the specific causes and dynamics of the individual's pain, in most cases that isn’t possible because you cannot get inside someone else's head. But we can still accept that the other person is in pain. Once we accept this, we can relate it to our own and therefore feel empathy.

This is very difficult to do in the moment. What helps me when I feel the flush of temper is to take a deep breath and close my eyes. When I take in that breath, I imagine myself “breathing in” the other person’s pain, which appears to me internally as smoke or pollution.

I then imagine in my head what they are going through. That is why it helps to understand what the pain is. In my mother’s case, it’s the fear of her disease as well as the discomfort with suddenly having to deal with the restrictions it places on her time and activities.

I imagine them dealing with that pain, and as the breath comes in I feel a sensation permeate my body. I then let out the breath, which I imagine to be a vapor of peace. I feel lighter and calmer.

I call this alchemy for the soul - transmuting anger into empathy.

When I expressed this in the group, I was met with crickets, except for the woman who was angry about her husband’s careless attitude about his condition. She had two comebacks.

First, she said although that was a “nice” sentiment, she needed to take care of herself at this point and not worry about her husband’s emotions. After all, as the cancer sufferer, he was receiving all kinds of sympathy from every corner. Fair enough.

Secondly, she said that it takes a lot of energy and effort to “suppress” your feelings when you’re already feeling exhausted from being the caregiver. I understand that too.

At that point, I dropped the matter, firstly, because I sensed her slight agitation and secondly, because I thought it might strain the dynamics of our safe place if I came across as a preachy teacher in a group of equals.

What I wanted to say was that this is not about her husband’s feelings. In fact, quite the opposite - doing this would be all about her emotions.

To hold onto anger and need to direct it somewhere, to me, is draining. I need to carry it around and find where to put it. I need to put effort into not blowing up at someone. To me, this exercise of alchemy for the soul feels like the opposite of “suppression,” whose Latin origin literally means to “press down.”

When I perform my little alchemy ritual, the feeling is much more of a lightening up or dissolving kind of sensation. Rather than doing someone else a favor, I feel like I am treating myself well, which allows me to treat others well too (and not begrudge them for it!).

If you feel that this thinking lets the person off the hook too easily, remember that however hurtful someone’s actions are, no one can “make” you feel a certain way. Ultimately, how you react internally to someone’s actions, what you choose to focus on and how you think about it, is your own responsibility. To blame another person for how you feel is to give him or her power over you.

To be clear, I’m not making excuses for bad behavior. If someone does something cruel or thoughtless or aggressive to you, it is his or her failing for doing so. But however hurt you may feel in the moment, that person does not have the power to make you carry that hurt with you in the form of anger.

Once again, this has nothing to do with you being a saint and deigning to give that person compassion or forgiveness; it’s about you taking care of yourself by stopping the angry chain reaction that can lead to all kinds of hurt and unfortunate behaviors.

Why not just allow yourself to just be angry and make up a sad story about what was done to you in which you are cast as the victim? In a sense, you’re totally justified in doing so, but where does that lead? How does that help you? The truth is, you very well might have been a victim of someone’s aggression in that moment, but only you can make yourself remain a victim by carrying around the negativity.

When you help yourself by letting go of your anger, you help everyone else around you too.

This is a practice that has very much helped me, but it’s not the only way to deal with anger. I’m always in search of new strategies myself, so please feel free to tell me what’s helped you cope.

About Joshua Kauffman
Joshua Kauffman is a recovering over-achiever and workaholic. Leaving behind a high-powered life in business, he has become a world traveler, aspiring coach, and entrepreneur of pretty things. Amateur author of a recent memoir Footprints Through The Desert, he is trying to find ways to share his awakening experience, particularly to those lost in the rat race like he was.

OTOH, some people also use anger to habitually control others. I think it is ridiculous how much verbal abuse is allowed in the name of customer service.

I think this would help the nursing shortage in the US: 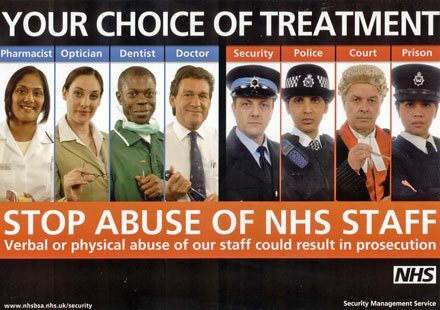 Burned out nurses who have left the profession have said they are so tired of dealing with the verbal abuse they would not work in nursing for any price.
You must log in or register to reply here.
Share:
Facebook Twitter Email Link