Body mass index has been around for years, but has limited usefulness, health experts say

Body mass index, or BMI, is the ratio of weight to height and has long been used as a way to classify people as 'underweight,' 'normal weight,' 'overweight,' or 'obese.' But experts say much more information about a person is needed to diagnose their risk of weight-related health problems, including diabetes or heart disease. (VGstockstudio / Shutterstock)

For years, patients walking into their family doctor's offices for checkups have seen the chart posted on the wall beside the scale. A calculation of their weight to height ratio cranks out a number known as body mass index, or BMI. That number classifies someone as "underweight," "normal weight," "overweight," or "obese."

Then come the assumptions about that person's health based on the number.

The simplicity of a single number is what makes BMI such an attractive measurement for health-care providers and policy-makers, said Dr. Arya Sharma, professor of medicine at the University of Alberta and the founder and scientific director of Obesity Canada, a network of obesity researchers and clinicians.

But it also makes BMI a flawed instrument to measure a person's health, he said.

"So it's easy to think about obesity in the same sense," he said. "But the problem is that obesity doesn't work that way."

Health experts, including Sharma, agree that in general, being overweight or obese is associated with an increased risk for many health problems, including Type 2 diabetes, cardiovascular disease, chronic back pain, some types of cancer and mood disorders. But there are many other factors that play a role, including genetics, ethnicity, diet and exercise — all of which need to be assessed individually.

The fact that someone is overweight doesn't mean a health-care provider can automatically assume they're not eating nutritiously or getting exercise — or that they suffer from weight-related issues such as high blood pressure or sleep apnea, Sharma said.

"The biggest myth in general is that you can step on a scale and decide whether you're healthy or not," he said. "Not everybody who's big, you know, is sick or has a health problem [and] not everybody who's skinny is healthy."

Since 2003, Health Canada's guidelines for body weight classification in adults have recommended using BMI and waist circumference "to assess the risk of developing health problems associated with being overweight or underweight in adults aged 18 years and over, with the exception of pregnant and lactating women," André Gagnon, a spokesperson for the Public Health Agency of Canada told CBC News in an email.

BMI "tends to be the preferred measure of excess body fat for population-level surveillance and epidemiologic studies because of its simplicity and the ease with which it can be estimated," Gagnon said.

But the Public Health Agency of Canada also "recognizes that BMI has known limitations," he added. "For example, BMI does not distinguish between fat mass and muscle (fat-free mass), and it fails to capture information on the distribution of body fat."

Where the fat is makes a difference
That fat distribution is key to determining how someone's health might be affected, Sharma said, noting that fat located directly under the skin — the kind "you can pinch using your fingers" — tends to be less harmful.

In addition, it's important to distinguish between using body mass index numbers to make general predictions about trends in weight-related diseases in a large population and using BMI to assess the health of an individual, Sharma said.

"It works nicely for population studies. It does not work in medical practice when I'm trying to, you know, come up with a treatment plan for someone, or even trying to figure out if somebody actually needs a treatment at all."

BMI 'not diagnostic'
Joanne Lewis, director of health-care provider education and engagement for Diabetes Canada, agrees that BMI is useful on a population level, but it's important to look at "the whole picture" when trying to prevent or treat diabetes on an individual level.

"BMI is one of many tools for assessing health status," Lewis, who is a registered dietitian, told CBC News. "[It's] just one marker."

When she was a practising dietitian treating clients with diabetes, she found measuring waist circumference to be a more useful tool than BMI, because of the riskier nature of fat in the abdomen versus overall weight. She also measured blood pressure and blood sugar.

Lewis says she didn't make lowering BMI a goal for her clients.

"I look more at things that people can absolutely control," she said, such as incorporating vegetables into more meals, walking a certain number of times per week, or reducing sitting time.

Although both Health Canada and the U.S. Centers for Disease Control and Prevention (CDC) list BMI as a healthy weight reference tool on their websites, they caution that BMI should not be used alone to assess health risk.

"BMI can be used as a screening tool, but is not diagnostic of the body fatness or health of an individual," the CDC website says.

"To determine if a high BMI is a health risk, a healthcare provider would need to perform further assessments. These assessments might include skinfold thickness measurements, evaluations of diet, physical activity, family history, and other appropriate health screenings."

For Sharma, that's the "bottom line on BMI."

"Use it as a screening tool," he said. If people are worried about their weight and want to check their risk of diabetes or heart disease, they should see a doctor to get the appropriate tests and go over the many factors affecting their health — all the information, experts agree, a BMI number can't provide.
Hakuna Matata — no worries, no trouble, take it easy

Administrator
Reminds me of the joke where a guy loses weight from being sick, and people tell him (while he is still sick) that he never looked better :facepalm: 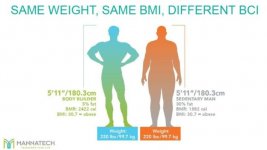 Administrator
I just realized the U.S. changed the guidelines in 1998:

One of the most vocal critics of the guidelines has been former surgeon general C. Everett Koop, who has questioned lowering the cutoff point for what is considered overweight. "We have so many overweight and obese people in this country and we are trying desperately to get them down to weights that will be more protective," said Koop, whose organization, Shape Up America!, issued its own weight guidelines in 1996. "This makes it more complicated. I worry that people will say, `This goes too far. I quit.' I think it is like someone being in a race and saying they moved the goal line."
Click to expand... 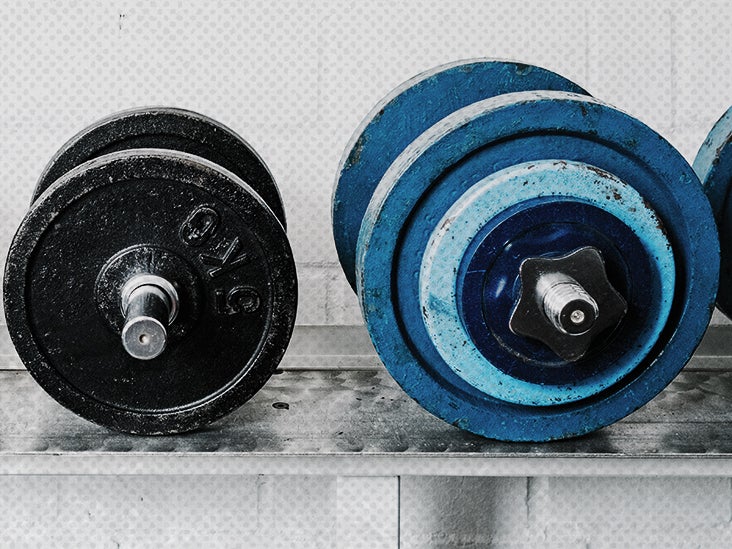 Obesity: Why exercising may be more important than dieting

New research suggests that improving fitness is at least as effective as weight loss for staving off obesity-related cardiovascular disease and mortality risks.

Improvements in cardiorespiratory fitness and physical activity tend to produce a larger reduction in mortality risk than weight loss. 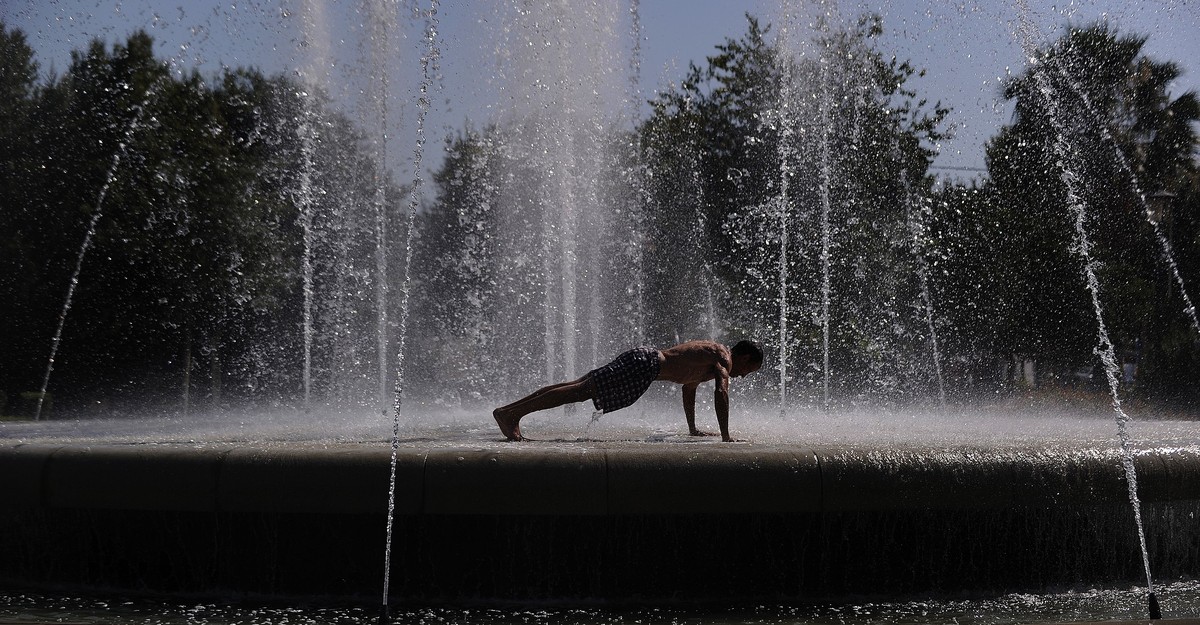 The Power of One Push-Up

In 2018, a study of half a million middle-aged people found that lung cancer, heart disease, and all-cause mortality were well predicted by the strength of a person’s grip.

Daniel said:
Reminds me of the joke where a guy loses weight from being sick, and people tell him (while he is still sick) that he never looked better 🤦
Click to expand...

Exactly. In February 2014, when I was first diagnosed with colon cancer, I lost 45 lbs. in 3 weeks due to the combination of cancer, surgery, and acquiring c.difficule in hospital. Definitely not a recommended strategy for losing weight.
Hakuna Matata — no worries, no trouble, take it easy

Administrator
My grandfather was "obese" but lived to 93, and he was still relatively active then. He kept his condo so clean, you would have thought he had his own housekeeper
Last edited: Dec 20, 2021

The Relentless Reality of Anti-Fatness in Fitness

And where we go from here.

It still took time for the idea of exercise-for-health to become a cultural norm...It was in the 1970s that fit, lean, and healthy—three distinct concepts—all merged into one. By then, Friedman explains, “it was taken to mean that those who exercised—or even those who looked like they exercised and were ‘fit’—were healthy,” while those who remained “soft,” whether or not they exercised, were deemed unwell. “That’s when things were off and running.”

...Current data indicate that the majority of deliberate weight-loss attempts don’t work long-term, and the weight-cycling that often occurs can create health risks. But there’s also a wealth of data demonstrating that exercise has a hugely positive impact on health and longevity—regardless of weight change.

Several studies, including a 2014 Progress in Cardiovascular Diseases meta-analysis specifically assessing fitness versus fatness, found that fit people in the obese and overweight categories had the same mortality risk as fit people who fell into the normal BMI range. That same analysis found that “unfit individuals had twice the risk of mortality regardless of BMI.” Thus, the researchers advised, physicians and public health officials should pivot their focus from weight loss to physical activity and fitness interventions.
Last edited: Jan 18, 2022
Replying is not possible. This forum is only available as an archive.

Still in the Top 5

Top web browsers 2018: Chrome, then everyone else