I?ve been thinking about panic attacks lately ? not because I?m having them. But because both of my daughters have been dealing with anxiety, so it?s been on my mind.

Mackenzie and Talee are in their twenties. Along with inheriting imbalanced serotonin (from me), they also have the millennial stressors of working, living on their own, and being financially independent.

Talee called me the other night and we got into a conversation about possible triggers for panic and what to do when we feel it coming on. I hadn?t thought about this for awhile, and it felt good to revisit it. To be mindful of what might cause my anxiety, and actions I can take to stop it.

It?s amazing to feel empowered. To know that I?m in control of my panic, instead of it controlling me.

I used to have panic attacks every time I went to the grocery store, the mall, and when I drove. Here?s a list of some triggers that Talee and I talked about: 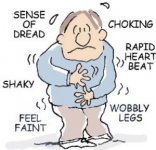 Talee and I discussed what to do if we feel panicky. We find it?s best to distract ourselves, instead of focusing on the panic attack. Here are some of our distraction ideas:


It?s hard to think rationally or logically during a panic attack. Actually, it?s impossible. That?s why it?s important to feel prepared, and accept and acknowledge our panic. We feel more in control because we?re aware of what may trigger our anxiety. We?re empowered because if we do have a panic attack, we know what works best to stop it.

My mom has such a problem and it's scary. I would really like her at least something to help, but so far all to no avail .... But we will soon have an appointment with one doctor who can help us !!!
You must log in or register to reply here.
Share:
Facebook Twitter Email Link