The word “intrusive” has a pathological connotation, but most thoughts are intrusive, that is, they come to the thinker unbidden. Very few thoughts are produced intentionally. Pointing this out to patients and not referring the obsessive thoughts as “intrusive” helps to normalize patients’ appraisals of their thoughts and of themselves.

This is one of my favorite metaphors for dealing with obsessions. I ask you to imagine that an obsession is a lonely character with no friends. Everyone is yelling at him to stop—and that's the only attention he can get.

"Whatever happens, I can cope." This statement reminds you of your own inner resources and gives you the determination to meet the challenges of life. (The concept comes from the Cognitive Behavioral Therapy tradition.)

Keep in mind the need to stubbornly refuse to quit. As the famous 18th century OCD and Tourette’s sufferer Samuel Johnson said, “Great works are performed not by strength, but perseverance.”

Administrator
Some people report that they have difficulty distinguishing between spikes [unwanted thoughts] and "legitimate important thoughts." A fool proof litmus test for telling the difference is to ask yourself did the thought or question come with an associated anxiety or feeling of guilt. Ultimately all such thoughts can be placed in the realm of OCD. When asked "What if it's not OCD," I say "Take the risk and live with the uncertainty."

Administrator
“If you surrender to uncertainty, nothing goes wrong.”

Administrator
"Our energy and the energy of the universe are always in flux, but we have little tolerance for this unpredictability, and we have little ability to see ourselves and the world as an exciting, fluid situation that is always fresh and new. How we relate to this dynamic flow of energy is important. We can learn to relax with it, recognizing it as our basic ground, as a natural part of life; or the feeling of uncertainty, of nothing to hold on to, can cause us to panic, and instantly a chain reaction begins. We panic, we get hooked, and then our habits take over and we think and speak and act in a very predictable way."

Administrator
“Gratitude is an emotion that grounds us and is a great way to balance out the negative mindset that uncertainty engenders.”

There should be more about about the less well-known symptoms of Obsessive-compulsive disorder, things such as

Everyone who has OCD has it in a different form, so they might not show all of these symptoms but for others it can be a defining part of their illness.

A recent Swedish population-based study showed unexpected results: a higher dose of SSRIs and longer treatment duration were correlated with a lower risk of metabolic or cardiovascular problems. This evidence can be explained in many ways, including better disease control, appropriate pharmacological treatment, and unhealthy habits (smoking, unhealthy diet). Full doses of SSRIs could prevent secondary depression; comorbidity can be as high as 80%, but most prevalence rates are around 25% and 50%, considering OCD. Moreover, better symptom control could reduce anxiety, which plays a key role in causing metabolic and cardiovascular alterations.

Both depression and OCD have an impact on glycemic control, which is exacerbated with high anxiety with consequent hyperglycemia via activation of autonomic responses and triggering the HPA axis. Hyperglycemia can also lead to anxiety in different ways. By increasing cortisol secretion, altering heart rate, and modifying skin conductance levels it can lead to stress-like arousal patterns pervasive in psychiatric patients.

Can diabetes cause anxiety? Blood sugar and other causes

The emotional challenges of living with diabetes can also trigger anxiety.

Researchers report that anxiety affects about 40% of people with diabetes. This prevalence is much higher than that in the general U.S. population, where the condition affects 18.1% of people.

People with diabetes are at risk of developing low blood sugar, or hypoglycemia. Some of the symptoms of hypoglycemia are identical to those of anxiety.
Last edited: Dec 17, 2020

Administrator
What to Do When Your Client Suffers from Intrusive Thoughts that Cause Anxiety, Shame, Embarrassment, or Depression | NewHarbinger.com

Change “what if” to “what is”: pivot your attention to what you hear, see, and smell right now in the moment.

Current exposure therapies may only teach patients how to deal with their compulsions rather than truly learning that the situations they are so scared of are not actually dangerous...

An avenue for improving future treatment for OCD would be to explore better learning in patients that not performing compulsive safety behaviours is truly safe. This could be achieved by boosting rewards in therapy for not performing safety behaviour or possibly with the help of certain drugs that can enhance the positive experience of not having to perform the compulsions. 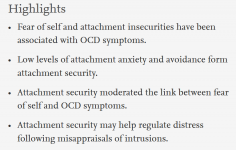 Our findings are consistent with theoretical writings implicating attachment insecurities in the development and maintenance of OCD symptoms (e.g., Doron & Kyrios, 2005; Doron, Sar-el et al., 2012; Guidano & Liotti, 1983). Attachment security and contextual activation of the sense of attachment security have been linked with cognitive and emotional flexibility, tolerance for uncertainties and ambiguities, and openness to inner pain (e.g., Cassidy, Shaver, Mikulincer, & Lavy, 2009; Mikulincer, 1997; Mikulincer, Shaver, & Rom, 2011). Our findings suggest that the cascade of mental events linking self-vulnerabilities with OCD is more likely to occur among insecurely attached people than among secure ones, and that dispositional attachment security may protect against the development of OCD-symptoms. The mobilization of mental representations of supportive others or actual sources of support may sustain optimistic beliefs and constructive strategies of distress regulation and maintain a stable sense of self-worth (Mikulincer & Shaver, 2016), thereby preventing the development of OCD.
Last edited: Dec 20, 2020


Feared possible selves in cognitive-behavioral theory: An analysis of its historical and empirical context, and introduction of a working model - ScienceDirect

While the Internet cannot take the place of face-to-face interaction, I do believe that social media sites have the potential to lessen the feelings of isolation that OCD sufferers feel. Connecting with others on forums, or even just reading about people who are suffering as they are, can help reduce loneliness, and in the best case scenario, prompt those with OCD to seek appropriate help.

From Latin obsessus, perfect passive participle of obsideō ("sit on or in, remain, besiege"), from ob ("before") + sedeō ("I sit"); see sit, session, etc.

Borrowed from French compulsif, formed from Latin compulsus, past participle of compellere (“to compel”), from com- (“together”) + pellere (“to drive”).

Administrator
OCD3: What is Suicidal OCD? - YouTube
Replying is not possible. This forum is only available as an archive.

My OCD Diagnosis Was a Blessing, Until it Became Too Central to My Life