Strong Evidence Against SSRI Warnings Continues to Roll In

Here at AADT, we've been speaking out against the FDA's SSRI blackbox warnings for quite a while, so one might think that we feel pretty good about all the new evidence coming to light that shows just how poor a decision those warnings were. However, waking this morning to find headlines splayed across virtually every major news source declaring: "Suicide Rises in Youth; Antidepressant Debate Looms," "Youth Suicides Increased as Antidepressant Use Fell," and "Teen Suicides Up Sharply for the First Time in Years," we feel nothing but anger and frustration for what might have been had the FDA not allowed emotions to sway its decision and instead listened to the overwhelming weight of research standing on the side of the suicide prevention applications of SSRI medications. This renewed interest on the part of the media may well undo much of the damage of the FDA's blackboxes, but the attention also serves to highlight the worthlessness of a body that refuses to revisit its own decision, even in the face of ever increasing proof of their own failures.

This week news outlets have caught wind of two large scale examinations of the effects of those warnings on the suicidality of the very populations that those warnings were meant to protect. Both of those studies came to the same conclusion; that which has been trumpeted in print and across the web: suicides are up. The American Journal of Psychiatry published the first of these reports in this month's edition. Examining suicide statistics alongside prescriptions statistics from both the U.S. and the Netherlands, a team concluded that in both countries increased rates of teen suicide were "associated with" increased regulation of SSRI medications.

Then today the CDC released detailed information regarding teen suicide that highlighted the fact that for the most recent stats available teen suicide had the largest single increase over the previous year. While the CDC doesn't go so far as to mention causes of this increase, others are more than willing to pick up that slack. Supporters of the blackbox warnings have already begun searching for excuses, and by and large, many of their points hold water. This data only represents a short period of time after the warnings were instituted, maybe this incredibly large jump is a mere statistical aberration. Maybe suicides rates will taper off or even begin to decline again soon. The question that we need to ask, is how much proof do we need before the public begins to demand that the FDA revisits their calamitous decisions?

What seems likely is that what we are seeing here is that the damage of the blackboxes has been done. Antidepressant prescriptions fell precipitously after the warnings were issued, and studies have found that treatment patterns in adults not covered by the warnings changed. Physicians and therapists, whether acting subconsciously or with full knowledge of their actions, hesitated before making a depression diagnosis and providing treatment. In some cases, it's possible that those hesitations or failures lead to suicide attempts. Of course, it's also possible that what we're seeing is a statistical aberration.

The very fact that the media has attracted so much attention to this story indicates real potential for change. If physicians are more aware of their decision making about SSRI's, and how FDA warnings might affect those decisions, then one would hope they would make the best decisions possible. The American Pediatric Association has already updated its stance on adolescent suicide to incorporate this new information, so we all should feel comfortable that information is moving down the appropriate pathways to the places were it can do the most good. Now if that information would only make its way into the collective minds of the regulatory bodies at the FDA, we might really start seeing some progress. 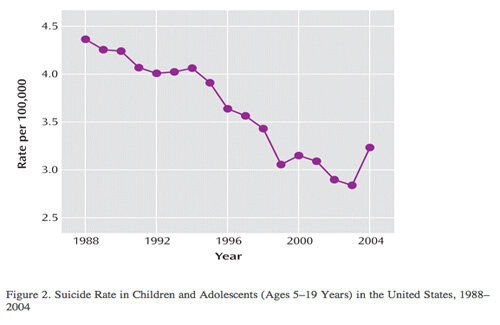