The 'Most Dangerous' Allied Spy of WWII Was a 'Limping Lady' With a Prosthetic Leg
A Mighty Girl Blog
April 6, 2020

The Nazis considered Virginia Hall the "most dangerous of all Allied spies," yet the story of the "Limping Lady" is largely unknown today. Hall spent nearly the entire war in France, first as a spy for Britain's newly formed Special Operations Executive (SOE) and later for the U.S. Office of Strategic Services (OSS) Special Operations Branch. Even her cumbersome wooden prosthetic leg, which she nicknamed Cuthbert, proved no obstacle to Hall's courage and determination to defeat the Nazis. While undercover in France, she proved exceptionally adept at eluding the Gestapo as she organized resistance groups, masterminded jailbreaks for captured agents, mapped drop zones, reported on German troop movements, set up safe houses, and rescued escaped POWs and downed Allied pilots. Even years after the war, however, she rarely talked about her extraordinary career; a reticence she likely developed during her years as a spy since, as she once observed, "Many of my friends were killed for talking too much."

Hall was born to a wealthy Baltimore, Maryland family in 1906 and, from an early age, she resisted the expectation that she would marry into privilege and settle into the role of wife and mother. Describing herself as "cantankerous and capricious," Hall set her sights on becoming a diplomat after studying in Paris and falling in love with France. Although she applied numerous times, woman accounted for only six of the 1,500 U.S. diplomats at the time and she was repeatedly rejected. Still hoping to join the Foreign Service, she ended up taking a clerical job at the U.S. Embassy in Warsaw, Poland. An accident during a hunting trip in Turkey, however, changed the course of her life after her left leg had to be amputated below the knee due to gangrene. Soon after, Hall learned that the loss the her leg disqualified her from the Foreign Service, ending her dreams of becoming a diplomat. Undaunted, she resigned from her clerk job and moved to Paris in 1939, just as war was breaking out across Europe. After German forces invaded France on May 10, 1940, Hall volunteered to drive ambulances for the French army during the six-week long Battle of France, transporting wounded soldiers from the front line under fire from German fighter planes. After the French surrender, Hall traveled to London to support the British war effort. On her journey, she impressed an undercover agent who put her in touch with a senior officer in the Special Operations Executive (SOE), Winston Churchill's new secret service. The new agency had never employed a female operative but, after six months of failing to infiltrate a single new agent into France, they decided to send Hall to France as the SOE's first female agent in the country.

She arrived in the Vichy region of France in August 1941 under the cover story of being a war correspondent for the New York Post newspaper. In Toulouse, she established a resistance network called HECKLER, which gathered information about German troop movements and helped downed British pilots escape to safety, then she traveled to Lyon, where she helped coordinate activities of the French Resistance. Hall was forced underground after America entered the war, but continued operating in France for another 14 months. She became adept at changing her appearance on a moment's notice, and was known by multiple aliases. "To a certain extent, was invisible," says Craig Gralley, author of Hall of Mirrors: Virginia Hall: America's Greatest Spy of World War II. "She was able to play on the chauvinism of the Gestapo at the time. None of the Germans early in the war necessarily thought that a woman was capable of being a spy."

Hall's extraordinary effectiveness amazed the SOE commanders and helped change their minds about women operating in combat zones; twelve months after Hall began working undercover, the SOE finally decided to send more female agents into the field. Her efficiency also drew attention from the enemy forces, however, and it wasn't long before the Gestapo was on the hunt for "the Limping Lady," who they knew only from a composite sketch. Their internal communications declared: "She is the most dangerous of all Allied spies. We must find and destroy her." With Gestapo agents - including notorious investigator Klaus Barbie, who would later be awarded the Iron Cross for torturing and executing thousands of resisters - closing in on her after the Germans seized control of Vichy France in November 1942, Hall was forced to flee to Spain. 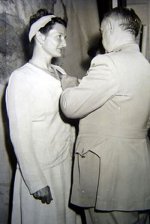 Escape meant a three day journey on foot in heavy snow across the Pyrenees mountains, a task made even more challenging with an 8-pound artificial leg bound to her body with straps and a belt at the waist. At one point, she jokingly mentioned in a message to the SOE that she was concerned that Cuthbert would cause problems during her escape; not recognizing the nickname she used for her prosthetic, SOE headquarters responded, "If Cuthbert is giving you difficulty, have him eliminated." When she arrived in Spain, she was arrested and imprisoned for illegally entering the country; it took six weeks before an inmate being released was able to get word to American officials in Barcelona about her presence so they could arrange her release. She finally made it back to London in January 1943, where she was quietly made a honorary Member of the Order of the British Empire (MBE).

After the SOE refused to send her back to France fearing it was too dangerous with her high profile, Hall decided to join the American Office of Strategic Services (OSS), which was just establishing their own intelligence operation in France. With huge numbers of Nazi troops now in the country, Hall took even more extreme measures to disguise herself. Among them, Sonia Purnell, author of A Woman of No Importance: The Untold Story of the American Spy Who Helped Win World War II, recounts that Hall had a "fierce, a rather sort of scary London dentist to grind down her lovely, white American teeth so that she looked like a French milkmaid." In the Haute-Loire region of central France, she disguised herself as an elderly milkmaid and got to work on her radio, coordinating airdrops of arms and supplies for the resistance fighters who were blowing up bridges and sabotaging troop trains, and reporting German troop movements to Allied forces.

Her second tour in France in 1944 and 1945 was even more successful than her first, and at its peak, her network consisted of 1,500 people. With the Germans constantly attempting to track her radio signals, Hall stayed on the move, camping out in barns and attics. As D-Day approached, Hall was operating as a guerrilla leader, and she armed and trained three battalions of French resistance fighters for sabotage missions that helped paved the way for the Allied invasion. One of her many radio reports shows the breadth of her missions; in it, she states that her team has destroyed four bridges, derailed freight trains, severed a key rail line, and downed telephone lines. By the war's end, Hall had spent over three full years operating undercover behind enemy lines and, in the words of an official British government report at the end of the war, she was "amazingly successful."

After the war, Hall became an intelligence analyst with the Central Intelligence Agency (CIA), which was formed after the OSS was dissolved at the end of the war. For her wartime service, she was awarded the Croix de Guerre with Palme by France and became the only civilian woman during WWII to be awarded a Distinguished Service Cross by the U.S. which recognizes exceptional valor and risk of life in combat. President Harry Truman wanted to have a public ceremony for the presentation of the medal, but Hall requested a private ceremony instead, saying that she was "still operational and most anxious to get busy." Hall worked at the CIA until she retired in 1966 and took quiet pride in her service to her country, although she always maintained a wry sense of humor about it. Her response to receiving the Distinguished Service Cross? "Not bad for a girl from Baltimore." 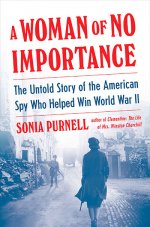