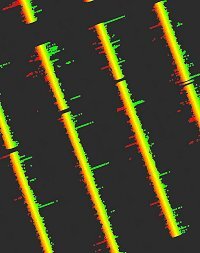 Superimposing copy number profiles of different human genomes shows each chromosome has distinctive pattern of DNA gains (shown in green) and losses (red). Yellow areas show where there is no difference (Image: Matthew Hurles)
New investigations into the code for life suggest the assumption that humans are genetically almost identical is wide of the mark, and the implications could be resounding.

Current thinking, inspired by the results five years ago from the Human Genome Project, is that the 6 billion humans alive today are 99.9% similiar when it comes to genetic content and identity.

But research published today in the journal Nature suggests we are genetically more diverse.

The repercussions could be far-reaching for medical diagnosis, new drugs and the tale of human evolution itself, the researchers say.

Until now, analysis of the genome has focused overwhelmingly on comparing differences, or polymorphisms, in the patterns of single letters in the chemical code for making and sustaining human life.

But an international consortium of scientists has taken a different tack and believes it has uncovered a complex, higher-order variation in the code.

This better explains why some individuals are vulnerable to certain diseases and respond well to specific drugs, while others swiftly fall sick or never respond to treatment, the authors believe.

Their focus has been to dig out deletions or duplications of code among relatively long sequences of individual DNA and then compare these so-called copy number variations (CNVs) across a range of volunteers of different ancestry.

The researchers were astonished to locate 1447 CNVs in nearly 2900 genes, or around one eighth of the human genetic code.

"Each one of us has a unique pattern of gains and losses of complete sections of DNA," says Dr Matthew Hurles of the UK's Wellcome Trust Sanger Institute, one of the project's partners.

"One of the real surprises of these results was just how much of our DNA varies in copy number. We estimate this to be at least 12% of the genome.

"The copy number variation that researchers had seen before was simply the tip of the iceberg, while the bulk lay submerged, undetected. We now appreciate the immense contribution of this phenomenon to genetic differences between individuals. "

Some of the missing or duplicated stretches are very long, suggesting that, like backroom switches in a protein factory, CNVs must have a big impact on gene _expression.

Nearly 16% of genes that are known to be related to disease have CNVs, the group found.

These include genes involved in rare genetic disorders such as DiGeorge, Williams-Beuren and Prader-Willi syndromes and those linked with schizophrenia, cataracts, spinal muscular atrophy and atherosclerosis.

But kidney disease, Parkinson's, Alzheimer's and vulnerability to malaria and HIV, which recent research has blamed on single-letter variations in the gene code, may also well be rooted in CNVs, the scientists believe.

"The stage is set for global studies to explore anew ... the clinical significance of human variation," say Professor Huntington Willard and Dr Kevin Shianna of the Institute for Genome Sciences and Policy at Duke University in North Carolina, in a review of the research.

Evolution is another area that will come under new scrutiny.

The Out of Africa scenario, by which Homo sapiens emerged from east Africa and spread around the globe, will not be challenged, though.

Our origins are so recent that the vast majority of CNVs, around 89%, was found to be shared among the 269 people who volunteered blood as samples for the study.

These individuals included Japanese people from Tokyo, Han Chinese from Beijing, Yoruba from Nigeria and Americans of northern and western European ancestry.

All the same, there are widespread differences in CNVs according to the three geographical origins of the samples.

This implies that, over the past 200,000 years or so, subtle variants have arisen in the genome to allow different populations of humans adapt to their different environments, according to scientists at Wellcome Trust Sanger.

The research is based on two technical advances, one in faster, accurate sequencing of DNA and the other in a powerful software programme to spot the CNVs.

Article source http://abc.net.au/science/news/stories/2006/1795367.htm?tech
We could never learn to be brave and patient, if there were only joy in the world. Helen Keller (1880 - 1960)
Replying is not possible. This forum is only available as an archive.

How horses, dogs, and cats perceive and respond to human emotion