Stop Eating The "Clean" Bit Of Mouldy Bread: It's Not Safe

Please Stop Eating The "Clean" Bit Of Moldy Bread: It's Not Safe​ 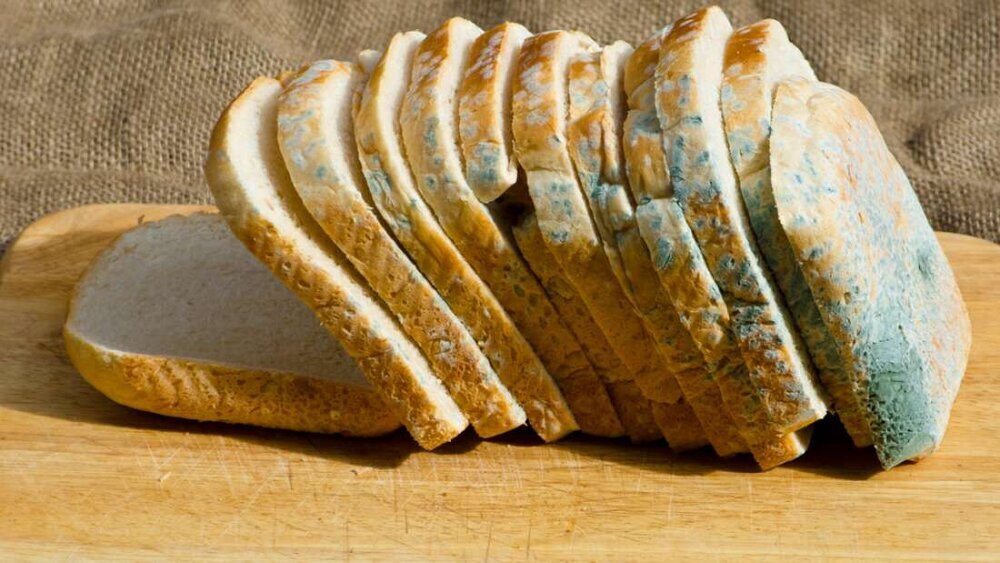 If you can see the mould, it's already too late. Image Credit: Konrack, Shutterstock.com

Food waste is a terrible thing, but busy lives make it easy to lose track of what’s expiring first in the kitchen cupboard. There are some foods you can rely on to be quite transparent with their state of decay, but some can be much more inconspicuous. If you’ve ever cut or scraped off the green stuff growing on a piece of bread, you may have fallen victim to a sneakier breed of decay.

Most of the mould that affects food is a type of fungus, arguably one of the most secretive kingdoms on Earth that’s separated from animals and plants as eukaryotes. Their fruiting bodies sit loud and proud atop whatever soil they have fixed themselves to but underneath rages a war of fungus and host that stretches beyond the visible mould we can see on the bread’s surface. Slime mould, an organism that can aggregate to form a colony and move around the environment, isn’t included in this group as they are actually a type of amoeba.


Depending on the food, mould can seep deep into its core using a series of roots called hyphae that spread very easily through soft foods, like bread. Some are safe to eat and are even selected by humans for consumption, including those used to create "blue" cheese and soy sauce. However, there are many other moulds that are to be avoided and if you eat their visible fruiting bodies or the hyphae hidden below, you could find yourself in a medical emergency.

Unfortunately for you and that bread you were saving, it’s also unlikely that only one slice within a bagged loaf has been infected. Visible mould indicates the fungus has reached the reproductive stage, sending spores out that will easily and swiftly start working their way through the rest of the bread.

While it’s true you could get lucky and have a benign species of mold on your bread, spotting the difference between good and bad mould is almost impossible and the threat applies to any food item that’s been contaminated. A report on mouldy bread from Business Insider details the case of an elderly couple who were taken to hospital with severe muscle tremors after eating some mouldy canned soup. The perpetrator was Penicillium crustosum (yes, like the antibiotic), which is known to release mycotoxins, a type of poison.

“The effects of some food-borne mycotoxins are acute with symptoms of severe illness appearing quickly after consumption of food products contaminated with mycotoxins,” says the World Health Organization (WHO) on its website. “Other mycotoxins occurring in food have been linked to long-term effects on health, including the induction of cancers and immune deficiency. Of the several hundred mycotoxins identified so far, about a dozen have gained the most attention due to their severe effects on human health and their occurrences in food.”

The allure of a good sandwich is undeniable, but it’s not worth risking your health. If you’re worried about food waste, you can always freeze fresh bread to keep it for longer. Just make sure you get to it before the mould does.
Hakuna Matata — no worries, no trouble, take it easy

MVP
I used to have this problem whenever I didn't freeze my bread. Especially in autumn months because I'd make my sandwich for work without turning on a light... Then discover mold on the bread when I got it out at lunch time, so it'd be straight in the bin.

Even now I bought some bread rolls yesterday and am planning on how I'll fit them into the freezer tonight at the latest (they'll fit once I eat the last of the ice cream ).
Replying is not possible. This forum is only available as an archive.

Healing from an Eating Disorder: How to Stop Hating Yourself and Your Body