Impossible and Beyond: How healthy are these meatless burgers?

Impossible and Beyond: How healthy are these meatless burgers? by Emily Gelsomin, MLA, RD, LDN, Harvard Health Blog
August 15, 2019 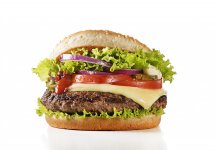 Plant-based burgers are not a novel concept. But new products designed to taste like meat are now being marketed to vegetarians and meat-eaters alike. Impossible Burger and Beyond Meat’s Beyond Burger are two such options. Eating these burgers is touted as a strategy to save the earth, casting meat as a prehistoric concept. Both brands also offer up their products as nutritious alternatives to animal protein.

But how do they stack up? It turns out the answer may depend on whether your priorities lie with your personal health or the health of the planet.

The good news: Meatless burgers are a good source of protein, vitamins, and minerals
The protein content of these newer plant-based burgers has been created to compete with beef and poultry gram for gram. Both the Impossible Burger and Beyond Burger have comparable amounts, the former deriving protein mainly from soy and the later from peas and mung beans.

Impossible Burger also adds vitamins and minerals found in animal proteins — like vitamin B[SUB]12[/SUB] and zinc — in amounts equal to (and in some cases, greater than) both red meat and poultry. This is a plus for vegetarians, because these nutrients are typically harder to come by when relying solely on foods from the plant kingdom. Vitamin B[SUB]12[/SUB], for instance, is found primarily in animal sources, and strict vegetarians and vegans must get their intake from fortified sources. What’s more, plant compounds such as phytic acid bind to minerals, which can increase requirements of zinc by 50% and may necessitate consuming about two times as much iron. For those who eat at least some animal protein, the vitamin and mineral fortification is less of a selling point.

This doesn’t mean a plant-focused diet is lacking in nutrients. Beans, for instance, are a good source of both zinc and iron. They are also an important protein resource. Black bean burgers are never going to be mistaken for hamburgers, but they are typically a solid choice when it comes to health.

The bad news: Meatless burgers are heavily processed and high in saturated fat
The same can’t necessarily be said of the aforementioned beef substitutes, which have been created to mimic what many people love about a burger — the red juicy center and meaty taste. Along with the ambition to replicate hamburgers comes a comparable amount of saturated fat. Since diets higher in saturated fat are associated with increased rates of both heart disease and premature death, they may not be the type to opt for if your ambitions are purely health-related. They are also a significant source of sodium, particularly for those on salt-restricted diets.


Even though legumes are sourced for protein in the branded meatless options, their health benefits are somewhat blunted by the high degree of processing involved. For instance, moderate amounts of whole soy foods, like edamame (soybeans), have been linked to reduced rates of cancer. This protection is often attributed to isoflavones, a subgroup of plant compounds called flavonoids thought to provide health benefits. Unfortunately, in the case of the Impossible Burger, one serving contains less than 8% of the isoflavones found in one serving of whole soy foods (one serving is roughly a quarter of a block of tofu or 1 cup of soymilk).

Poultry-based burger alternatives, such as turkey burgers, also do not contain significant amounts of protective plant compounds. On the other hand, they offer less saturated fat.

If a lower risk of diseases like cancer and heart disease is your ultimate goal, aim for the kind of veggie burgers that showcase their beans, grains, and seeds front and center. Choose legume-based varieties studded with seeds and whole grains, like brown rice and quinoa.

The bottom line: Meatless burgers are good for the planet, but not always good for our health
If you love the taste of a burger, but find the sustainability of raising cattle hard to stomach, beefless alternatives that mimic the real thing are worth a try. Producing the newer, plant-based burgers requires considerably less water and generates substantially less greenhouse gas emissions compared with traditional beef burgers. This is certainly an important consideration for the well-being of our planet, but they may not be the best option for the health of our bodies.

In most respects, the two meatless burgers still look like a decent alternative nutritionally compared to beef.

But in regular fast food beef burgers like McDonald's, Wendy's, Burger King, etc., there is a lot more salt in the bun than in the actual burger.

What is not clear in studies like this is what they are comparing. Are the buns included in all comparisons? If you look at what's listed for the beef burger, that's clearly not the case. Just check with the nutritional ratings of any of the fast food burgers (Google it).

Do the veggie burgers include the bun? I can't tell.

Why not compare the burgers one is actually likely to buy and eat from a restaurant? That would I think provide a much better and more accurate picture of what the consumer is actually consuming.

And it could be worse 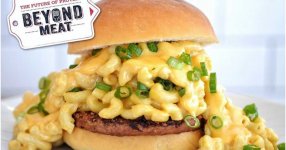 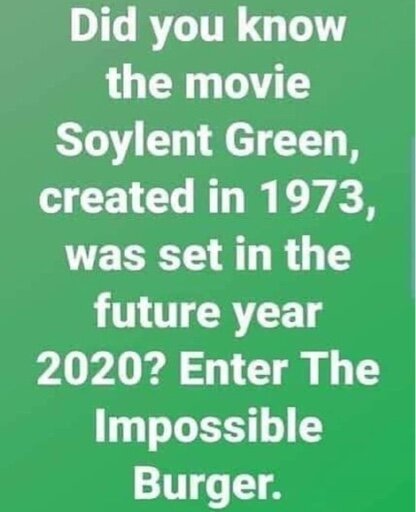 Went to Costco today and was happy to buy Beyond Burgers for relatively cheap. 8 patties for $15 USD:

Beyond Burgers are coming to Costco - CNN

Since I don't go to Costco as much now, I sometimes make burgers using the new fake ground beefs. (You get 12 oz of ground "beef" for the price of two fake 4 oz burgers.)

Soon I am going to try to make "meatloaf."

Soon I am going to try to make "meatloaf."
Click to expand...

But I’m guessing they’re not made with real shepherds, right?

The award for best article title goes to:

Is a Healthy Plant-Based Burger 'Impossible?'

The article argues that some of the veggie burgers that have been on the market for years are healthier since they have a greater variety of vegetables and a lot less processing. Of course, they also can taste like mush

The Impossible Burger ground "beef" is now available in our local Safeway grocery store ($8 USD for 12 oz, which isn't too bad).

My husband loves it since ground beef was his favorite thing to eat before becoming a vegetarian. I think it tastes a little too much like the real thing, so I mix in Mrs. Dash and other spices into the pre-cooked "beef." And I put a lot of ketchup on my burgers anyway.

We also made Swedish meatballs, etc. with them. I am going to use them also when we have company. Our relatives cannot tell the difference when we had them try it. For me, it is something for variety, but the less processed veggie burgers made with black beans, etc. are just as tasty.

The Impossible Burger cooks and looks like the real thing (except it cooks faster):

I cooked 4 Impossible Burgers at home, and it felt bizarrely familiar - these are the best and worst parts of the experience 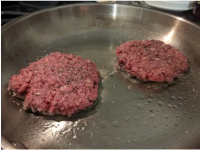 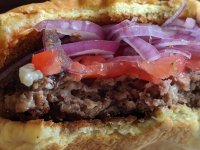 Ultra-processed foods (a term which we use to include ultra-processed drinks in this article) tend to be highly palatable, convenient, shelf stable, and affordable, and are often marketed in ways that appeal to children. These characteristics may explain why, in high income and, increasingly, in middle-income countries, ultra-processed foods consistently account for more than 50% of dietary energy. However, evidence is growing that consumption of ultra-processed foods is associated with increased risk of non-communicable disease, presenting a public health challenge.

No cows required: This startup's lab-grown milk is identical to the real thing
Dec 2020

Remilk’s process uses something called microbial fermentation in which milk proteins are reproduced in a tank to create real dairy that’s functionally identical to cow milk without the need for a cow...

The company aims to have its first product, a mozzarella cheese, on the shelves by the end of next year at a price that's comparable with the stuff you'd find in Trader Joe's or wherever else you buy your cheese.

The recent $11.3 million funding will help the team scale up the process. “Right now we’re using anywhere from 20- to 100-liter tanks,” Wolff said. But the system, meaning the process and the microbes, works the same if you put them in a 20-liter tank or a 100,000-liter tank. What changes dramatically is the price.”

The price, that is, and the potential impact this could have. Coming soon to a store near you.

5 New Menu Items McDonalds Is Releasing This Year | Eat This Not That
January 28, 2021

Finally, McDonald's is rolling out a plant-based meat burger this year. While we still don't have a firm release date for the new vegetarian option, we do know the sandwich will feature an original meatless patty created in collaboration with Beyond Meat.

Ian Borden, McDonald's international president, hinted that the McPlant was likely only the beginning of a whole line of plant-based options. "In the future, McPlant could extend across a line of plant-based products including burgers, chicken-substitutes, and breakfast sandwiches," he said following the announcement.
You must log in or register to reply here.
Share:
Facebook Twitter Email Link