International OCD Foundation | 25 Tips for Succeeding in Your OCD Treatment

by Fred Penzel, PhDPsychologist/Executive Director; Western Suffolk Psychological ServicesIOCDF Scientific & Clinical Advisory Board Member This article was initially published in the Summer 2014 edition of the OCD Newsletter. I originally wrote this list for my own patients, and then I...

Remember that OCD was known as the Doubting Disease, and it will try to cast doubt on anything that is important to you.

Daniel said:
Remember that OCD was known as the Doubting Disease, and it will try to cast doubt on anything that is important to you.
Click to expand...

Exactly! This is the key, one of the fundamentals of OCD. Think of it as The Spoiler. Those intrusive OCD thoughts will try to ruin anything and everything for you, especially those things that are most important to you, your self-image and self-esteem, and your well-being.

It is a dreadful entity. Like that psychopathic critical classmate at school, or work mate, or that mean family member who just always has to put you down and is never happy until s/he has upset you. That OCD voice is just a horrible, mean, terrible person whose main goal is to make you unhappy.

Out beyond ideas of wrongdoing and rightdoing,
there is a field. I’ll meet you there.

When the soul lies down in that grass,
the world is too full to talk about.
Ideas, language, even the phrase ‘each other’
doesn’t make any sense.

Patients with OCD often report a “fear of losing control” over their thoughts and actions, despite appearing calm and collected to outside observers. This ability to go on with day-to-day actions, despite internal chaos, leads many individuals with OCD to suffer in silence. Here, the discordant results between self-reported impulsivity and objective impulsivity showcase the dichotomy between internal experiences and external expression in people with OCD. This might help explain the fear of acting out (e.g., self-harm, harming others, unwanted sexual acts, violation of religious rules, immoral behavior) in individuals with OCD, despite their lack of history of acting in these ways. These study results can help clinicians reassure patients with OCD that their concern for acting impulsively is actually a subjective experience rather than an objective risk.

Amazon.com: The Man Who Couldn't Stop: OCD and the True Story of a Life Lost in Thought eBook: Adam, David: Kindle Store

Amazon.com: The Man Who Couldn't Stop: OCD and the True Story of a Life Lost in Thought eBook: Adam, David: Kindle Store
www.amazon.com

Adam, an editor at Nature and an accomplished science writer, has suffered from obsessive-compulsive disorder for twenty years, and The Man Who Couldn't Stop is his unflinchingly honest attempt to understand the condition and his experiences....At what point does a harmless idea, a snowflake in a clear summer sky, become a blinding blizzard of unwanted thoughts? Drawing on the latest research on the brain, as well as historical accounts of patients and their treatments, this is a book that will challenge the way you think about what is normal and what is mental illness.


"OCD lives in people who cannot tolerate uncertainty about that theme...We need to do the opposite of that...OCD only lives in you if you respond "properly.""
Last edited: May 17, 2021

Live webinar by the ADAA on May 20th (cost is $10 but recorded version will apparently be free):

Mindfulness Based CBT to Move Past Intrusive Thought OCD | Anxiety and Depression Association of America, ADAA

Mindfulness can be a helpful tool to understand and manage intrusive thoughts. In this webinar, Drs. Kissen & Greene will share tips and tools to apply mindfulness to these thoughts. Doing so will help you reduce anxiety and cope with the thoughts in a healthy way.

The webinar is the second of a two-part series and it is recommended that you watch part one prior to watching part two.

Wells (2000, 2005, 2007) has suggested meta-cognitive therapeutic strategies that are expected to reduce self-focused attention and the need to control one’s own thoughts (‘‘detached mindfulness’’). On the basis of our findings one could propose: If (meta-)cognitive therapy succeeds in reducing cognitive self- consciousness it should be able to simultaneously diminish both obsessive-compulsive symptoms and verbal memory problems in OCD. The OCD In Us All: Study Finds Almost Everyone Has Intrusive Thoughts

A study finds that virtually everyone has unwanted, intrusive thoughts typical of Obsessive-Compulsive Disorder. The difference tends to be how frequently they occur and how much they upset the person thinking them.

"OCD patients experience these thoughts more often and are more upset by them, but the thoughts themselves seem to be indistinguishable from those occurring in the general population. We're more similar than we are different."

Adult Attachment Style, Obsessive-Compulsiveness, and Response to a Stressful Situation

In order to prevent future obsessive-compulsiveness in their children, parents could utilize strategies to make their relationship with their newborn or infant more secure. Regarding treatment of OCD, clinicians could try to reduce avoidance in their patients. Knowing one’s attachment style could generally help people be aware of their predisposition to be obsessive-compulsive. Finally, the study’s findings stress the importance of openness, closeness, and empathy in romantic, platonic, and familial relationships. 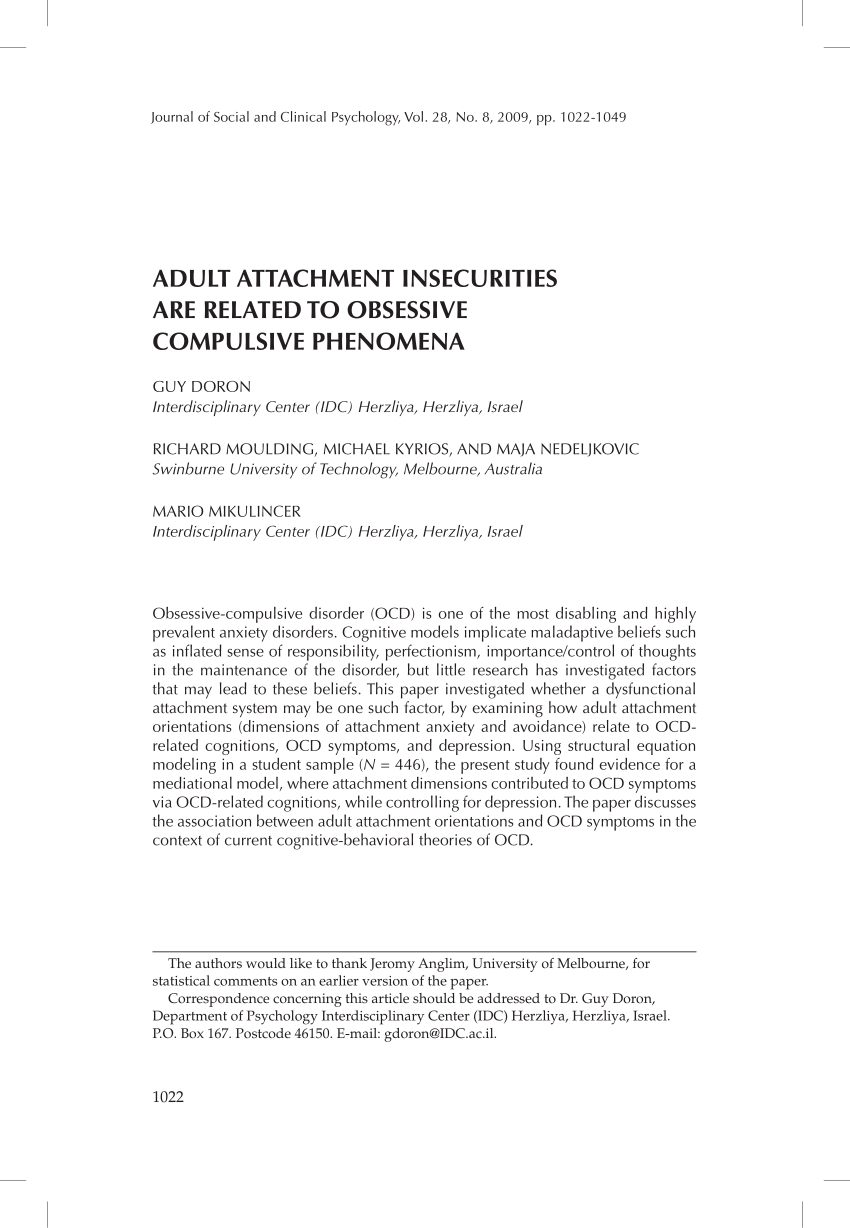 PDF | Obsessive-compulsive disorder (OCd) is one of the most disabling and highly prevalent anxiety disorders. Cognitive models implicate maladaptive... | Find, read and cite all the research you need on ResearchGate

Cognitive models implicate maladaptive beliefs such as inflated sense of responsibility, perfectionism, importance/control of thoughts in the maintenance of the disorder, but little research has investigated factors that may lead to these beliefs. this paper investigated whether a dysfunctional attachment system may be one such factor, by examining how adult attachment orientations (dimensions of attachment anxiety and avoidance) relate to OCD-related cognitions, OCD symptoms, and depression. Using structural equation modeling in a student sample (N = 446), the present study found evidence for a mediational model, where attachment dimensions contributed to OCD symptoms via OCD-related cognitions, while controlling for depression.

• INC improves significantly but modestly in CBT, with small-to-medium effects.

• Tailoring treatments and the measure of INC used moderate the degree of INC change.

• Compared to harm avoidance, INC may be poorly understood, identified, and targeted.


For cognitive interventions, Summerfeldt (2007) proposes altering subjective appraisals of INC feelings as unbearable or causing un-controllable discomfort, including a focus on reframing, reattributing, and relabeling the sensations. INC sensations might be reframed, for instance, as false messages from the brain, a phenomenon universally experienced and not inherently problematic, or a mere incongruence between reality and one's desired perceptual state. In one case study, for instance, the therapist focuses on restructuring the meaning of INC feelings related to asymmetry, reviewing how symmetry is neither “inherently good [nor] bad” but, rather, “perceived one way or theother depending on how the viewer thinks about it” (Timpano et al.,2016). In addition, the finding that only certain cognitive distortions are implicated in INC OCD suggests that CT for INC might include a greater emphasis on acceptance, mindfulness, and enhancing tolerance of uncertainty and imperfection than traditional CT for OCD, and less of a focus on correcting distorted beliefs about responsibility and the importance of thoughts (Bragdon & Coles, 2017)
Last edited: Jun 12, 2021

OCD as a Stopping Problem

When Too Much Is Not Enough: Obsessive-Compulsive Disorder as a Pathology of Stopping, Rather than Starting January 26, 2012 Background In obsessive-compulsive disorder (OCD), individuals feel compelled to repeatedly perform security-related behaviors, even though these behaviours seem...

These results are the first to show that OCD is characterized by a reduced ability of security-related behavior to terminate motivation evoked by potential danger, rather than a heightened initial sensitivity to potential threat...

Manipulation of compulsive behavior patterns and their negative-feedback function may offer new avenues for treatment. The basic idea would be to develop techniques to teach, or compensate for the weakness of, the security-satiety or stop signal. For example, some work suggests that hypnotic suggestions [73] and biofeedback [42], [43] can either block or attenuate confidence in internal signals. Hence, it is possible that such techniques can also be used to intensify or enhance the internal stop signal. Pharmacological interventions might also be developed for such enhancement.

These results are the first to show that OCD is characterized by a reduced ability of security-related behavior to terminate motivation evoked by potential danger, rather than a heightened initial sensitivity to potential threat...
Click to expand...

Excellent and in my opinion very accurate description and recharacterization of the problem as one of stopping cognitive and emotional responses to perceived, predicted, or imagined threat rather than the initial response, which is often (usually?) quite normal. It's the inability to let go of the recurring and self-reinforcing reactions that creates the problem for OCD sufferers.

For some, distraction works but this can be difficult.

For some, various thought-stopping techniques may work but again this can be difficult.

For others, venting ("emptying the mind of the thoughts") can work but it's tricky because the same process can reinforce and retrigger the reactions.

The goal of inference-based therapy is to reorient clients towards trusting the senses and relating to reality in a normal, non-effortful way. Differences between normal and obsessional doubts are presented, and clients are encouraged to use their senses and reasoning as they do in non-obsessive-compulsive disorder situations. The exact moment where client cross over from reality to a possibility is identified, and clients are invited to go back to reality, use their senses, and tolerate the void of trusting the senses rather than enacting compulsive behaviors. 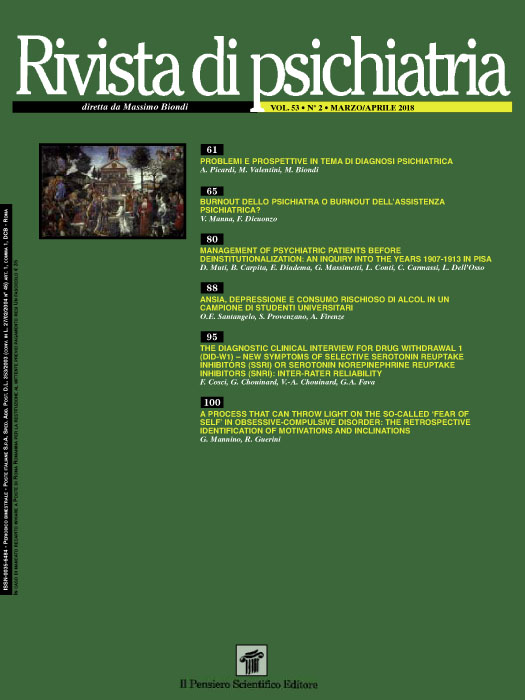 A process that can throw light on the so-called ‘fear of self’ in obsessive-compulsive disorder: the Retrospective Identification of Motivations and Inclinations | Rivista di Psichiatria

In recent years, to better understand the psychopathology of Obsessive-Compulsive Disorder (OCD), increasing attention has been paid to the so-called ‘fear of self’, that is the fear of people with OCD of housing in their inner unacceptable aspects of Self. However, the exact dynamics of the phenomenon is still unclear: to better clarify it, a specific psychological process, termed Retrospective Identification of Motivations and Inclinations (RIMI), will be described here. When a patient with OCD evaluates his/her inner experience (thought, emotion, imagery, etc.) or own behavior in some way as unacceptable, he/she will identify in a retrospective way the alleged negative motivations/inclinations which would have been the source of that experience or behavior. RIMI, not only helps to better understand ‘Fear of Self’, but has also important implications for the therapy.
You must log in or register to reply here.
Share:
Facebook Twitter Email Link