Coping Tip of the Day

20 Signs You Are Too Self-Critical

If you analyze mistakes past the point of learning something valuable, then you're probably punishing yourself unnecessarily.

New research uncovers the psychological benefits of treating the weekend like a vacation
November 25, 2020

A series of experiments found that simply following the prompt "treat this weekend like a vacation" led workers to a more enjoyable two days off and a happier return to work on Monday. The findings were published in Social Psychological and Personality Science...

In line with the researchers’ predictions, workers who had been told to treat the weekend like a vacation reported greater positive affect, less negative affect, and greater satisfaction when back at work on Monday, compared to those instructed to treat the weekend like they normally would. They also reported a greater focus on the present moment during their weekend — and this focus on the present partly explained their greater happiness on Monday... 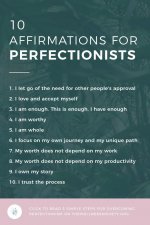 A Science-Based Technique for Coping With Stress

In simple terms, the technique involves reflecting on your stressful experience from an outside perspective. This is accomplished by a change of pronouns. Instead of using the first person “I” in your internal monologue, you can use your name, the second-person generic “you,” the third-person pronouns “he, she, they,” or even a “fly on the wall” perspective. For example, let's assume I'm facing a problem, or reflecting on an emotionally stressful situation I've experienced. Instead of thinking, “How will I solve this problem?” or, "How am I feeling about what happened?" I may ask myself “How is Noam going to solve this problem?” or "How is Noam feeling about what happened?" or “How will you solve the problem?” or, “What's the 'fly on the wall’ perspective on what happened?” etc.

Avoid unsupportive people. Until I feel stronger, I simply need to stay away from the folks in my life that believe that I'm only feeling badly because I want to feel badly. If that means skipping a family dinner, then I need to do that.

What to Do When You Can't Seem to Love Yourself

When you dip into a dark hole, focus not on why you are lacking self-esteem, but on your bounce-back rate.

How quickly can you go from feeling insecure, inadequate, and shameful to coming back to feeling enough?

Take count, not on how many times you fall down, but instead on how quickly you manage to come back. When you fall back into negative thoughts and patterns, use it as your signal to shift and to remind yourself that you are enough.

“Nobody had ever said to me before, "You need to live a life that you can cope with, not the one that other people want. Start saying no. Just do one thing a day. No more than two social events in a week." I owe my life to him.”

Take a 3x5 index card and fold the 5″ side in half. It should look like a little tent. Each of the things you include on this card should be as personal as possible.

On the top inside flap write down 5 things you can think and say to yourself to help you tolerate the distress.

On the bottom inside flap write down 10 things that you can do to help you soothe yourself. These things should include things you can do when at home or out, during the day or night.

Back of the Card

On the back of the card you should write down at least 5 phone numbers of people in your support system that are empathetic and helpful to you when you are in crisis. Include the crisis hotline in your area.

Self-Care Is Not Self-Indulgent


Taking the time to listen to beautiful music, read an inspirational piece, taste delicious flavors, bring home a fragrant bunch of flowers to brighten up your space all speak to your soul, your inner self. This is not self-indulgent, it is a smart way to care for yourself using all the effective tools and resources available so that you can then function in the world and contribute back to others. You feel better about yourself, stand up straighter, regard yourself in a different light. 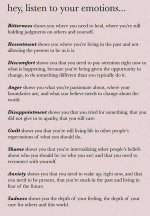 ^^^ Some truths in there but a bit of an oversimplification.

In The Emotional Brain, Joseph LeDoux, a professor of neuroscience at New York University, explains the "fear system" in laboratory animals and humans.

The almond-shaped clump of tissue called the amygdala can be a real troublemaker. Whenever you sense potential danger (26 voice-mails on your cell phone coming to life like the Nutcracker), the amygdala triggers an "oh, crap!" reaction, pumping adrenaline and other (not so great) hormones into your bloodstream.

A fraction of a second later, the higher, more educated, evolved, sophisticated (Harvard professor type) region of the brain gets the signal and takes on the case, digging for the truth, sometimes accusing the amygdala of being an over-reactive alarmist.

Unfortunately we experience the fear more vividly than we do the rational response, and make decisions based on the immature brat of an amygdala.

The trick is teaching the amygdala to chill out while you get the real story from the upper regions of the brain, where you'll get a more thoughtful, considerate analysis.

Cognitive Distortions of Magnification and Minimization

When thinking with the cognitive distortion known as magnification and minimization, one of two things happens: the importance of insignificant events--like a mistake--is exaggerated, or the importance of something significant--such as a personal achievement--is lessened. In other words, a person's problems are blown out proportion, while the positive aspects of their lives are ignored.

People prone to panic attacks often fall experience this cognitive distortion, which magnifies fears and maladaptive behaviors, while minimizing their ability to cope...

It can be difficult to notice at first, but even many bad situations can have a silver lining. Also, try to keep in mind that no one is perfect. Don't let your small mistakes or flaws overshadow all of your talents and achievements, and the beauty and specialness of simply being you.

The technique consists of confronting the worst-case scenario of a feared event or object, using mental imagery to examine whether the effects of the event or object have been overestimated (magnified or exaggerated) and where the patient's coping skills have been underestimated. The term was coined by Albert Ellis, and various versions of the technique have been developed, most notably by Aaron T. Beck.

Decatastrophizing is also called the "what if" technique, because the worst-case scenario is confronted by asking: "What if the feared event or object happened, what would occur then?"

The following is an example:

The foundation of CT [cognitive therapy] is the cognitive hypothesis: it is not a situation that in and of itself determines what we feel but rather the way we construe a situation (A. Beck, 1964). A reasonable question, however, is whether this model is too simplistic in the context of cancer. For example, is a patient with severe or metastatic cancer more likely to be depressed than one with a small tumor that was caught early? Or if a patient is closer to death, will he or she be more depressed and anxious? Research, in fact, supports the cognitive hypothesis even in the setting of medical illness. For example, depression and anxiety levels are similar in patients with metastatic versus early breast cancer (Kissane et al., 2004), and rates of mental disorders and existential distress do not increase as death from cancer approaches (Lichtenthal et al., 2008).

40 Risks Everyone Should Take Before Turning 40 | The Healthy

…like yesterday. In terms of how your energy is spent, Erin Wathen, life and wellness coach, says it is never smart to surround yourself with toxicity. Though it might be easy to spot a damaging love relationship, unsupportive friendships can be harder to discern and even more demoralizing. “The perpetrator could be your best friend from college, your boss, or even your brother. Don’t be scared to live by design and know you have to make space for people who truly get you,” she says. 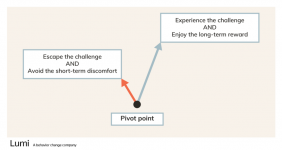 Escaping the challenge gives us a small, short-term reward, and experiencing the challenge gives us a larger, long-term reward. Parents are faced with these pivot points every day. We might not want to ask our child to do their homework, because it has led to tantrum behaviors in the past. However, following through with the demand, and facing the discomfort of our child being temporarily upset, means that our child will be more successful at school in the long run. Defining your values as a parent, and committing to act in service of these values, even when it is difficult, brings long-term rewards for you and your family.
You must log in or register to reply here.
Share:
Facebook Twitter Email Link