“Don’t light yourself on fire trying to brighten someone else’s existence.”

“Leaving an abusive partner is a very difficult thing to do. It frequently feels like you are failing, or destroying your family, or not trying to work things out, or not giving your partner a second chance.”

“Never let someone who contributes so little to a relationship control so much of it.”

“You survived the abuse, you’re going to survive the recovery.”

"As long as women are fundamentally seen as less worthy than men, the violence they experience directly in abusive relationships will simply be repeated in other, subtler ways throughout their lives, as they move from the men who attack them to the bosses who pay them less or the male co-workers who denigrate their contributions."

“The boys had always been her reason to stay, but now for the first time they were her reason to leave. She’d allowed violence to become a normal part of their life.”

"It's hard for most of us to go through a typical day outside the home without some humiliating incident, however trivial, without some frustrating reminder of how limited our power is, how unimportant we are. The relationships we want to spend our lives in should be a refuge from this. If they are just a source of more humiliation, they're not healthy places to stay in."

― Mira Kirshenbaum, Too Good to Leave, Too Bad to Stay

Women hear it all the time from men. "You're overreacting," we tell them. "Don't worry about it so much, you're over-thinking it." "Don't be so sensitive." "Don't be crazy." It's a form of gaslighting -- telling women that their feelings are just wrong, that they don't have the right to feel the way that they do. Minimizing somebody else's feelings is a way of controlling them. If they no longer trust their own feelings and instincts, they come to rely on someone else to tell them how they're supposed to feel. 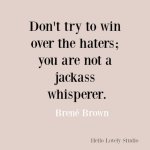 Do You Confuse Admiration with Love? Tales of a Covert Narcissist

“When someone shows you who they are, believe them the first time.” 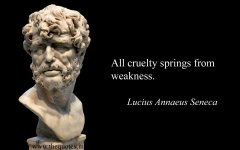 "There are few lives untouched by narcissists. These relationships infect those who are in them with self-doubt, despair, confusion, anxiety, depression, and the chronic feeling of being "not enough," all of which make it so difficult to step away and set boundaries."

~ publisher's description for "Don't You Know Who I Am?": How to Stay Sane in an Era of Narcissism, Entitlement, and Incivility

“There'a a phrase, "the elephant in the living room", which purports to describe what it's like to live with a drug addict, an alcoholic, an abuser. People outside such relationships will sometimes ask, "How could you let such a business go on for so many years? Didn't you see the elephant in the living room?" And it's so hard for anyone living in a more normal situation to understand the answer that comes closest to the truth; "I'm sorry, but it was there when I moved in. I didn't know it was an elephant; I thought it was part of the furniture." There comes an aha-moment for some folks―the lucky ones―when they suddenly recognize the difference.”

“YOUR ABUSIVE PARTNER DOESN’T HAVE A PROBLEM WITH HIS ANGER; HE HAS A PROBLEM WITH YOUR ANGER.
One of the basic human rights he takes away from you is the right to be angry with him. No matter how badly he treats you, he believes that your voice shouldn’t rise and your blood shouldn’t boil. The privilege of rage is reserved for him alone. When your anger does jump out of you—as will happen to any abused woman from time to time—he is likely to try to jam it back down your throat as quickly as he can. Then he uses your anger against you to prove what an irrational person you are. Abuse can make you feel straitjacketed. You may develop physical or emotional reactions to swallowing your anger, such as depression, nightmares, emotional numbing, or eating and sleeping problems, which your partner may use as an excuse to belittle you further or make you feel crazy.”

“An abuser can seem emotionally needy. You can get caught in a trap of catering to him, trying to fill a bottomless pit. But he’s not so much needy as entitled, so no matter how much you give him, it will never be enough. He will just keep coming up with more demands because he believes his needs are your responsibility, until you feel drained down to nothing.”

“The woman knows from living with the abusive man that there are no simple answers. Friends say: “He’s mean.” But she knows many ways in which he has been good to her. Friends say: “He treats you that way because he can get away with it. I would never let someone treat me that way.” But she knows that the times when she puts her foot down the most firmly, he responds by becoming his angriest and most intimidating. When she stands up to him, he makes her pay for it—sooner or later. Friends say: “Leave him.” But she knows it won’t be that easy. He will promise to change. He’ll get friends and relatives to feel sorry for him and pressure her to give him another chance. He’ll get severely depressed, causing her to worry whether he’ll be all right. And, depending on what style of abuser he is, she may know that he will become dangerous when she tries to leave him. She may even be concerned that he will try to take her children away from her, as some abusers do.”

― Lundy Bancroft, Why Does He Do That?: Inside the Minds of Angry and Controlling Men

I don't know why he gets to be two people, and I only get to be me, the one who is here to take what he has to give, and who is here to pick up the pieces afterward.”

― Amanda Grace, But I Love Him

“The guarantee of safety in a battering relationship can never be based upon a promise from the perpetrator, no matter how heartfelt. Rather, it must be based upon the self-protective capability of the victim. Until the victim has developed a detailed and realistic contingency plan and has demonstrated her ability to carry it out, she remains in danger of repeated abuse.”

― Judith Lewis Herman, Trauma and Recovery: The Aftermath of Violence -- From Domestic Abuse to Political Terror

“Shame is internalized when one is abandoned. Abandonment is the precise term to describe how one loses one’s authentic self and ceases to exist psychologically.”

― John Bradshaw, Healing the Shame that Binds You

“Excuses are a promise of repetition.”