1. Thanks to this device, I can control my chicken misters from anywhere.

3. Going to a Flagstaff museum tomorrow. And it will be cooler there too.
Last edited: Aug 4, 2021

BONUS: Today, husband won a 2-night stay at a local hotel. (He was the winning caller to our radio station, and we already picked up our free voucher.) Having our staycation next weekend.
Last edited: Aug 4, 2021

Hope you have fun on the staycation.

My dad calls into his local radio station sometimes to try and win things, but they're a community-run station and extremely disorganised. When he won 2 bottles of wine he had to go twice to try and pick them up, find someone who knew about it (because they didn't have a centralised list), and also had to sit there waiting for an ON-AIR break before someone came to find out what he was even doing in the building.
Another time he was meant to win one prize (I think it was tickets to some show), but when he went they'd run out of that prize, and substituted it for an office chair which had to be delivered while someone was home. Pretty good chair though.

Narrator Sir David Attenborough: "The Australians are a rugged but rather strange breed, known for distortion of the English language and feasting at Maccas on the local version of the Big Mac using Vegemite as the special sauce."

Bonus: Since we have to wear masks all day at our desks for at least the next 2 weeks, I bought 4 new reusable masks online to match my 'favourite' ones (that I was given by my workplace, after signing for them). They're being shipped so maybe I'll get them in time for next week. Until then I'm swapping between my two favourites with a wash overnight and hang up to dry during the day... Which will be fine as long as the weather stays good.

Double bonus: I'd started thinking upsetting thoughts, but then I read a misinformed post about COVID vaccination shared on fbook by someone I used to go to school with (or actually their younger sister who was a couple of years younger than me)... But being annoyed by the misinformation partially distracted me from what I was thinking. Plus 2 out of 3 comments on her shared post were saying that they disagree.
Last edited: Aug 10, 2021

Bonus: Taught my bf the box breathing technique when he was having an anxiety attack.
Last edited: Aug 15, 2021

gooblax said:
Not sure if it's the weather warming up that's making me more emotional but I don't have to be mean to myself about it if I don't want to. Spring tends to be a bit tricky for me because I'm used to sort of bracing for colder weather (as much as you count Brisbane winter as colder) but then that goes away and I'm left on-edge for nothing.
Click to expand...

Knowing/suspecting the reason doesn't seem to help that much unfortunately. I still get sucked into some self destructive thinking and getting more upset, although it hasn't been too bad yet I know it's just a matter of time.

BONUS: I think I have finally found a therapist I can easily relate to. (Fired the last one for being too religious.)

1) Made pizza with a homemade base, and it was pretty good.

2) Finally got invited by the Dept of Health to make a vaccination appointment. Took the 1st available slot by the time I saw the email which is mid October.

3) It was a good bike ride this morning and I'm not feeling quite as emotionally yuck as I was before.

I've got enough leftovers for dinner tonight (ignore the very lazy placement of spinach). But I'll have to increase my speed in making the next base. 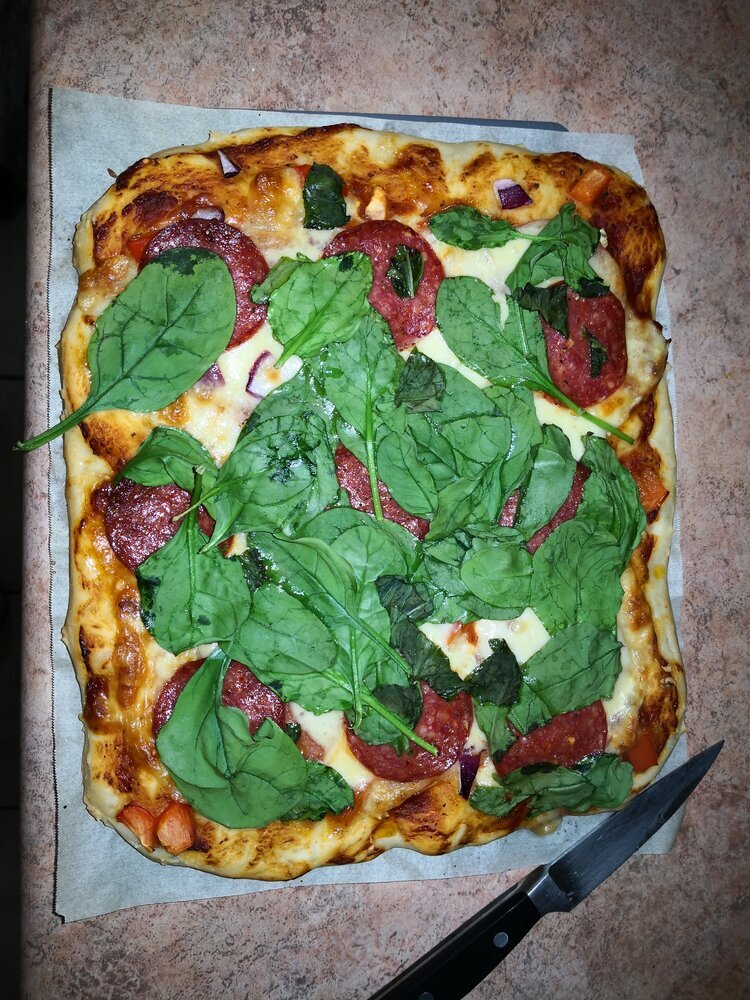